In his latest feature film L’Amant Double, prolific French director Francois Ozon offers a fantastically bonkers premise that’s likely to bewilder and enchant audiences in equal measures. Playing with classical thriller tropes, and with a heavy dose of Gallic eroticism added for good measure, the film owes more to Hitchcock and Cronenberg than to the […] 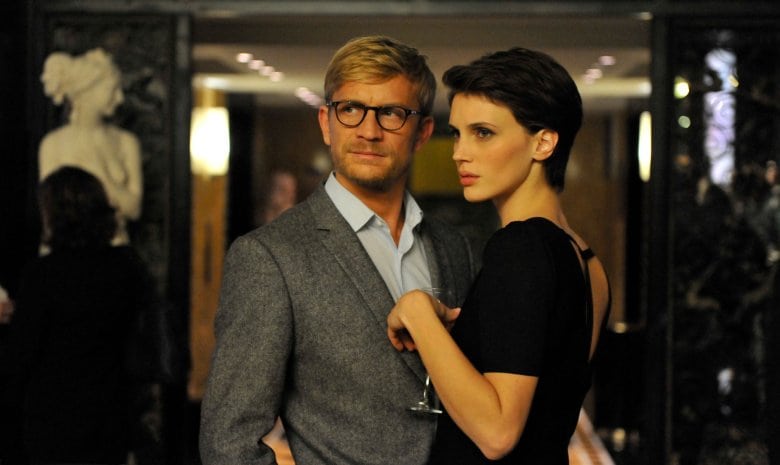 In his latest feature film L’Amant Double, prolific French director Francois Ozon offers a fantastically bonkers premise that’s likely to bewilder and enchant audiences in equal measures. Playing with classical thriller tropes, and with a heavy dose of Gallic eroticism added for good measure, the film owes more to Hitchcock and Cronenberg than to the director’s more recent offerings.

Freely adapted from Joyce Carol Oates’s novel ‘Lives Of The Twins’, L’Amant Double stars Marine Vacth as Chloe, a former model who feels that her life has been stunted by years of mental anguish and mysterious stomach aches which no doctor has been able to cure. When she starts a course of therapy with handsome psychiatrist Paul (Jérémie Renier), the two almost instantly fall in love and Marine is invited to move in with her new lover in his plush apartment overlooking the city.

Refusing to go back to her modelling days, Chloe, rather strangely, takes on a new job as a security guard in an art gallery in town. Things however take a turn for the strange when Marine discovers that Paul has a secret twin brother Louis (also played by Renier) who identical looking and who also happens to be a psychiatrist. Marine soon finds herself attracted to the cruel and sadistic Louis with whom she enters into a destructive sadomasochistic relationship behind Paul’s back.

From the outset, Ozon focuses the crux of his narrative on themes relating to duplication and duplicity in a twin-fetish charged story which isn’t afraid of pushing the boundaries of what is deemed tasteful in a deliciously befuddling storyline. Playing deliberately on the ambiguity of Marine’s own sanity, reality and fiction are intentionally blurred and we are no longer sure where reality starts or where dreams finish. Ozon frequently pushes the twin fetish further in scenes which sees both twins engaging in sexual activity with the young woman and sometimes even with each other.

While L’Amant Double might not be to everyone’s taste, what really makes it interesting is its director’s commitment to the idea he built around Oates’s novel by giving his own interpretation of the story. Both Vacth and Renier are put through the wringer in two demanding roles which rely heavily on their own interpretation of what is really happening. On the whole, the film presents a change of gear from Ozon whose last film Frantz couldn’t be more different from this one, but fear not, as there is plenty here to enjoy and relate to, despite its very otherworldly subject matter.