Bobby Robson: More Than a Manager is a well-crafted documentary that focuses on both Robson’s football and personal life. So much so that the film does not open with a typical, fawning introduction but instead we are given a detailed and grisly account of the invasive cancer surgery Robson went under shortly before landing the […] 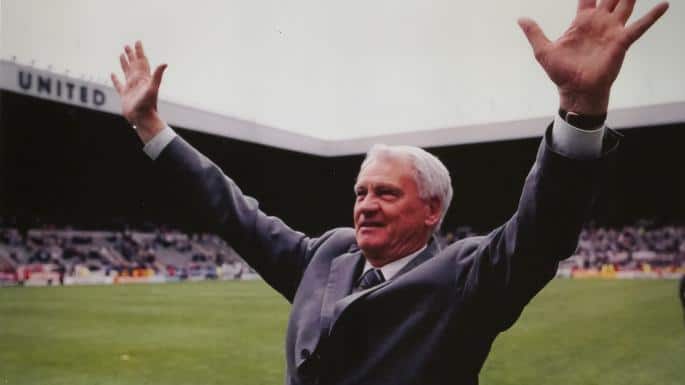 Bobby Robson: More Than a Manager is a well-crafted documentary that focuses on both Robson’s football and personal life. So much so that the film does not open with a typical, fawning introduction but instead we are given a detailed and grisly account of the invasive cancer surgery Robson went under shortly before landing the job as manager of Barcelona. Robson is instantly set up as fallible and, in a genre, where reverence so often collapses into gushing hyperbole, it is this subtle shift in dynamics that catches you off guard and clearly sets up the emotional pull of the documentary without straying into melodrama.

More Than a Manager chronicles Robson managerial life with talking head interviews from stars of the game who knew him well, such as Pep Guardiola, Sir Alex Ferguson, Alan Shearer and Ronaldo, yep, O Fenômeno himself. All of whom are able to give insight in to Robson’s great career but also the person he was too, with both Ronaldo and Shearer clearly stating how much Robson did for them personally and not just Barcelona and Newcastle.

Robson landed his dream job of managing Barcelona the season after the departure of Barca genius, Johann Cruyff. To follow in Cruyff’s footsteps must have been a daunting task and through the use of voiceover we here Robson’s account of the time and the ways in which he had to deal with both the on the pitch details and the internal politics at Barcelona. Barcelona is known for a being an oddball of a football club where political ego reigns supreme which help makes the job nigh on impossible. We see and hear Robson handle every situation presented to him with grace and a steely confidence in his own abilities as a manager and man manager. Knowing these insider details only makes the way in which he was replaced by Louis van Gaal is even more galling. Van Gaal is shown speaking only once and it is a telling moment that reveals a lot about his character.

The initial success Robson found as a manager when leading Ipswich Town is shown in the happiest light and it is clear from the interviews with Terry Butcher that are included that Robson’s passion for the game and ability to get most out of his squad of players was present from the very beginning of his career.

Two interviews that help articulate Robson’s story the most are from Jose Mourinho and Paul ‘Gazza’ Gascoigne. Mourinho was Robson’s assistant coach and interpreter at Sporting CP, Porto and Barcelona and he gives Robson credit for allowing him to see how to handle some of the best players in the world, very early on in his career which laid down fundamental ground work for Mourinho’s own career. Gazza speaks emotionally of Robson during his time playing under him for England and the profound effect Robson had on his life inside and outside of football is clear. Robson was more than just a manager for Gazza and his fatherly approach to dealing with the “daft as a brush” character worked famously, and Gazza appears to miss that guidance and fatherly relationship more than he is willing to say. The moments where Gazza is on screen are the some of the most emotional scenes in the documentary with each small vignette perfectly capturing the relationship between the pair.

Bobby Robson is still the second most successful English manager at a major tournament, only behind Alf Ramsay, he put Ipswich town on the map, guided Barcelona through a fraught period and even managed to take Newcastle to heights they could only have dreamed of, including his old stomping ground, the Camp Nou. This is slickly produced, sensitively handled and profoundly moving documentary of one of English football’s greatest managers. R.I.P Sir Bobby.