By Jim Mackney Jane, directed by Brett Morgen, is a documentary focusing on the life and groundbreaking work of Dr. Jane Goodall, touching upon her marital life, the raising of her son Hugo, and her latter years. Dr. Goodall’s work with chimpanzees has been widely documented in film and literature, but here her work seems […] 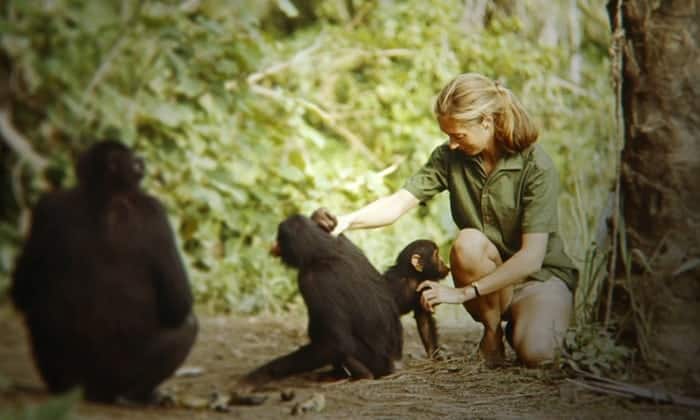 Jane, directed by Brett Morgen, is a documentary focusing on the life and groundbreaking work of Dr. Jane Goodall, touching upon her marital life, the raising of her son Hugo, and her latter years. Dr. Goodall’s work with chimpanzees has been widely documented in film and literature, but here her work seems more immediate and engaging than in previous offerings.

Jane is an interesting documentary, one that was made slightly fortuitously with the discovery of a treasure trove of previously thought lost 16mm colour video of Jane’s time in Gombe, Tanzania. This original footage, mostly shot by Jane’s ex-husband and nature filmmaker, Hugo van Lawick, is excellent, and has been lovingly restored and manipulated by Morgen. Lawick’s ability is clear, and although the images are nothing new if you have seen any Attenborough documentaries, they still have a particular zip to them that invokes the usual feeling. What makes the original footage effective is rhythmic and concise editing by Joe Beshenkovsky, whose eye for detail and use of cut-aways of the chimpanzee’s behaviour is excellent in driving the narrative. There are a little too many montages that feel like filler but overall they don’t slow the pace of the documentary.

This is the story of the self-proclaimed “strange white ape” who, according to Goodall herself, “at the time wanted to do things which men did and women didn’t” and it is clear to see why her story has been told so frequently; her discoveries around man’s four legged forefathers in modern science are unparalleled.

Dr. Goodall was chosen for the project because she precisely didn’t have a science degree level education, and was not already clouded by the leading thoughts of the time; she went on to make headlines around the world with her discoveries. This comes across during the film as an added bonus with Dr. Goodall stating, “going to Africa, living with animals. That’s all I ever thought about”.

There is a human streak to the film that is unwavering in it’s portrayal of Goodall, who we see living the life she always wanted whatever complications arose. These complications at times refer to the breakdown of her marriage to Lawick and the difficulty in raising her son in the forests of Tanzania, but this does not cause the same emotional reaction in Dr. Goodall than when her beloved chimpanzees are struck down with illness. It is as if Dr. Goodall is able to compartmentalise that other side to her life – her mothering side – but not the side in which she is researcher and scientist. It was an interesting moment in the film, and one that stuck with me longer than any of the other ‘discoveries’, many of which are now common knowledge thanks to her work.

Goodall is an engaging screen presence throughout, looking every bit the unexpected-movie star in the original footage and her determined, content self in the modern day interview. Dr. Goodall’s reading of her own book guides the narration, giving key insight in to the footage alongside Philip Glass’s sonorous score. These elements build the documentary to slightly more than the sum of its parts, but in effect the film is guided completely by the interesting and interested eponymous star at its heart.

Jane is released in cinemas on Nov. 24th