Felix Randau delivers with his satisfying, Chalcolithic revenge thriller Iceman. For those who have been waiting on a wing and a prayer for part two of The Revenant, Iñàrritu’s two and half hour DiCaprio driven epic about a fur trading frontiersmanslogging his way through the wilds of North American after being mauled by a bear […] 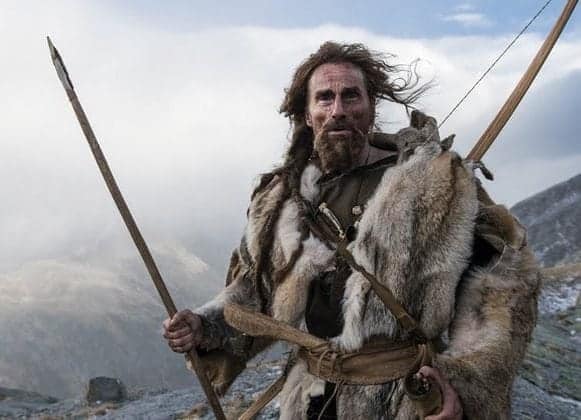 For those who have been waiting on a wing and a prayer for part two of The Revenant, Iñàrritu’s two and half hour DiCaprio driven epic about a fur trading frontiersmanslogging his way through the wilds of North American after being mauled by a bear to seek revenge on the man who killed his son, the wait may well be over.  Felix Randau’s Iceman is leaner, if not quite meaner, but a solid film nonetheless.

In 1991, two hikers in the Ötztal Alps discovered the remains of what they believed to be a recently deceased mountaineer.  Once the body was extracted from the ice in which it was frozen it was quickly determined that the remains were in fact over 5000 years old.  This is Randau’s unnecessary point of entry.  From fact, he then fictionalizes the events that may, but almost certainly didn’t, have led the man to his final resting place.  What ensues over an hour and a half is an epic fit for the small screen.

A title card informs us, before we are thrust into the action,that the dialogue will be spoken in Rhaetian, followed quickly by it won’t affect the story.  And, it doesn’t.

There’s little dialogue to begin with, and the plot’s about as straightforward as can be.

Strapped to Kaleb in a fur-clad, porta-baby carrier bag the two make their way through forests and across craggy mountain terrain.  Arrows are fired, axes are thrown and people, inevitably, end up dead.

Randau’s film is played straight.  It takes itself seriously, is solidly crafted and makes a valiant if on the nose attempt at social commentary.  Something along the lines of we, humankind, are driven by the material.

Like a piece of IKEA furniture, it’s functional, if perhaps lacking in a little imagination.

But, that doesn’t stop Iceman from being a blast.  The raid onthe village, shot with the same kinetic energy as that Emmanuel Lubezki’s Revenant opening, is a visceral, brutal, firecracker of a scene.  The ambiguity surrounding the contents of the “Tineka” box recalls Pulp Fiction and leaves you like Brad Pitt’s Dt. Mills in Seven, “What’s in the box?”  Everything zips along, the pace never dropping and even with the film’s foregone conclusion, it’s a great ride.  If not one for the cinema, definitely catch it on demand.