Billy (Alex Lawther) is a flamboyant gay kid, largely estranged from his father (Larry Pine), until he has to move for the last year of high school when his beloved mother (Bette Midler) is ‘taken ill’. In a conservative school, Billy doesn’t fit in and is at one point beaten so badly that he ends […] 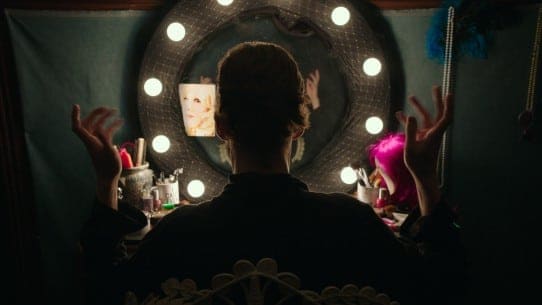 Billy (Alex Lawther) is a flamboyant gay kid, largely estranged from his father (Larry Pine), until he has to move for the last year of high school when his beloved mother (Bette Midler) is ‘taken ill’. In a conservative school, Billy doesn’t fit in and is at one point beaten so badly that he ends up in a coma. When Billy recovers Flip (Ian Nelson), the high school football star he has become unlikely friends with, suggests that he tone it down a bit. For a while, Billy tries, but this isn’t him, so instead he decides to run against the most popular girl in school (Abigail Breslin) for Homecoming queen.

Representation matters, and it is both refreshing and important to see a character of a type we don’t often see in any capacity be the lead of a movie. This is by far Freak Show’s strongest suit. In Billy Bloom it has a character that is chronically underrepresented: proudly queer, daringly different in his dress and manner, with a seemingly non-committal approach to gender. Alex Lawther gives the part his all, doing his best to make Billy feel like a rounded character with an inner life. He’s only moderately successful because, as it does for so much else in the film, the script defeats his efforts at almost every turn. Despite the fact that he, as a character, isn’t something we see frequently Billy’s conflicts, internal or external, are expressed only in the most cliche and baldly stated terms and yet, in an odd trick, they also feel underplayed.

We are told that Billy, in moving in with his Dad, has transferred to a conservative part of the south, and yet the film has absolutely no sense of place. Only Abigail Breslin even seems to attempt an accent (you’ll understand why nobody else bothered when you hear it). Despite the scenes of Billy getting bullied, and the extremity of the beating he takes at one point, the conservatism of the town is largely stated rather than expressed. For instance, in the third act when Billy runs for homecoming queen, given relatively recent controversies about gay teens and their partners being excluded from Proms, it might be expected that the school administration would try to put a stop to Billy’s run, but this goes unaddressed.

Billy is the only character we’ve not seen many times before. Around him we’ve got the Dad who struggles to express his emotions to his son, the jock who turns out to be sensitive and artistic, the bully with a secret, the bitchy prom queen and her cheer squad. So thin is the writing there is even a character, played by AnnaSophia Robb, whose lack of personality is what’s supposed to pass for her character, there is a running gag about the fact that nobody can remember her name, which runs right through to the credits, where she’s listed as ‘Blah Blah Blah’. Perhaps trying to compensate for the weak characterisation, Freak Show’s screenplay hammers its every point home. The message is well intentioned and worthwhile – that anyone should be free and proud to be exactly who they are – but there are so many speeches here that seem to have a neon sign flashing ‘THE POINT’ behind them. This also goes for the way the film’s plot progresses. I will give you one guess what the bully with a secret is hiding. This, among many other things, notably the storyline about Billy’s mother, is so nakedly signposted that the film feels like  a series of foregone conclusions.

Only the storyline between Billy and football star ‘Flip’ goes even slightly against expectations. Even if our presumptions are lightly dashed in one respect, that’s not to say their storyline is a roaring success. As with AnnaSophia Robb’s character, there isn’t much sense of why Flip would be drawn to Billy, the foundation of their friendship is stated, but like so many of the relationships in the film, it never feels like anything more than characters speaking rote motivation aloud. I don’t believe them.

Trudie Styler, making her directorial debut, makes a series of obvious choices, save for one glaringly weird moment that poses Billy and the other main characters at their table in the high school lunch room in what appears to be a direct visual quote of DaVinci’s Last Supper. It is an absurd shot. There is, to my untrained eye, nothing like this moment in the rest of the film and I am baffled as to what Styler thinks she is saying with it, certainly the symbolism doesn’t make any sense in terms of the characters. On the plus side the film is beautifully designed, with the costumes and make up complementing Alex Lawther’s performance and, along with Dante Spinotti’s cinematography, giving the film a visual beauty that is compelling even when the drama isn’t.

Freak Show is a film with a worthwhile message that it communicates poorly, despite the earnest efforts of the cast and crew. The drama is too predictable, the satire far from scathing enough, and the imagery not enough to rescue the film by itself. If you want to see the satirical side of the film (and especially Abigail Breslin’s character) done better, I would recommend the tragically underseen Saved! Representation matters, and I hope people going through the same experiences as Billy might see something of themselves in Freak Show, but ultimately the film is all surface level, and that doesn’t do Billy justice, because the whole point is looking past the surface, whatever it might look like.