The Walt Disney World Resort in Florida may promise its patrons a fairy tale dreamscape filled with beautiful princesses, handsome princes, and shining stars to wish upon. But for many of those who live in the shadow of “the most magical place on Earth” on Route 192, life is instead a relentless struggle to make […] 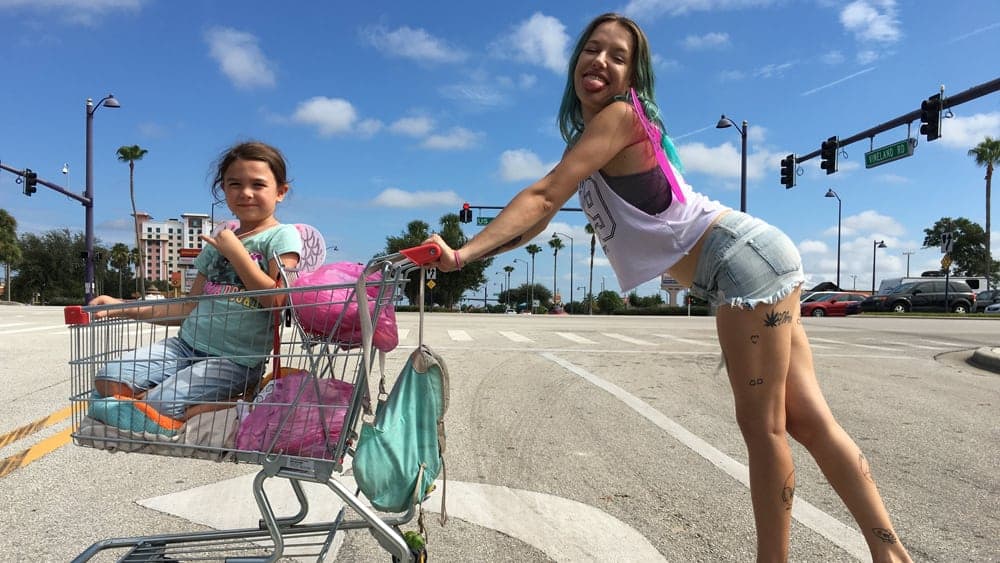 The Walt Disney World Resort in Florida may promise its patrons a fairy tale dreamscape filled with beautiful princesses, handsome princes, and shining stars to wish upon. But for many of those who live in the shadow of “the most magical place on Earth” on Route 192, life is instead a relentless struggle to make ends meet – an endless story of heartache and insecurity.

In the eyes of Moonee (Brooklynn Prince) though, a wild-hearted six-year-old living with her mum Halley (Bria Vinaite) in one of the rainbow-coloured motels that line the route towards the Magic Kingdom, life is about running wild and creating mischief with her two best friends, Scooty and Jancey (Christopher Rivera & Valeria Cotto). Director Sean Baker introduces us to this ragtag gang at the outset, having pumped up our spirits with a brief burst of ‘Celebration’ by Kool & the Gang, and invites us to indulge in their carefree realm of laughter & innocence for much of the film’s first act; a world where the only consequence to their gleefully unruly behaviour is the possibility of a stern telling-off from the motel’s magnanimous manager, Bobby (Willem Dafoe, his weathered features strikingly amplifying what is a beautifully thoughtful and understated performance).

For Halley, however, the reality is far more desperate. Having lost her job as a local stripper, she’s now struggling to make the rent each week; her only source of income coming from advantageously selling knock-off packs of perfume, with the help of Moonee, to tourists and affluent out-of-towners.

As they proved in the past with Starlet and Tangerine, Baker and his screenwriting partner, Chris Bergoch, thrive in their ability to explore the lives of those who live on the fringes of American society. Halley and Moonee are, like so many families who fell victim to the global financial crisis, part of America’s burgeoning “hidden homeless” community, which grew out of the housing market crash of ’08, and saw many of the country’s budget motels transformed into semi-permanent shelters for those unable to rent; much to the chagrin of the motel owners.

One would argue that The Florida Project isn’t Baker’s most accessible film to date – the narrative’s looseness does occasionally jar – but it is certainly his toughest. Though shot predominately on classic 35mm stock that gloriously accentuates the vibrant, sugary colours that permeate Moonee’s candy-coloured existence, the director – working with cinematographer Alexis Zabe – retains his own reflective vérité style, recalling the work of Truffaut and Loach as he studies the wrenching misery of life lived on or just below the breadline. It’s a dark & devastating film, wrought by the anger of someone who’s furious at the injustices being exposed on camera, but perceptively aware of not wanting to smother his own creative vision. One sequence, in particular, lingers long in memory, as we watch Moonee and her mates explore an abandoned neighbourhood of brightly painted McMansions that remain empty, despite the needs of those displaced families just a little further down the highway who are forced to lodge in rooms barely big enough to swing a cat.

Baker’s decision to focus his film, fundamentally, from the perspective of a young child does show that he hasn’t set out to simply provoke his audience here. Zabe’s camera consciously holds a low angle throughout, so as to engage with Moonee, Scooty & Jancey on a more profound level, and further immerse you in their point of view; in that sense, this is very much of a piece with The 400 Blows, Kes, and also Vittorio De Sica’s Bicycle Thieves. Like those films, the raw emotion of the subject is framed against a backdrop of spirited youthful innocence, with the young ensemble – most notably Brooklynn Prince – bringing an amusingly manic & peppy high-energy that effortlessly enraptures, and crucially leavens the darker inflections of the narrative.

The heart of the film though, is the relationship between Moonee and Halley; a love that we know is destined to fail. Like Prince, Bria Vinaite is a force of nature on the screen: Halley is a character with an almost insurmountable number of shortcomings, but never do we doubt that she loves her child, and some of the film’s warmest moments are borne out of their close-knit chemistry. Indeed it’s this intimacy between mother and daughter that makes their destiny all the more heartbreaking: Baker closing with a gut-punch that he perfectly underscores with the freedom of childhood imagination. Disney may consider itself to be a place where dreams are made, but the truth that surrounds it is closer to a nightmare.