Directed by London Has Fallen writer Christian Gudegas and staring Gerard Butler, Den Of Thieves is the sort of testosterone laden action flick that doesn’t seem to care much about offering anything resembling a coherent storyline, opting instead for a lazily constructed and needlessly meandering narrative, which in the end only succeeds in alienating even […] 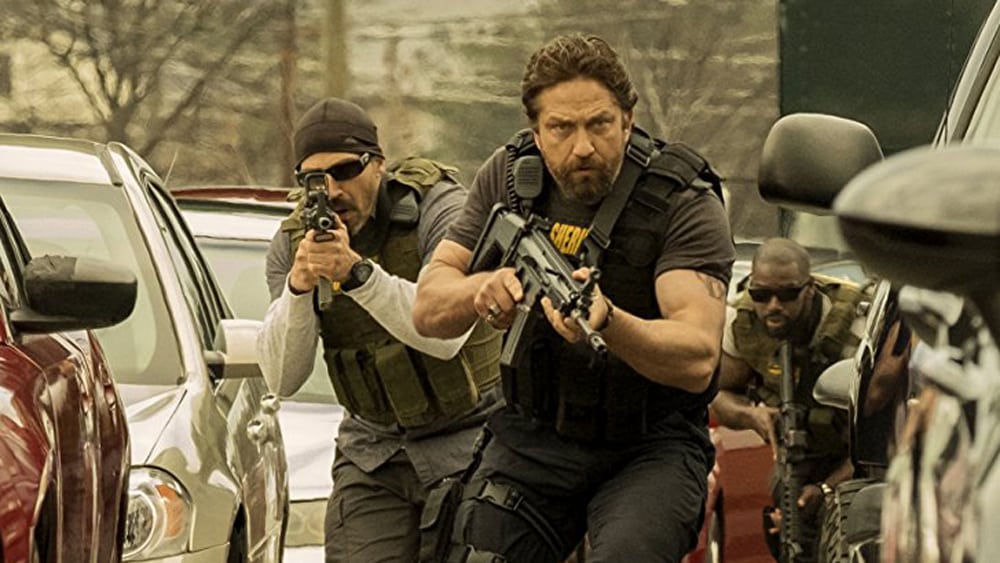 Directed by London Has Fallen writer Christian Gudegas and staring Gerard Butler, Den Of Thieves is the sort of testosterone laden action flick that doesn’t seem to care much about offering anything resembling a coherent storyline, opting instead for a lazily constructed and needlessly meandering narrative, which in the end only succeeds in alienating even the most ardent of action fans. Furthermore, the film falls at the first hurdle by its inability to decide which story it wants to tell, and is consequently let down by an overcrowded script full of characters nobody cares much about or knows why they are there in the first place.

Gerard Butler is ‘Big Nick’ O’Brien, a heavy drinking, tough-talking LA cop who heads up an elite group of County Sheriff Deputies as they attempt to stop a gang of thieves led by Ray Merrimen (Pablo Schreiber) from robbing the Federal Reserve in Los Angeles. After months of arduous planning, Merrimen and his gang are set to pull off the job of the century, however things don’t go quite to plan after a trigger-happy gang member kills a guard in a moment of confusion and mayhem as the robbers attempt to hijack an empty armoured truck. As more police officers arrive at the scene, they too are shot at and killed as the gang makes a swift exit.

To avenge their fallen colleagues, O’Brien and his men single out Donnie Wilson (O’Shea Jackson Jr.), the gang’s gifted getaway driver whom they hope can lead them to Merrimen, and therefore help catch the gang before they can complete the heist. From there on, the story focuses on the bitter rivalry between O’Brien and Merrimen, with the two men sizing each other up as they enter into a deadly pursuit around the city.

So far, so business as usual for Butler et al, but where things take a turn for the bizarre is when you realise that the writers are simply unable to stick to one single strand of story long enough without going down a rabbit hole of boring subplots, and needlessly detailed backstories that only serve in complicating the plot further.

Butler does his usual shtick of aggressive, semi humorous one-liners (think Mel Gibson in Lethal Weapon, only less funny), but sadly even he is unable to save the film from being a complete and utter snoozefest. At 2 hours and 20 minutes, Den Of Thieves could have easily done with losing half an hour of its shamelessly overinflated narrative, packed to the brim with male banter that should have been left in the last century. However the film’s only saving grace comes courtesy of O’Shea Jackson Jr., who steals every single scene he’s in and is ultimately relied upon to bring something resembling a performance to this otherwise forgettable mess of a movie.