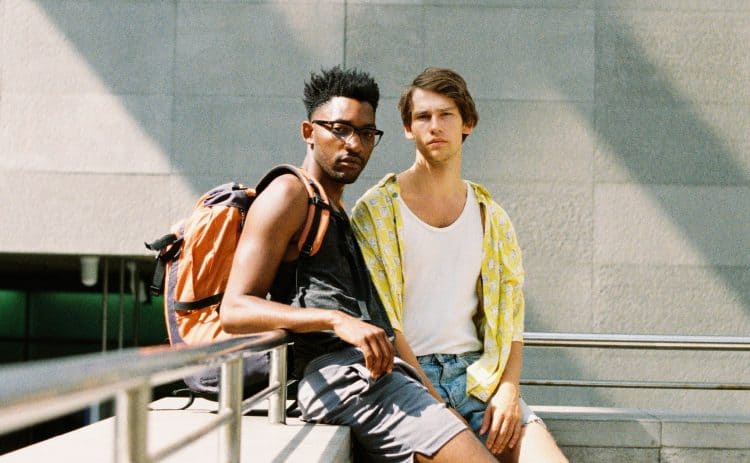 Johannes’ (Alexandros Koutsoulis) and Harry’s (Matthew James Morrison) meet cute is on the dancefloor of a Berlin Club in the early hours. My guess is this after-hours venue is Berghain, a hot-sport for a particular brand of tourist who seek to k-hole themselves away on a city break. As the two lock eyes and inevitably hook-up; Johannes, the local, offers Harry, the British tourist, a personal tour around the city until his Easyjet flight later that evening.

What follows parallels an almost scene-by-scene replica of Richard Linklater’s Before Sunrine, maybe the whole Before trilogy. In the case of Boy Meets Boy it’s a gay hipster version, regrettably a pale imitation of it at that. On their endless stroll, visiting the city’s sights (including Johannes apartment which he shares with his boyfriend), Harry and Johannes reveal themselves through ephemeral exchanges under-laced by nauseating flirtation and generic, under-researched philosophical declarations. They think they are being clever and encyclopedic; for the viewer it proves all too much to bear.

Lopez intentions are perhaps too discernible. In a bid to assemble a depiction of the modern-day gay man (one of which obviously likes football, cause a dose of masculine heteronormative-ness in gay film would go a miss) with all his modern-day conundrums; what is offered here has the adverse effect. No matter how much Harry and Johannes insist of their own individual quirkiness, through their persistent conversations about drug taking, Grindr sex or whether they top or bottom, what emerges is a typical, rehashed, one-dimensional portrait of a gay man.

Boy Meets Boy is out now.