It is only fitting that Takashi Miike should begin his 100th feature film by saturating the screen in a shower of blood. The prolific Japanese director behind Ichi the Killer, Audition, and perhaps most significantly here, 13 Assassins, has always had an ebullient fondness for flooding his frame with gore, and certainly in terms of […] 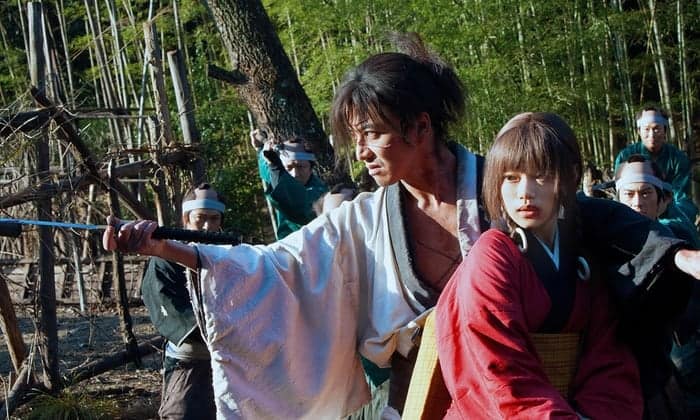 It is only fitting that Takashi Miike should begin his 100th feature film by saturating the screen in a shower of blood. The prolific Japanese director behind Ichi the Killer, Audition, and perhaps most significantly here, 13 Assassins, has always had an ebullient fondness for flooding his frame with gore, and certainly in terms of its devotion to spewed innards, Blades of the Immortal is more than likely to satisfy Miike’s dedicated fan base; this is a film with plenty guts, and I mean that literally.

The cause of much of this bloody carnage is Takuya Kimura’s Shogunate era samurai, Manji, whom we meet during a monochrome-hued prologue attempting to evade capture having murdered a corrupt local lord. It is while he’s on the run that Manji encounters a mystical nun, who empowers him by implanting “sacred bloodworms” into his body that give him the power of immortality. It’s enough to save him when he is later confronted by a horde of rōnin fighters, but not enough to save his sister Machi, who is killed during the ensuing melee.

When we meet Manji 50-years later, he’s a shell of his former self. Haunted by Machi’s death, he now wanders the wilderness as an ageless immortal looking to regain his soul. Salvation soon appears to him in the form of Rin, a young girl who wishes to hire Manji to help her avenge the death of her father, who was murdered by a group of ruthless warriors led by the cruel Anotsu (Sôta Fukushi). Rin bears a striking similarity to Machi – the remarkable Hana Sugisaki plays both – and her arrival offers Manji an opportunity for redemption. To overcome the nun’s curse, however, Manji will have to do more than simply defeat Anotsu.

Adapted capably by Tetsuya Oishi from Hiroaki Samura’s eponymous manga series, it’s a rip-roaring ride, but one that’s grossly overlong. At 2 hours and 20 minutes in length, the story slumps quite significantly during the middle act – the blood-splattered set pieces, and commanding performances of Sugisaki, Kimura, and Fukushi not enough to shield the audience from the film’s monotonously repetitive structure, and regrettably conventional characterisation.

As he proved before with 13 Assassins, Miike has a magnificent eye for action, and the film truly finds it feet during the many extended fight sequences, which combine a comic book sensibility – some of the swords you see swung so effortlessly are of such colossal size that one was left very aware of how lacking I am in upper body strength – with the atmospheric intensity of Akira Kurosawa’s Rashomon & Seven Samurai: DP Nobuyasu Kimura’s focused compositions infusing such scenes with a relentless energy. It may suffer significantly at times from its own indulgence, but it’s impossible not to be entertained by Blades’ gleefully savage style.

The battle of the billionaires: Michael Bloomberg launches US presidential bid