When you think of Brooklyn, images of trendy shops and fashionably dressed residents probably come to mind. Something akin to Noah Baumbach’s Frances Ha or While We’re Young. Yet, in the same area there are groups of people living very different lifestyles. The Orthodox Jewish community depicted in Menashe may live next door, but the […] 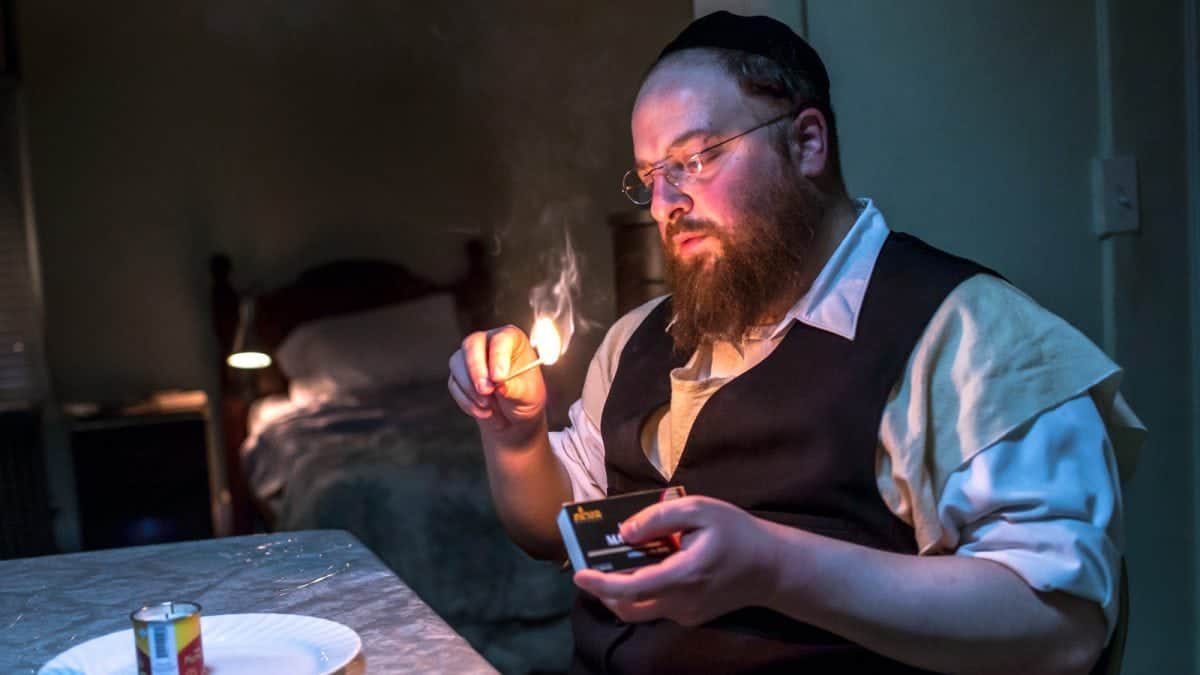 When you think of Brooklyn, images of trendy shops and fashionably dressed residents probably come to mind. Something akin to Noah Baumbach’s Frances Ha or While We’re Young. Yet, in the same area there are groups of people living very different lifestyles. The Orthodox Jewish community depicted in Menashe may live next door, but the way they go about their daily lives is worlds apart.

The film begins with its title character, Menashe (Menashe Lustig), working in a local supermarket. He is very much a flawed personality, and despite his caring nature is often criticised by his boss and extended family members for blunders, poor timekeeping, and a tendency to borrow money. Since his wife died he has been unable to have custody of his son, Rieven (Ruben Niborski), as his Orthodox Jewish faith decrees that children have to be raised in a home with two parents. To mark the anniversary of her death, Menashe plans to host a memorial dinner, and hopes that it will prove that he is able to take responsibility and look after his son.

Central to the story is an internal conflict between Menashe’s desire to regain custody of his son, and his desire to lead a life in line with his Jewish beliefs. Menashe isn’t yet willing to make the necessary compromises, and it is easy to empathise with his situation. Similar conflict is felt by the audience that want Menashe’s son to live with him, but feel uncomfortable about the old-fashioned logic behind him needing to remarry.

As a character, Menashe challenges our sympathies. He can at times be careless and childlike, but moments later can be funny and charming. He can be frustrating because of the way he tries to dodge responsibility while at the same time trying to justify why he should have custody of his son. We may disagree with the ruling, but there are plenty of times when we can see why it is in place. There are signs as the film progresses that he may finally be beginning to mature, but there is still a long way to go before he can prove he is a reliable parent.

There is a sense that director Joshua Z. Weinstein has a real feel and empathy for those he depicts. It would have been easy for Menashe to have come across as judgemental or patronising. Instead the direction is unobtrusive, and the audience is left to decide how it feels about proceedings. The understated nature of the plot reminded me of Ira Sachs’ Love is Strange and Little Men, which have a similarly thoughtful take on the communities that make up Brooklyn.

Some viewers may find it unsatisfying that there is no real emotional catharsis, with only brief moments of emotional release within the story. These are feelings shared with the film’s central character, who is in an almost permanent state of frustration. There are very few outlets or moments when he is able to manage these feelings, and he is often left alone with them.

Menashe may on the surface seem a little unassuming, but behind the simple story is an affecting tale about family and self-improvement. A lot is achieved with seemingly so little.