Drew Goddard’s Bad Times At The El Royale is a gripping Tarantinoesque Nixon era crime caper in which seven strangers find themselves battling it out through a stormy night at a dilapidated, and tastelessly decorated hotel which straddles the California and Nevada border. Written by Goddard himself, the film presents an ambitious and rather inspired […] 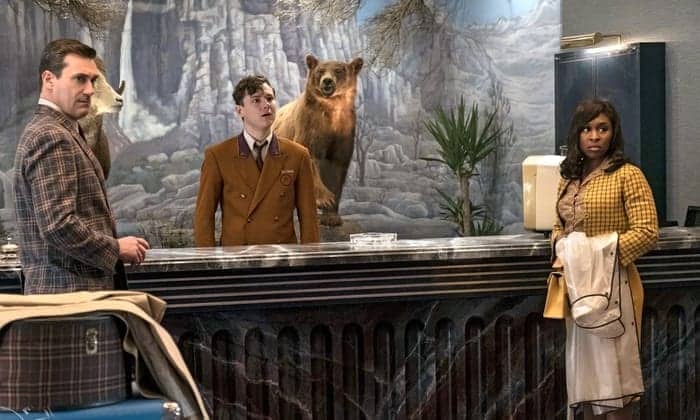 Drew Goddard’s Bad Times At The El Royale is a gripping Tarantinoesque Nixon era crime caper in which seven strangers find themselves battling it out through a stormy night at a dilapidated, and tastelessly decorated hotel which straddles the California and Nevada border. Written by Goddard himself, the film presents an ambitious and rather inspired premise, but is ultimately let down by an aimless plot and a decidedly overlong running time.

Arriving at the El Royale car park on her way to Reno for a one off gig, soul singer Darlene Sweet (Cynthia Erivo) meets an ageing priest who introduces himself to her as Father Daniel Flynn (Jeff Bridges). Making their way inside, both Darlene and the priest are greeted by Laramie Seymour Sullivanan, an obnoxious and overly familiar salesman (Jon Hamm on top smarmy form) who makes it matter-of-factly clear that he wants the best room in hotel and will stop at nothing to get it.

Presiding over the now deserted hotel, is night manger Miles (Lewis Pullman), a young man barely out of his teens who appears to be hiding more skeletons in his closet than the rest of the group put together. It soon transpires that nobody is quite who they say they are, and that the hotel has been operating for years as a way of spying on powerful men who in the past might have used the place for extramarital affairs.

Much like in his 2012 film The Cabin In The Woods, Goddard offers a story in which people are trapped in one place which they can’t leave until all of their issues are resolved. Goddard does a great job in setting the scene and introducing each aspect of his story as clearly as he can, but where things sadly don’t quite add up is in his inability to say “cut” when he needs to the most. Dragging some scenes needlessly to the point of flogging the idea to death, Goddard almost succeeds in bringing something brilliant to the this genre, but in the end he just can’t resist the odd self-indulgence, which will ultimately leave with the feeling that this has gone on for far longer than it needed to.

Overall,  Bad Times is elevated by some brilliant performances, especially from Erivo and Bridges who play two characters who couldn’t be more different if they tried. Elsewhere Chris Hemsworth steps out of his eternal good guy comfort zone to offers a truly remarkable turn as a sociopathic hippy cult leader Billy Lee, while Dakota Johnson is hugely impressive as the ballsy rock chick who kidnaps her younger sister to get her away from him. Also worthy of mention is Xavier Dolan in a scene-stealing turn as music manager Buddy Sunday, in which he manages a respectable and fully convincing English accent.

A respectable effort which in the end fails to fully deliver despite some excellent performances all around.