By Simon Columb  Mean, affected by a tragic condition and with a haunting, arresting gaze, Ava is a memorable tale. Directed by Léa Mysius, this debut can meander and lose a little energy, with plot devices dropped by the way side early on, but it has an intriguing focal point in its lead protagonist who […] 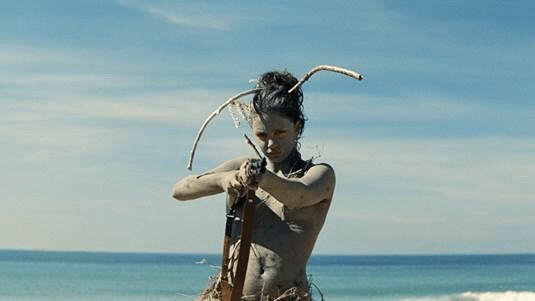 Mean, affected by a tragic condition and with a haunting, arresting gaze, Ava is a memorable tale. Directed by Léa Mysius, this debut can meander and lose a little energy, with plot devices dropped by the way side early on, but it has an intriguing focal point in its lead protagonist who is keen to escape her middle-class, yet lonely life. Ava is also a vulnerable and broken 13-year old girl. Bravely portrayed by newcomer Noée Abita (17-years old at the time of filming, therefore legal in the eyes of France), the role requires nudity and an explicit edge that is necessary for the unconventional and challenging story. Viewers will need to decide whether this complicated depiction is appropriate. As Wendy Ide put it for Screen Daily, these are “queasy questions” for the discerning viewer.

Taking place in a coastal resort, Ava and her mother (Laure Calamy) spend their summer together. Her Mum’s flirtatious behaviour and a young baby sister chip away at their already-scarred relationship. To make matters worse, Ava is slowly losing her sight due to early onset retinitis pigmentosa. In the evening, she struggles the most, while in the sun her sight is better; but, without a doubt, she will eventually be blind. Initially, her mother passionately tells Ava how this will the “best summer ever”, but inevitably, Ava’s heavy burden is soon placed to the side. She is angry with her family and her condition but finds peace in a stolen dog, Lupo. But the owner of the dog, Juan (Juan Cano), takes the dog back and, though five years her senior, Ava falls for him.

Leslie Felperin, for The Hollywood Reporter, described Léa Mysius’ directorial debut, Ava, as “a French cousin to Andrea Arnold’s American Honey“. They share a striking, engaging young lead who rebels against society and falls for a rogue vagabond. Furthermore, Ava’s fractitious relationship with her mother, a memorable moment of dance and a lonely horse call to mind Arnold’s Fish Tank too. Unlike Arnold, Mysius uses diary entries and dream sequences in the first act to establish a personal, yet surreal balance. Sadly, these are not a factor in the Bonnie and Clyde-esque finale.

There is another layer to Ava that, without a little prior knowledge, you may be forgiven for missing. Ava is shot on film and, while the protagonist comes of age with a sight that is slowly disappearing, we know that 35mm is a format that is slipping from our grasp. This multi-layered, confident use of format is a bold choice for a new filmmaker but it proves how adept and perceptive both director and cinematographer, Paul Guilhaume, truly are (Guilhaume also co-wrote the screenplay).

Ava, with a black dog foreshadowing the ever-spiralling, wild life of Ava herself, is an intriguing watch. The cast are accomplished, presenting those on the fringes of society with patient, unassuming sincerity; long, intense stares mean that we feel the intensity between Juan and Ava, for example. The wayfaring plot and extraneous details detract from a clear focus and intention but Léa Mysius, in her assertive and mature direction, will remain one to watch.

Ava is available exclusively on MUBI from 22nd December