In A Quiet Place, actor turned director John Krasinski (The Office, Detroit) transports us into a hellish post-apocalyptic world in which silence has become humanity’s only chance of survival. Written by Krasinski, who also stars alongside Emily Blunt (who is married to Krasinski in real life), the film is a high concept “creature feature” which […] 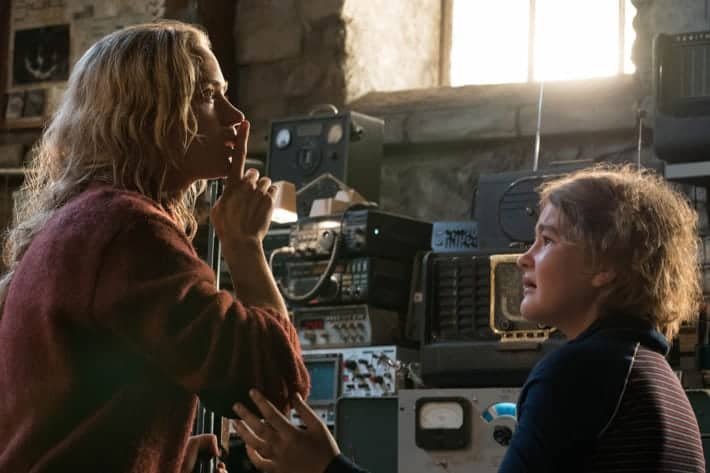 In A Quiet Place, actor turned director John Krasinski (The Office, Detroit) transports us into a hellish post-apocalyptic world in which silence has become humanity’s only chance of survival. Written by Krasinski, who also stars alongside Emily Blunt (who is married to Krasinski in real life), the film is a high concept “creature feature” which pits a family of four against deadly monsters that hunt by sound, and is perhaps one of the scariest and most engaging films of its genre to hit our screens in the last twelve months.

After an undisclosed cataclysmic event, a grieving family headed by heavily pregnant mother Evelyn (Blunt) and tech-savvy dad Lee (Krasinski), must find a way of keeping their son Marcus (Noah Jupe) and daughter Regan (played beautifully by deaf actress Millicent Simmonds) alive at any cost. Having survived until now by isolating themselves in a quiet rural area—they even walk barefoot to avoid attracting unwanted attention—the foursome are still reeling from an earlier loss which has affected the family greatly, and which has left both children and parents deeply distressed and unable to move on.

Krasinski offers a thrilling screenplay held together by some stellar performances and a truly compelling plot which will leave you cowering in your seat from start to finish. Despite best laid plans, things inevitably go pear-shaped and the family’s apparent peace is shattered when the safety of their home is breached by some unwanted visitors. From here on, we are taken into a gut-wrenchingly terrifying experience from which nobody is guaranteed to come out alive.

Emily Blunt gives a genuinely impressive performance as Evelyn. As she goes from ordeal to ordeal, including one particularly excruciating encounter with a nail sticking out of the basement stairs, you cannot help but be affected by everything she goes through, right down to the moment where she tries and almost fails to suppress her screams when it’s time to give birth.

A Quiet Place not only proves that there is a market for well thought-out, intelligent Sci-Fi horror narratives, but it also shows that you don’t need a huge budget to achieve this. Krasinski’s impressive directorial skills cannot be ignored, nor can his remarkable turn as a man who refuses to give up on hope.

On the whole, the film pretty much delivers on its very ambitious promise of pure unadulterated terror from the get go, but remains at it best when it depicts the tender moments shared by its characters. A truly astounding production which is as heavy on scares, as it is impressive on the subtlety in which it treats some of the more hear-breaking elements of the story. A must see.