By Linda Marric First released in 1974, Rainer Werner Fassbinder’s Ali: Fear Eats The Soul has become one of the German filmmaker’s most poignant work to date. This beautifully crafted melodrama deals with themes of love, alienations and racism in post-war Germany. Credited by some as being single-handedly responsible for reviving German cinema after the […] 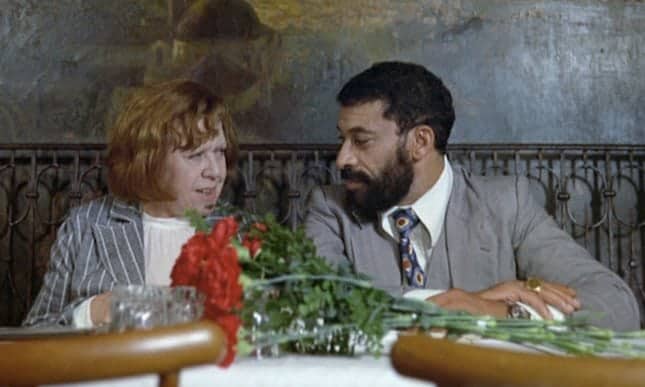 First released in 1974, Rainer Werner Fassbinder’s Ali: Fear Eats The Soul has become one of the German filmmaker’s most poignant work to date. This beautifully crafted melodrama deals with themes of love, alienations and racism in post-war Germany. Credited by some as being single-handedly responsible for reviving German cinema after the war, Fassbinder’s films were part of the New German Cinema movement, and saw him become one of the most influential directors of his time, at home and around the world.

Said to be loosely adapted from Douglas Sirk’s 1954 film All That Heaven Allows, Fear Eats The Soul tells the story of a taboo love affair between a German widow in her 60s and a much younger Moroccan migrant worker. Emmi (Brigitte Mira) first meets car mechanic Ali (El Hedi ben Salem) at a bar popular with Arab workers whilst trying to shelter from the rain. Ali approaches her and asks for a dance and offers to walk her home when she’s ready to leave. Soon the pair form a strong bond and embark on a whirlwind romance, with Ali moving into his lover’s apartment shortly after meeting. Embarrassed by the age gap, Emmi at first tries her best to hide their relationship from prying eyes, including those of her own children, neighbours and work colleagues. Things soon begin to unravel when the lovers find themselves battling against prejudice and preconceived opinions about race and social standing in a country still getting to terms with its dark past.

From the offset, Fassbinder uses his superb mise-en-scene skills to add a sense of isolation of the two lovers. Emmi and Ali are presented to us as a couple completely cut off from the rest of society. They are often framed into tableau-style lingering shots with people looking in from the outside at them, this is used to convey a strong idea of “them against us” from the couple’s point of view. Combined with a deadpan delivery from the cast and an almost jarringly monotonous dialogue, Fassbinder manages to add urgency to the subject matter. He uses melodrama and artifice as a launching pad to convey far more pressing and grittier issues relating to all forms of prejudice.

Ali: Fear Eats The Soul presents its audience with a veritable cornucopia of things to unpack, there are so many layers added to the film with each viewing. And with the recent political development relating to the refugee crisis in Europe, the film will allow a whole new generation of filmgoers to discover a beautifully made social commentary piece about prejudice and the fear of otherness. A timeless classic which gets better with age.

Fear Eats the Soul is in cinemas from Friday March 31st.