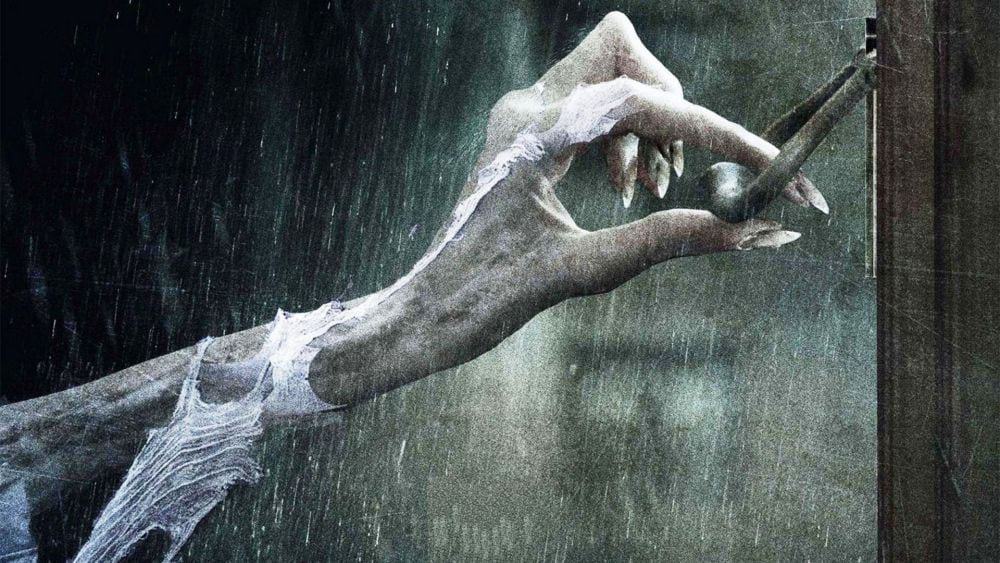 Never mind knocking, you’d be better off giving this uninspired urban chiller from director Caradog James the widest of berths. His 2013 debut feature, The Machine, may have garnered enough critical praise to suggest he was a filmmaker who could talk the talk, but Don’t Knock Twice, his stagnant second film, indicates that he’s yet to acquire the creative confidence needed to walk the walk.

What makes this filmic failure all the more frustrating is that within the narrative is the semblance of a novel idea, with screenwriters Mark Huckerby & Nick Ostler placing their script’s impetus on the fractured relationship shared between Jess (Katee Sackhoff) and her troubled daughter Chloe (Lucy Boynton). Nine years ago, circumstances forced Jess to give her child up, but now, with her life seemingly back on track, she hopes that they can make amends. Fate, however, has other ideas, and soon the pair is faced with the apparition of a vengeful demon, hell-bent on dragging them both into a nightmarish netherworld.

A shady colourscape & shuddering score fleetingly puts us in mind of Takashi Shimizu’s The Grudge, but sadly this is where the similarities end. James’ primary inspiration, it would seem, is genre convention. This is a horror film where creaking floorboards & screeching hinges take precedence over character development, and where dialogue is solely embraced as an expositional tool to try and explain the incomprehensively daft plot. Subtlety & scares both appear to be a riddle that the director isn’t quite able to solve; it isn’t the supernatural spectre that’s unnerving, it’s the fact that, despite a modest 90 minute run time, the only perceptible reaction registered is that of mind-numbing boredom.

To the credit of both Sackhoff & Boynton, their committed performances instil a note of pathos into the few quieter intervals, but it isn’t enough to cast out the overwhelming air of accidie that pervades this picture. The most pertinent moment comes towards the end, when one character fearlessly takes responsibility for this rubbish by echoing the exasperations of the audience and exclaiming loudly, “OH ENOUGH”.

Don’t Knock Twice is in cinemas from Friday March 31st.