As inevitable as getting old and paying taxes, there is another instalment in the Fast and Furious franchise. Seemingly unstoppable, the latest adventure represents the eighth outing in 16 years, with a sense that after years of trying the series had finally hit its groove. The last three films have not just created excitement at […] 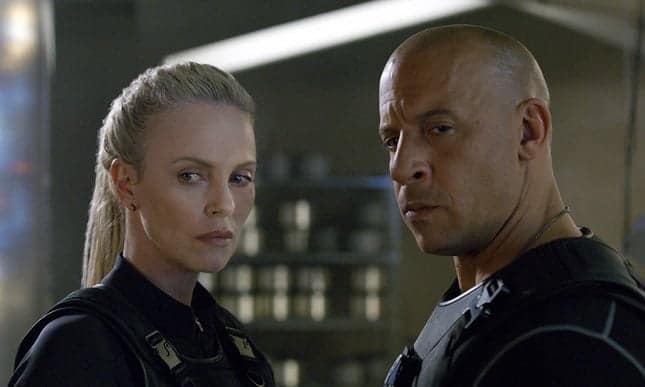 As inevitable as getting old and paying taxes, there is another instalment in the Fast and Furious franchise. Seemingly unstoppable, the latest adventure represents the eighth outing in 16 years, with a sense that after years of trying the series had finally hit its groove. The last three films have not just created excitement at the box office but also garnered some surprisingly good reviews. Impossible as it may have seemed a few years ago, Fast and Furious 8 opens with some pretty high expectations.

The film begins in Cuba, where reformed criminal Dominic Toretto (Vin Diesel) is on honeymoon with his wife Letty Ortiz (Michelle Rodriguez). While there he runs into Cipher (Charlize Theron), a criminal mastermind and cyber-terrorist, who blackmails him into becoming a pawn in her attempt to steal Russia’s nuclear codes and take over the world. As news gets out of Dom’s change of allegiance, special ops leader Frank Petty (Kurt Russell) calls on Luke Hobbs (Dwayne “The Rock” Johnson) and his team, in an attempts to stop World War 3.

The plot in one word is ridiculous, to the extent that you’d be hard pressed to find a 13 year old in the country that could argue otherwise. The sequence where Cipher hacks into the computer of every car in New York and drives them into the Russian convoy wouldn’t even be believable if it was explained by Mark Zuckerberg.

The film, however, knows it’s ludicrous and is willing to embrace it rather than hide behind the kind of faux seriousness that has made The Transformers franchise so unbearable. The actors have been together for over 15 years now and it shows. They are able to play off each other and have a level of chemistry that the latest presenters of Top Gear could only dream of. It’s helped that there are some quite consistent laughs. Watching Dwayne Johnson coach a girls football team shouldn’t be funny but somehow it is and even Jason Statham has a couple funny moments – that’s quite some achievement.

This is not to say that Fast and Furious 8 doesn’t have its flaws but rather that they are made bearable by the film’s genuine affection for its cast and audience. It means that even though it’s too long like far too many blockbusters – here’s looking at you Michael Bay – I wasn’t left praying for the credits.

There are parts though that do become a bit tiresome. The cyber sequences are probably the film’s biggest let down. It is hard to create tension in a battle between computers and it is even harder to create boundaries on what is and is not possible. The hacking powers of Cipher are seemingly so great that there is nothing she cannot do.

The presence of Charlize Theron also reminds us of the exhilarating action sequences from Mad Max: Fury Road and this does make the race scenes in Fast and Furious 8 feel a bit tame and sterile in comparison. There is rarely any sense of peril and I think we all deep down known that no-one will really get hurt.

Fast and Furious 8 might have a preposterous plot but it does have a care and affection for its characters. Their actions may be ridiculous but Dwayne Johnson and co. can be good fun. I’m not usually the biggest fan of large budget action films and even though I’d struggle to argue that Fast and Furious 8 is a good film, I’d also find it hard to see why most people wouldn’t enjoy it.

The Fate of the Furious is on general release from Friday 14th April.