By Stephen Mayne @finalreel As anyone with even a passing knowledge of science knows, you have to test a theory to prove it stands up.Horrible Bosses 2 does just that, stepping determinedly forward to add further weight to the already overwhelming body of evidence suggesting sequels yield diminishing returns. Sean Anders’ follow-up to 2011’s successful […] 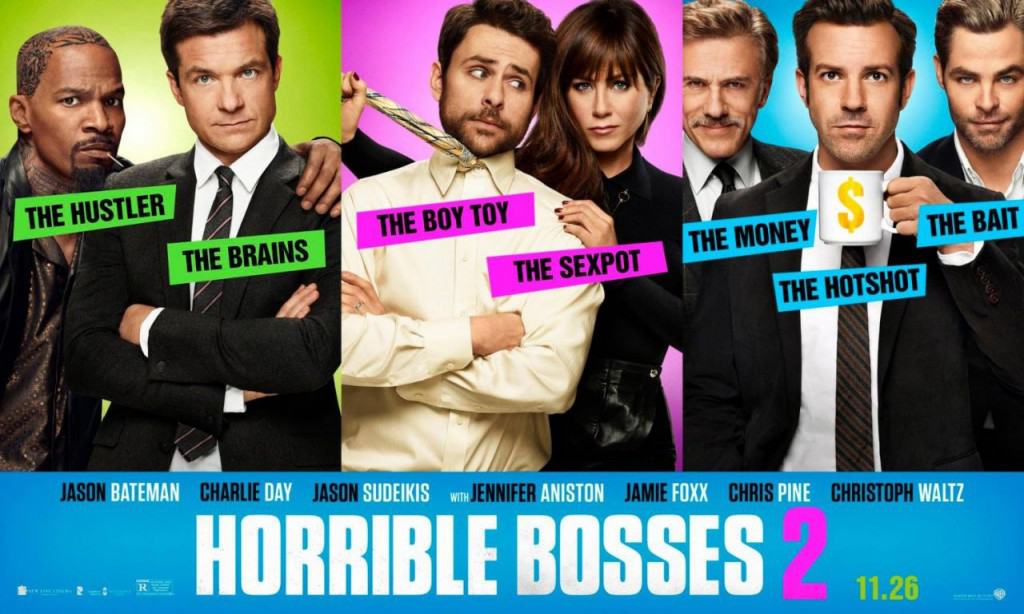 As anyone with even a passing knowledge of science knows, you have to test a theory to prove it stands up.Horrible Bosses 2 does just that, stepping determinedly forward to add further weight to the already overwhelming body of evidence suggesting sequels yield diminishing returns.

Sean Anders’ follow-up to 2011’s successful original is not without funny moments, perhaps inevitably so given the strength of the cast. If only it could let them loose without majoring in cringing sexism and rehashed jokes.

There’s an occasional flirtation with casual racism floating around in Anders’ script, written with John Morris, but it’s the derogatory treatment of women that acts as a lazy touchstone in place of jokes. With three exceptions (one a mother left with the kids, the other two at the casual racism end of the comedy spectrum as a non-English speaking factory worker and a domestic maid), all the women who parade by, and it is a literal parade during a job interview gag, are there purely to be ogled. Even the returning Jennifer Aniston as Julia, one of the horrible bosses from the original, and the only woman to be given more than five words in a row, is there largely in her guise as a crazed sex addict.

It’s disappointing the film sinks to these depths as the leading trio of Jason Bateman, Jason Sudeikis and Charlie Day are funny enough on their own. Reprising their roles as straight laced Nick, womanising Kurt and moron Dale respectively, they have now set up their own business after failing to off their employers in the original outing.

When a business deal with Christoph Waltz’s catalogue sales magnate Bert Hanson turns sour, they switch attempted crimes and plan to kidnap his son Rex (Chris Pine) to save their new enterprise from his clutches.

After an opening third that trades heavily on the more unsavoury elements lurking in the screenplay, Horrible Bosses 2 starts to come into its own. The advancement of the kidnapping plan provides ample opportunity for the incompetent leading men to entertain. There’s a genuine rapport between them as rapid fire dialogue and frantic bickering draws humour from ringtones, car seating arrangements and comedy accents. Don’t be mistaken though; this is still very much a film where comedy accents and stage farce mix-ups are expected to do the comic heavy lifting.

The lack of plot progress and over reliance on Bateman, Sudeikis and Day is exposed regularly as Anders and Morris turn back to the original for source material. Old faces are wheeled out, Aniston joined by Jamie Foxx’s petty criminal Motherfucker Jones and Kevin Spacey’s now imprisoned former horrible boss David to walk through pat routines.

Foxx lurches back into his shifty wannabe gangster mode ripping them off repeatedly with the same useless information, Spacey sneers with relish and Aniston gets to reel off another barrage of sexually explicit comments. There’s even a reckless car chase to close proceedings once more. Aside from changing the nature of the crime the hopelessly incompetent trio attempts to commit, everything is the same. Horrible Bosses 2 is a disappointment, though hardly an unexpected one.

There might be just enough laughs in the playground repartee to carry it through, compromised as it is by laziness and a heavily misogynist streak. Here’s hoping this is the last we see of Nick, Kurt and Dale. It’s about time they took early retirement. thefinalreel.co.uk

Horrible Bosses 2 is on god from Monday March 30th.