For some years now, I have been a frustrated fan of the British actress Andrea Riseborough. She’s clearly a huge talent, but one who always seemed to turn up and be the best thing in movies that were anything from disaster (Madonna’s misbegotten W/E, in which she shone against all odds) to disappointment (Panos Cosmatos’ […] 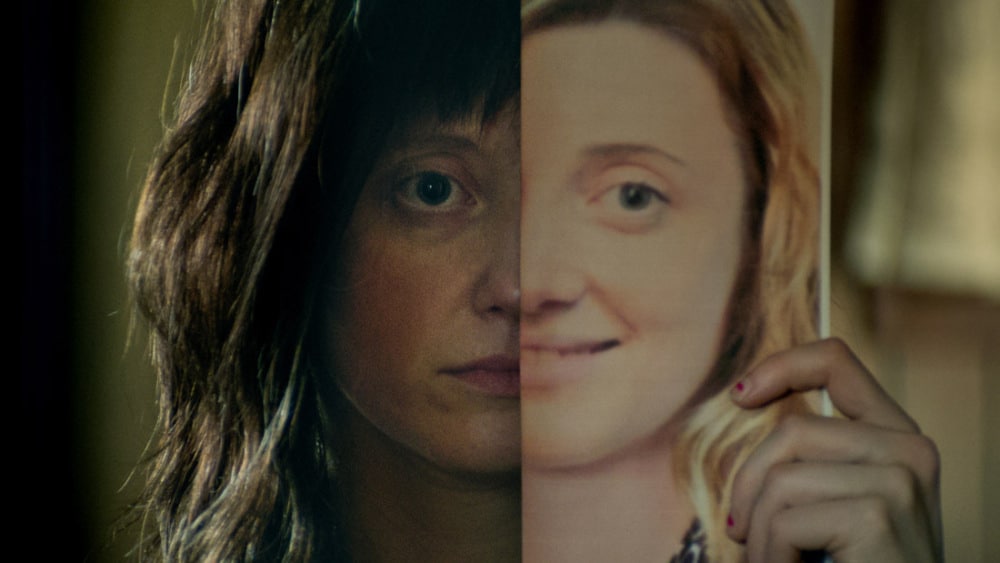 For some years now, I have been a frustrated fan of the British actress Andrea Riseborough. She’s clearly a huge talent, but one who always seemed to turn up and be the best thing in movies that were anything from disaster (Madonna’s misbegotten W/E, in which she shone against all odds) to disappointment (Panos Cosmatos’ Mandy, which underused her, meaning that the film’s revenge narrative never connected with me). Finally, Riseborough has a film that can match her.

Nancy is in her mid 30s, working as a temp and looking after her mother (Ann Dowd), who has Parkinsons. After her mother dies, Nancy sees a news report on the 30th anniversary of the disappearance of a 5 year old girl named Brooke. Seeing an incredible resemblance between her and the artist’s impression of what Brooke would look like at 35, Nancy contacts her parents (J. Smith Cameron and Steve Buscemi), who immediately ask to meet her.

In a confident first feature, writer/director Christina Choe takes her time, setting up Nancy’s character through a first act that could easily have been a whole film of its own. The section of the film involving John Leguizamo’s character, who believes that Nancy is someone else entirely because of a blog she has written, sets up the idea that she is something of a fantasist and that this helps her meet certain emotional needs. This, of course, means that the second section of the film, when she tells Brooke’s parents that she believes herself to be their daughter, and ends up staying at their house as they await the DNA test results, is on an emotional razor’s edge for the viewer. How are we to take what Nancy says? Should we assume that she sincerely believes it, or that she is, whether out of cruelty or her own emotional need, wilfully spinning them a tale? At least on a first viewing, it seems that neither Choe nor Riseborough want to tip their hand.

Riseborough is exceptional as Nancy, giving the kind of quiet, internalised, performance that seldom attracts awards attention but which ends up more revealing and layered for its restraint. Look, for instance, at the scene in which Leo (Buscemi) asks if he can take Nancy’s picture. Riseborough says nothing in this scene, but her discomfort and the variety of tiny expressions that flash across her face enrich all the questions we have about her: is she uncomfortable because she likes Leo and feels bad about manipulating him, is she regressing into a daddy/daughter moment, or does she just not like having her picture taken? Almost every scene has moments like this; a little adjustment that suggests so much behind the character we’re seeing. The supporting cast are also excellent, Leguizamo impresses with a restrained performance as a man impacted by Nancy’s writing who later realises that she was lying about all of it. Buscemi and Cameron have much more time, giving us a sense of the long term grief of not knowing what has happened to their child and the different ways they process the hope Nancy represents. This is where the subtleties of Choe’s writing are telling, listen for when each of Brooke’s parents use “you” rather than “her” when talking to Nancy about memories of Brooke. In many ways, Nancy is Andrea Riseborough’s show, but the central performances play off each other brilliantly, creating an understated tension in the feeling that these three people, each at their own pace and in different ways, are indulging in something that might well be a fantasy that could, at any moment, come crashing down around them.

While Nancy isn’t the showiest film visually, Choe nevertheless finds more than a few haunting images. One is the film’s poster, with Nancy holding the digitally aged image of Brooke up over half her face. It’s an image I keep returning to when thinking about the film, trying to figure out whether Nancy is wondering “is this me?” or “will this work?” in that moment. Easily Choe’s most notable visual flourish is the aspect ratio shift. The first act of the film is shot in the square 4:3 ratio, but once Nancy leaves the home she lived in with her mother, the frame opens up to widescreen. This is, perhaps, the most telling clue as to what Nancy thinks about whether she is really Brooke or not. It could be interpreted as her world opening up, having been restricted, hemmed in by a mother who was actually, unbeknownst to Nancy, her captor. Equally, that same opening up could simply be seen as coming with her mother’s death no longer tying her to the house and to caring for a sick person.

I realise I’ve asked more questions in this review than I have drawn conclusions, but I think that’s one of the best things about Nancy; it invites contemplation and a detailed look at everything from aspect ratio to the intricacies of performance to figure out exactly what is going on, but still spins an involving and moving story on a first viewing.

Nancy is available now on DVD, ITunes and included with Amazon Prime.