Review by Miranda Schiller/@mirandadadada   Enfant terrible of French Cinema, driving force of the Film Noir and Nouvelle Vague movements, Godard is the name you drop when wanting to appear knowledgeable and Europhile. And with good reason. Time to revisit (or discover) some of his most influential films in this newly released Blu Ray box set. […] 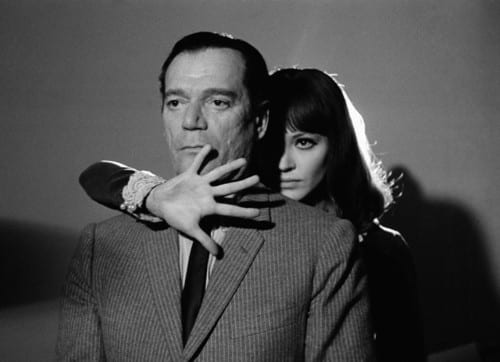 Enfant terrible of French Cinema, driving force of the Film Noir and Nouvelle Vague movements, Godard is the name you drop when wanting to appear knowledgeable and Europhile. And with good reason. Time to revisit (or discover) some of his most influential films in this newly released Blu Ray box set. It certainly gives an indication of Godard’s bandwidth of themes and artistic expressions, from his most well-known, the iconic Breathless, to the gloomy dystopia Alphaville, the deeply political Pierrot Le Fou, the playful Une Femme Est Une Femme and the languorously melancholic Le Mépris. From dark and rainy black and white to bright pop-arty colours in cinemascope, Godard’s films are truly deserving of the term “experimental”. And while he broaches serious themes like the dictatorship of the rational in Alphaville, or the emotional violence of human relationships in just about every feature, and is explicit in his criticism of the Algerian and Vietnam wars, there is also much lightheartedness and yes, fun, to have had with Godard.

Secret Agent Lemmy Caution (Eddie Constantine), complete with trenchcoat, trilby, whiskey and revolver, is sent to Alphaville, where logic rules and emotions are outlawed. Black and white and gloomy, the darkness is only disrupted by numerous neon signs supporting the oppressive organisation of the city. He is on a mission to assassinate Alphaville’s creator, Professor von Braun, but on his way he falls in love with von Braun’s daughter, Natacha (a wonderfully lethargic Anna Karina). Though von Braun has power, the real controller of this society is the giant computer Alpha 60. Its mechanical, raspy voice shares the narrator’s role with Lemmy Caution, and we discover its influence on Alphaville’s society more and more. Every order the engineers carry out (usually resulting in an execution involving a firing squad and a water ballet) is a logical conclusion reached by computation. Godard liberally references Orwell and Huxley, but adds his own, disturbing and chilling aesthetic. Though it is set in the future and/or on another planet, the technology depicted is contemporary, and the locations are all real buildings in Paris, which paradoxically adds to it not seeming dated from today’s perspective.

Angela (Anna Karina), an exotic dancer, wants a baby, her boyfriend Émile (Jean-Claude Brialy) doesn’t, but his friend Alfred (Jean-Paul Belmondo) might. A classic love triangle – but instead of drama, increasingly absurd comedy ensues. Undoubtedly the funniest film of the collection, Une Femme Est Une Femme is not so much a story as a succession of scenes of more and more imaginative fighting and making up, most memorably a silent exchange of insults by means of partly covered book covers. Anna Karina and Jean-Luc Godard had just gotten married at the time, and she would become one of his most important collaborators. As the title suggests, A Woman Is A Woman is ultimately about being a woman, and Karina owns the role spectacularly.

Ferdinand (Jean-Paul Belmondo) leaves his wife and his bourgeois existence to run off with his ex-girlfriend, the life-hungry Marianne (Anna Karina). With her being wanted by Algerian gangsters and having killed a man, they lead a life of crime on the run, involving several super-stylish cars and lots of shooting. Shot in cinemascope and with bright primary colours, it is a celebration of cinema. The tension between Ferdinand (or Pierrot, the unwelcome nickname Marianne gives him) and Marianne serves as fertile ground for strong social and political commentary. He wants to settle down in the almost dreamlike beautiful natural paradise they hide in, with copious amounts of books as his only connection to civilisation, she however gets bored easily and is constantly seeking thrills. They represent two faces of the Western society, both ignoring the glaring injustice and violence in the world around them. Most poignantly illustrated by Ferdinand as he sits through the Vietnam war newsreel in a cinema, obscuring his vision with a theoretical book about poetry. With the allusions to political events of the time and the overt criticism of indifferent intellectualism, this film is perhaps the most rooted in its time and can seem somewhat dated. It is well worth a watch for the cinematography and the performances alone though.

Struggling writer Paul (Michel Piccoli) is hired by film producer Prokosch (Jack Pallance) to write some commercially appealing scenes into the latter’s Odyssey film – the director, none other than Fritz Lang (playing himself) being to artsy for the gloriously arrogant Hollywood tycoon. This new situation leads to a rift in Paul’s relationship with his wife Camille (Brigitte Bardot in all her pouty, barefooted, silk-clad glory). Set in a blindingly sunny Italy, primary colours and oppressive heat dominate the mood, a melancholy intensified by Bardot’s every look and movement, her sheer presence. Her sex symbol status in the film industry is cleverly deconstructed and exploited at the same time, most notably in the opening nude scene in which she begs for the admiration of her various body parts, enumerating them all, ending up creating at least a certain discomfort. This encapsulates the overall attitude of Le Mépris: showing the film industry its own face in the mirror, while simultaneously celebrating cinema, and ending up with a wonderfully evocative film.

Godard’s first feature-length film, and Jean-Paul Belmondo’s breakthrough, this is Godard’s most well-known film to this day. However, his characteristic experimental style is only hinted at, and there is still much more room for an actual plot than in his later works: In this way, it is perhaps his most conventional film. This is not to say that its success is not merited, quite contrary. Belmondo as the young criminal Michel, obsessed with Humphrey Bogart, and Jean Seberg as the short-haired, young American student set the scene in terms of style and mood. The reckless crime plot, the liberal use of jump cuts, the high contrast black and white, the deconstruction of cinematic conventions, it’s all there, the existentialism and the absurdity, hand in hand with the joy and the lightness, the essence of cinema.

The Essential Godard is available from Studiocanal. The BFI is also running a special Jean-Luc Godard season until 16th March.