By Linda Marric They say, never work with children or animals, but in the case of A Dog’s Purpose that old adage can safely be left at the door. Initially marred by controversy relating to a now debunked animal abuse accusation during filming, the film was later exonerated by a third party investigation which found […] 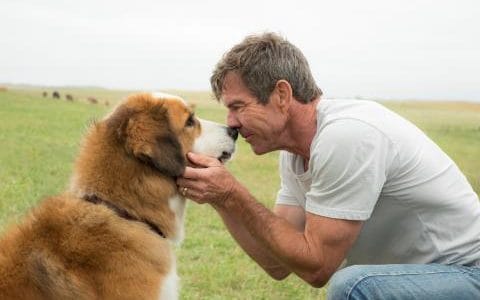 They say, never work with children or animals, but in the case of A Dog’s Purpose that old adage can safely be left at the door. Initially marred by controversy relating to a now debunked animal abuse accusation during filming, the film was later exonerated by a third party investigation which found that there was no foul play. Despite suffering from bad reviews, which one suspects were mostly associated with the scandal, the film is way more interesting and far more touching than anyone would have expected.

Directed by Lasse Hallström (Chocolat) and adapted by Cathryn Michon and W. Bruce Cameron from Cameron’s own 2010 best selling novel, A Dog’s Purpose tells the tale of a dog’s devotion to his best friend and the love that keeps on living even after the dog’s death. As a child Ethan (Bryce Gheisar, later played by K. J. Apa and Dennis Quaid) rescues a cute Golden Retriever puppy from certain death by breaking into an overheating car the pooch is being kept in. After begging for his parents’ permission to keep him, Ethan is later allowed to adopt the puppy which he decides to call Bailey (voiced by Josh Gad). As the years go by, the two become inseparable, but as all good things must come to an end, Bailey one day comes to the natural end of his dog life. However, to his surprise the lucky pooch finds himself reincarnated into a different dog every time his new life ends without ever being able to forget his one and true friend, Ethan.

If you are not a fan of a good old-fashioned weepy, I would stay well clear of this, but if you don’t mind having your heart ripped into a million pieces, then do go ahead. A Dog’s Purpose will not only leave you sobbing uncontrollably, but it will also leave you with a warm and fuzzy feeling inside. Director Lasse Hallström is not only able to manipulate his audience into a sobbing mess, but he also manages to offer a fairly uncomplicated narrative, despite the truly ludicrous subject matter. It’s a well structured, if a little predictable, production which will do more than just move you. The only misgiving I would have against it, is that for a film aimed at a young audience, I am not entirely sure that exposing them to this at such a young age would be a terribly good idea. A truly moving and thoroughly enjoyable watch. Must see.

A Dog’s Purpose is in cinemas from Friday 5th May.