By Linda Marric Now in its third instalment the Despicable Me franchise is well on the way to cementing its reputation as one of the most popular animation series beyond the world of Pixar and Disney. Having regaled children and their parents with two highly enjoyable features, the Minions, Gru and the kids are back […] 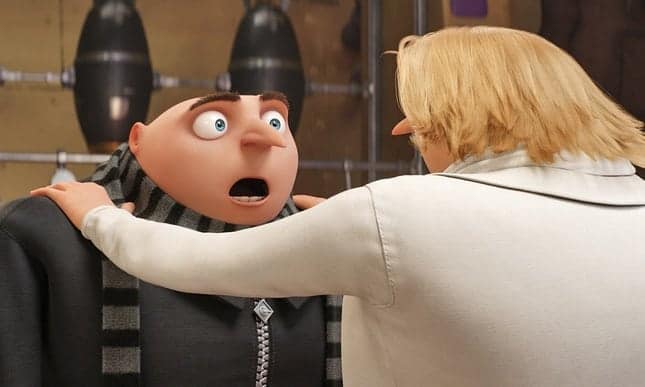 Now in its third instalment the Despicable Me franchise is well on the way to cementing its reputation as one of the most popular animation series beyond the world of Pixar and Disney. Having regaled children and their parents with two highly enjoyable features, the Minions, Gru and the kids are back with Despicable Me 3, or more precisely 3D. The production is as heavy on silly gags and is as action packed as the rest, but sadly has to compete with two highly superior predecessors in the story stakes. However, those who it is primarily aimed at, won’t mind one single bit and will find themselves crying out for more.

Picking up from where we left off in Despicable Me 2, Gru (Steve Carell) is now happily (or as happy as Gru can ever be) married to Lucy (Kristen Wiig) and still in charge of the children he acquired in the first movie. Gru, Lucy and the kids are left dishearten when a secret mission ends in failure and results in 80s throwback Balthazar Bratt (Trey Parker) stealing something valuable and thus resulting in both Gru and Lucy losing their jobs as secret agents. Things get further complicated when the Minions decide to pack up and leave when Gru refuses to go back to his criminal ways. Gru later finds out that he has an obscenely rich twin brother named Dru (also voiced Carell) who is keen to rekindle family ties.

Pierre Coffin and Kyle Balda do more than an adequate job in reuniting their audiences with their favourite characters, but separating the Minions from the main crux of the narrative is deeply misjudged which means that you’ll find yourself wishing they were on screen more often than the rest of the characters. Having said that, the gags are as brilliant as they’ve ever been, and the Minion-speak is a stroke of genius which you’ll never tire from hearing. Elsewhere, there is a brilliantly thought out soundtrack peppered with some of the greatest pop songs of 80s which includes Madonna’s Into The Groove and Michael Jackson Smooth Criminal.

Despite any misgivings, and there are many, Despicable Me 3D does what is expected of it and more. Kids will devour it like they did the first two, and won’t mind too much about the change in pace or the messy script. The 3D is barely noticeable, which makes you wonder why they even bothered in the first place, but on the whole the film is enjoyable, funny and above all stays true to its own ethos.

Despicable Me 3 is in cinemas from Friday 30th June.