When I get through to Skinner’s office, the phone is answered by a gentleman with a hushed voice and a regional dialect that I don’t recognise at first. “Who is it?”, Skinner says. Not quite the start I’d hoped for. I’d read reports he could be quite difficult to interview but he comes across patient, […]

by Adam Turner
in Film, News 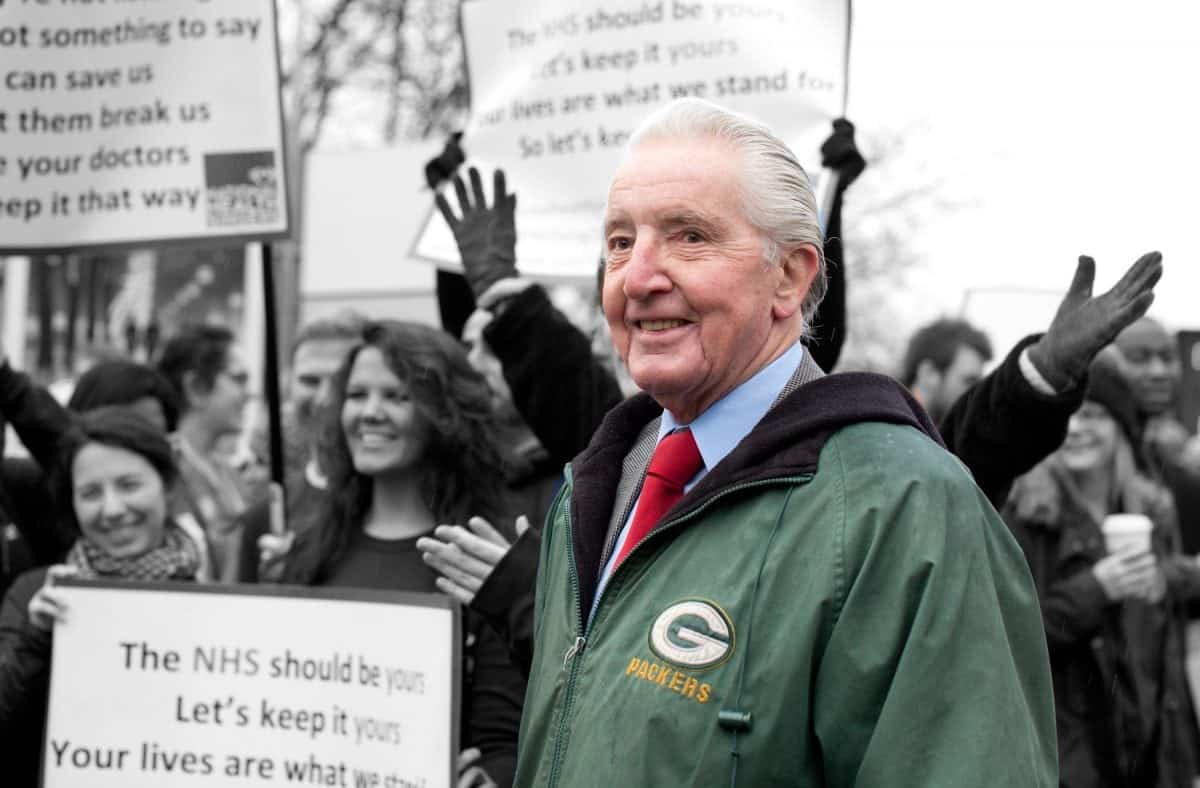 When I get through to Skinner’s office, the phone is answered by a gentleman with a hushed voice and a regional dialect that I don’t recognise at first. “Who is it?”, Skinner says. Not quite the start I’d hoped for.

I’d read reports he could be quite difficult to interview but he comes across patient, polite and affable. Curious to find out how someone had managed to persuade a modest ex-miner to make a film about himself, I ask him how it came about. He tells me the opportunity presented itself after he featured in a short film, made by Draper (the film’s editor), about Robert Tressell’s, ‘The Ragged Trousered Philanthropist’. Impressed by Skinner’s charisma, the Liverpudlian director asked if he would be interested in making a biopic. “I thought it’d be another thing like The Ragged Trousered Philanthropist”, he says.

As it turns out, it was something much bigger: a full-length feature all about him. But where did Skinner’s journey start?

He tells me he followed his father and grandfather down the pits straight from school. Having worked as a miner for 20 years, he became a member of Derbyshire County Council in the 1960s. He proudly recalls how he was also lucky enough to be elected president of Derbyshire miners (made up of 45 pits) at the age of 32 and mentions that his time as a miner is what made him the person he is today.

“I was shaped by the fact that I lived in a mining community where everybody lived cheek by jowl of one another,” says Skinner. His political views were formed from a much younger age (ten or eleven). A youthful Dennis Skinner used to read about the war and ‘everything else’ in the papers he delivered as a schoolboy. “The idea that politics begins in Parliament is nonsense.” He says.

It’s obvious Skinner is proud of his working-class, industrial past and passionate about his mining background as he refers back to those days regularly in every interview I’ve ever read with him. Does he think there a lack of working-class representatives in Parliament?

“There always has been,” insists Skinner. Off the top of his head, he recalls there being around ’40 or 50’ ex-miners in Parliament in the late 50s and 60s. He describes how numbers began to dwindle when he became an MP in 1970 and tells me a lot of current MPs now come from professional backgrounds, like lawyers and political advisers. That’s not to say he agrees with the lack of working-class representation in the Commons.

“I’m staggered there aren’t more working class people in Parliament,” He adds: “When you think, there are a million people who work in the health service, yet there are probably only half a dozen MPs in Parliament, on all sides, that have had experience in the NHS.

I challenge Skinner to explain, taking into account his 47 years of Parliamentary wisdom, what could be done to break down the barriers which prevent working-class people from entering politics to ensure the wider electorate is better represented.

“We have to keep saying, as I’m saying on tape to you, that we need more people who know what it’s like to work for a living,”

He adds: “I don’t expect the Tories, who represent big business, and all the rest, to provide them, but we should have more working-class representatives selected to represent Labour in Parliament.”

I get a strong sense it is a subject close to his heart. What follows is perhaps the most refreshing conversation we have throughout the interview. As we are talking about working-class MPs – or the lack of them – I’m about to bring up Laura Piddock’s powerful maiden speech in the Commons, before Skinner elaborates on his previous point.

“By the way, in relation to this, in the last election, when we did win some very important seats. The truth is, a lot of them [important seats] were won by working-class women. Don’t forget them.”

It is clear Skinner believes female, working-class MPs have an integral part to play in shaping the future of the Labour party, who are yet to have a female leader. “There are more [working-class female MPs], as a result of the election, per head of population, than any other time, no question. So, don’t just assume it must be men. I’m talking about working-class women,” he insists vehemently.

Passion is something Skinner does well. A clip of him tearing into David Cameron, when he is thrown out of the Commons for referring to the then PM as “Dodgy Dave”, has been viewed by almost two million people on YouTube.

Skinner has been kicked out of the Commons more times than you can count on both hands and is renowned for his willingness to go at the Tories all guns blazing. Throughout his career, he has taken on the likes of Margaret Thatcher, George Osbourne, and David Cameron.

Some of his most notable ejections and reasons for them are here:

His rebellious side is part and parcel of his charm and it seems to be working for his local constituents. Skinner has held his seat in Bolsover ever since he was first elected in 1970. His new film gives an insight into why he is so popular, with one local chap claiming even Tories vote for him. The no-nonsense Labour man has also developed somewhat of a cult following online.

Why does he have such a prolific social media following?

“I have no doubt at all that social media has helped, like when they televised Parliament. Suddenly a lot of people said: ‘Oh, I never realised you were witty as well, Dennis?’” Skinner is referring to when television cameras were first allowed to broadcast debates in the Commons, which came about in 1989 following a free vote. He is a man open to change but honest about not fully embracing technology himself.

“I don’t send emails and I’m not a Donald Trump type that tweets every five minutes.” He makes the point of telling me he’s not against it, it’s just not for him. He is aware of an account mimicking him on Twitter called the ‘BolsoverBeast’.

“Some members of Parliament still think it’s me, but it isn’t. It’s someone masquerading as me. But he does taper it to what I might say.” He chuckles down the phone before confessing how he does look at it from time to time.

“I remember on the day the story broke about Cameron, who according to Lord Ashcroft in his book, had had it off with a pig’s head,” chuckles Dennis Skinner, “so, I thought, I wonder what the Bolsover Beast [his parody account] has said about this? I had a look and he said:

At this point, he cracks up. It’s clear from his laughter, he is fond of this particular line.

Has social media helped to spread the message of socialism?

“I’ve got no doubt at all that if we had social media, and cameras with the ability to take photos at the drop of a hat, during the pit strike in 1984, we would have won it,” Skinner insists making an interesting point about the Miners’ Strike of 1984-85 – a high and low point in the battle between unions and Margaret Thatcher’s Tory government determined to break them as they downed tools over pay and pit closures.

With our time ticking away, I’m left with two questions on my notepad. The first is about Skinner’s hopes for the Labour party in the short-term. It’s no surprise to hear he is hoping for another snap election – which he doesn’t think will happen – so Labour can win. “Had it been held a couple of months later [the last general election], I have no doubt we’d be in power.”

There’s no suspicion from me that he doesn’t mean it either. But what I really want to know, is how long he’ll keep going? Skinner is 85-years-old, he is a bladder cancer survivor who has also had a triple heart bypass.

However, it seems the thing which concerns him most – from watching the film and reading his book – is losing his memory, which would make him unable to carry out his job competently. His mother and one of his sisters sadly suffered from dementia.

“I’ve been lucky in being able to retain my memory, to a degree, and therefore it’s all about that“, he says. “It’s not about me or anything like that, it’s about whether the body is capable of doing it,” the Beast of Bolsover adds in a more subdued, serious tone.

“You also have to remember that the Bolsover Constituency Labour Party have got a say on the matter,” I assure Skinner I don’t think he’ll have any problems convincing them he is fit enough to carry on. After all, he’s held the seat for a solid 47 years.

DENNIS SKINNER: NATURE OF THE BEAST is released in UK cinemas from Friday 8th September.