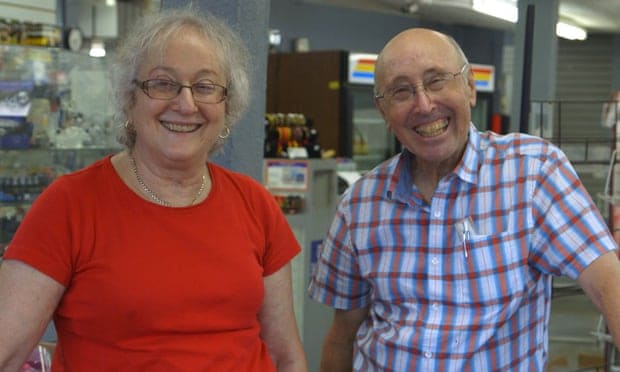 Turning one’s camera on one’s own family has often worked out well for documentary directors. Sarah Polley’s Stories We Tell, Orlando von Einsiedel’s Evelyn, and more recently Kristin Johnson’s Dick Johnson is Dead are all proof that mining one’s own family history (and sometimes the trauma that comes along with it) can be cinematic gold dust. For director Rachel Mason, Circus of Books is an eye opening story all by itself, elevated to an even higher level of filmmaking by her deeply personal connection to the story being told.

The Netflix documentary had its premiere at Tribeca in 2019, where it was met with critical acclaim. In many ways, the film’s story is stranger than fiction. With their bookstore on the verge of collapse, Mason begins to document the final weeks of the beloved store her parents had owned for over 40 years. The store in question – an adult entertainment book and video store, specialising in LGBTQ material. Mason’s parents, Karen and Barry, are not what immediately springs to mind when one conjures the image of the owner of such a specialty store. Karen, a former journalist, and Barry, a former SFX artist in Hollywood, are both middle class, Jewish and in 1976, for lack of a better way to describe it – were completely unassociated with the LGBTQ community. A quick business investment and one large order of gay pornography later, the Mason’s found themselves running one of the most iconic stores in Los Angeles. It’s a match which makes no sense at all, but Mason neatly takes her audience through this bizarre history, along with all the twists which follow.

At its heart, though, Circus of Books is actually about the relatively frustrating relationship between parents and children, highlighted in small asides between Mason and her mother, Karen. The driving force behind the Mason family, Karen is a real character – a no nonsense, business focused woman with seemingly no understanding of why her daughter would want to document their failing business. She says as much to Mason, on camera, which only gives the audience deeper insight as to what it must have been like for the Mason children growing up, whilst defining further the at times fraught mother-daughter bond. Karen is the boss, it’s abundantly clear, which makes the exploration of her reaction to different sexualities (particularly when it comes to her children) incredibly gratifying to watch. These tiny nuances are what makes Circus of Books such an enjoyable film to watch, we come to know Mason’s family as she does, and we care deeply for them.

Circus of Books manages to speak loudly and with precise purpose on huge topics, including the AIDs crisis, the Regan anti-pornography bill, and the intersection of the LGBTQ community and emergence of the internet, through a small family and a tiny bookshop on a street corner in LA. Within her film, there are layers of history which should never be forgotten, and a drive towards a community which (in this new digital age) is beginning to feel fractured. Mason shows us how to craft a film which speaks volumes about these important moments in history and how their effects are still felt, by making her film small and personal. Circus of Books is a whirlwind of a story, and an absolute triumph of a film.