★★☆☆☆ Spanish director Albert Serra’s so-called “anti-thriller” takes place in French Polynesia. In it, the island’s High Commissioner, De Roller (Benoit Magimel), begins to hear rumours about France resuming nuclear testing in the area. He does see signs of movement too; engineers showing up, the navy, but isn’t sure if he’s misinterpreting their presence. The […] 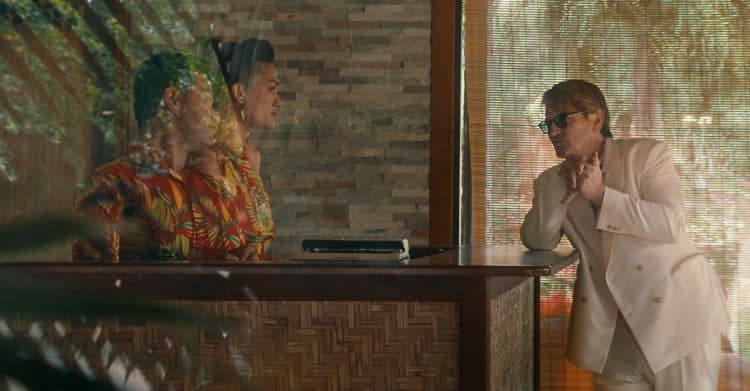 Spanish director Albert Serra’s so-called “anti-thriller” takes place in French Polynesia. In it, the island’s High Commissioner, De Roller (Benoit Magimel), begins to hear rumours about France resuming nuclear testing in the area. He does see signs of movement too; engineers showing up, the navy, but isn’t sure if he’s misinterpreting their presence. The native islanders get antsy and pester De Roller for information. It’s a headache De Roller doesn’t need and he’s sensitive to French Polynesia being a colonial outpost in the 21st century. De Roller wants to keep the native islanders on side.

This slow as molasses movie set in heaven on earth is a big ask. Nothing happens. For 2 hours and 45 minutes. It has no sense of urgency, no sense of storytelling. So it meanders and ambles along like a drunk staggering home after hours, content to be an arthouse chore, content to offer as little as possible, unconcerned if you stay in your seat or whether you run for the exit. There’s a certain admirable quality to film-making that doesn’t care about pleasing the audience, but at the same time, who is this then for? No, señor, there must be something to connect to, to feel, to think about. Otherwise it’s masturbation.

What little characterisation there is centres on De Roller being a man pretty much used to sitting on his backside. When people start making demands of his time, he grows a bit annoyed, his easy-going manner changes to impressing upon various folk his status and rank. But he does commence a cursory investigation into whether or not his homeland is actually restarting controversial nuclear testing.

One of the film’s saving graces, bar Magimel, who is committed to the role and has a certain louche charm, permanently dressed in flowery shirt, linen suit and sunglasses, looking more like a lounge singer than a politician, is the cinematography by Artur Tort. Pacifiction (2022) is duller than brackish water, for sure, but at least it doesn’t trade in romanticised images of Tahiti. Scenes are washed in jaw-dropping peach light, the effect potent and dreamy as hell, in aesthetic terms, and all natural. What a shame then Serra appears not to be at all interested in telling a story with any sense of craft or skill, Pacifiction instead makes sail for nowhere but its own self-regard. This might have been something worthwhile, if directed by a master such as Claude Chabrol, back in the day.