★★★★☆ With the festival over for another year, and the winner of the Palme D’or Bong Joon-ho’s Parasite, I’m bringing some focus to a film I feel was one of the many hidden gems to be found at this year’s festival (with quick shoutouts to My Brother’s Love and the excellent Papicha). While the aforementioned […] 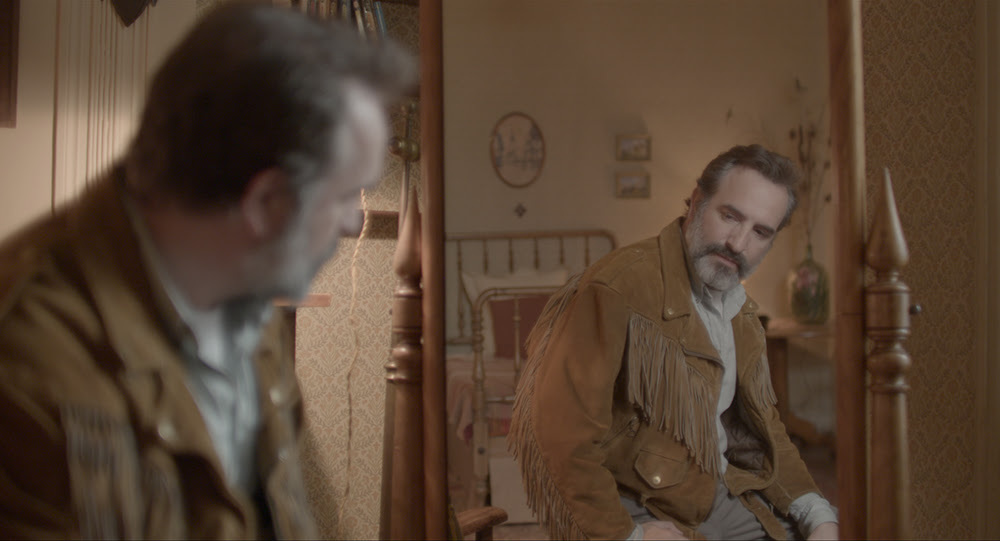 With the festival over for another year, and the winner of the Palme D’or Bong Joon-ho’s Parasite, I’m bringing some focus to a film I feel was one of the many hidden gems to be found at this year’s festival (with quick shoutouts to My Brother’s Love and the excellent Papicha).

While the aforementioned films played in the Un Certain Regard competition, delightfully weird black comedy Deerskin (Le daim) came from the Director’s fortnight and had an audience in uproar.

Georges (Oscar winner Jean Dujardin) is recently divorced and spends his remaining money on a deerskin jacket. He soon becomes infatuated with the jacket, and soon ropes in local bartender Denise (Adele Haenel, who also starred in festival favourite Portrait of a Young Lady on Fire) to make a film about his magnificent obsession.

From Quentin Dupieux, the director of Rubber, you would expect the film to take an absurdist turn, but what could have been an eye-rolling slog turns about to be a biting and witty comment on men in a mid-life crisis. Georges’ love for this jacket soon defies all rationale, and it becomes clear that it is one of the many items that men suddenly adrift in the 21st century suddenly cling to.

Dujardin is an excellent comic performer and perfect casting. Playing off him is Haenel, whose naivete can be both frustrating and entertaining to watch. We have all pushed aside reasoning to follow in someone’s passion, even it may be as illogical as trying to have one deerskin jacket as the only jacket in the world.

The unnamed French town Deerskin takes place in feels like a form of purgatory, with violence unpunished and no-one escaping. This leaves the structure of the film free to explore the escalation of all things deerskin fashion, and also the colossal selfishness necessary for all artistic pursuit. The tone certainly isn’t weighty, with its gallows humour and absurdist violence echoing the work of Wright or Wheatley

Coming in just under eighty minutes the film is slight in some respects, but in a short running time able to pack in swipes at everything from masculine delusions of artistic legitimacy (in a manner far more entertaining than 2017’s Mother!) to people’s passions and how weirdly defensive they can get over them. I had a leather jacket of my own that I wore every day for four years, and I’ll be damned if there wasn’t some desire for it to be the only jacket in the world.