If someone had told me two weeks ago that the best film I would see at this year’s Cannes Film Festival would be a garish, blood-soaked exploitation thriller starring Nic Cage, I probably would have snorted at you with the sort of jeering derision reserved almost exclusively for certain members of the Cannes press corp. […] 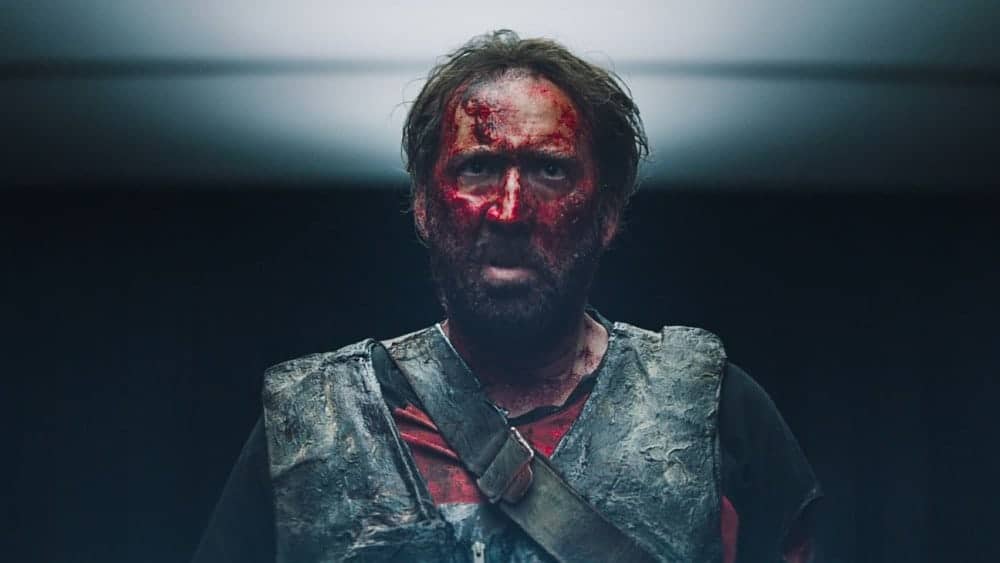 If someone had told me two weeks ago that the best film I would see at this year’s Cannes Film Festival would be a garish, blood-soaked exploitation thriller starring Nic Cage, I probably would have snorted at you with the sort of jeering derision reserved almost exclusively for certain members of the Cannes press corp. And yet, here we are. Directed by Canadian-Italian filmmaker Panos Cosmatos, this blistering rock ballad of a movie is the sort of euphoric cinema experience that deserves to be seen on the biggest screen, with the loudest speakers you can find; a primeval story of revenge forged in fire and brimstone.

Very much a film of two halves, we meet Red Miller (Cage) living an isolated existence with his girlfriend, Mandy (Andrea Riseborough), in the primal wilderness of the Shadow Mountains. It’s secluded, but safe: Red works as a lumberjack, while Mandy is an artist who spends much of her spare time reading pulp fantasy fiction. Then one day, while walking in the woods, Mandy catches the eye of a crazed cult leader, who summons a group of motorcycle-riding demons to capture Mandy so that he may induct her in his religious philosophies.

Cosmatos has clearly been inspired as much by the aesthetic of American grindhouse, as by Italian giallo. The print has a grainy, washed-out and over-exposed quality. The bloody reds and murky blues almost bleeding into one another within the frame, the sonorous tones of Jóhann Jóhannsson’s ear-shattering score – the last one he composed before his premature death – only adding to the film’s searing intensity.

To reveal the specific circumstances surrounding Red’s quest for vengeance would be, in the eyes of this writer, too much of a spoiler, suffice to say that this is the first film where I truly understood the fanatical power of Nic Cage in ‘crazy Cage’ mode. Arming himself with a crossbow that fires arrows so strong that “they cut through bone like a fat kid through cake,” he sets off in pursuit of the “Jesus freaks” that took Mandy.

To call it bloody would be an understatement. The second half of Mandy is a rip-roaring celebration of gore: rusty, jagged, fierce, nasty. At one point Red lights a cigarette off the flame of a head he’s decapitated, at another he kills a man for ruining his favourite t-shirt. Throughout, his face is one of blind, incomprehensible rage, the performance so piercingly unhinged that you find yourself cheering him on throughout – in the screening I attended, there were no less than several rounds of applause throughout the runtime. Consider this the Sistine Chapel of Nic Cage movies.