Review by Leslie Byron Pitt/@Afroilmviewer Despite featuring the ever affable Tom Hanks and adapted from a well-known and enjoyed author, A Hologram for the King (novel by Dave Eggers) received a rather muted reception when realised earlier this year. The film was only really rivalled by Sing Street in the U.K and received a limited […] 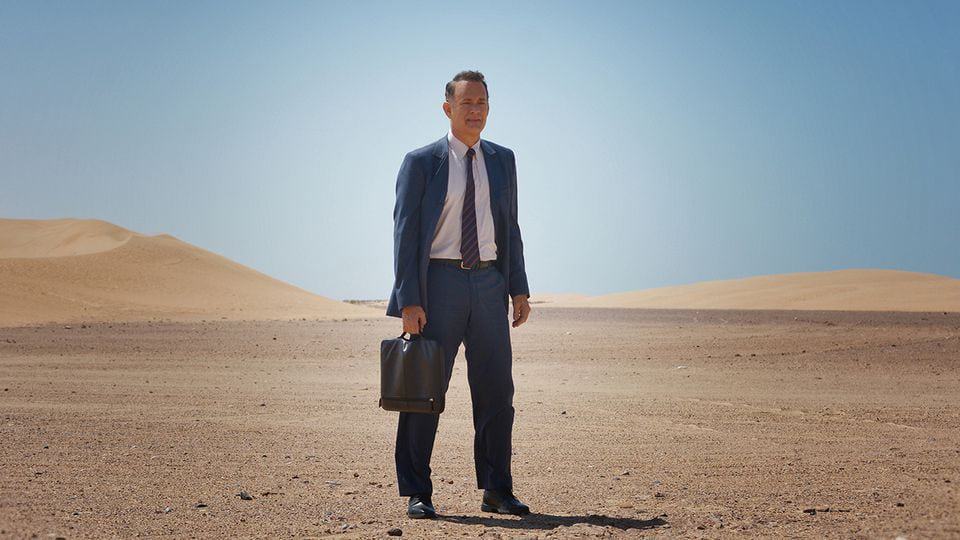 Despite featuring the ever affable Tom Hanks and adapted from a well-known and enjoyed author, A Hologram for the King (novel by Dave Eggers) received a rather muted reception when realised earlier this year. The film was only really rivalled by Sing Street in the U.K and received a limited release in the U.S. Even in his lesser noted films, the appearance of Hanks on the poster has often been enough reassurance to get at least a few butts on seats. His recent output may appear sketchier if placed in comparison to the nineties, his most successful decade. However, A Hologram for the King has become his least attractive proposition since 1986’s Every Time We Say Goodbye, quite a feat for someone who is always so watchable.

Working once more with idiosyncratic filmmaker Tom Tykwer (Cloud Atlas), A Hologram for the King is a feature that falls into that all too familiar sub-genre Middle Aged White American Sad Sack. It’s a sub-genre is often headed up by Bill Murray (Broken Flowers, Lost in Translation) but we’ve seen the likes of Paul Giamatti (American Splendor), Phillip Seymour Hoffman (Synecdoche, New York) and more recently Michael Keaton (Birdman) entered the fray with varying amounts of success. This rather light and breezy conception of our unfortunate bungler has Tom Hanks as a down on his luck Salesman, moving to Saudi-Arabia to escape the pain of his wife leaving him and his picturesque life disappearing in front of him due to globalisation and the outcomes of the great recession. His new job entails selling a brand new hologram system to the Saudi government. Will this down and out man a little more than a grand deal? Could this salesman find a little meaning in his life?

The main issue with this MAWASS feature is despite Hologram being well cast and at times keenly observed, there’s not really that much to it. While understandably a comedy first and foremost (with some chucklesome moments), Hologram holds little drama or drive to the proceedings. The aforementioned films mentioned in the previous paragraph, are more than just a little quirky. They often manage to take on board the eccentricities of their filmmakers and fuse themselves solidly to their often unconventional worlds. A Hologram for the King is too light of touch to remain in the mind for too long. Despite hinting at some of the bold, broad capitalist issues the west has experienced since 2008, the film hasn’t got too much to say about them. It is (only partially) more involved in Hanks interactions with his funky driver (Alexander Black) and his growing relationship with his female Saudi Doctor (Sarita Choudhury).

These relationships are of course key to the film, yet the film only really gets a hold of them later on. Understandably the nature of the film’s culture clash between East and West places a certain (sometimes fascinating) restraint between the always affable Hanks and the poised mannered display by Choudhury. However, the film never really mines the engagement for all its worth. Because of this, what we get a rather pleasant dramedy with a relatively warm central relationship that only seems to spark once we near the end of the film’s running time. Everything is competent, yet nothing seems to last. It’s still hard to imagine A Hologram for the King doing so meekly in terms of audience, yet in the age of mainstream cinematic arrested development, one may consider that the demographic who would usually rally behind such a film were waiting for it on home release. In spite of the film’s shiny gloss, Hologram becomes easier to visualise as a comfy half watch on the sofa. Maybe now the audience will find it a home.

Extras: The disc extras are as weak as it’s the film’s theatrical performance, although the 20-minute making-of is a fizzy piece, which features talking head interviews from every major player.  We are also given a brief behind the scenes gallery.