You wish to hear a tale that’s as old as time itself? How about the saga of a film studio desperate to recapture the magic? We’ve seen Sleeping Beauty from the perspective of the antagonist; had Mowgli’s adventures in the jungle painstakingly retold to us with photo-real clarity; and found ourselves faced with Tim Burton’s […] 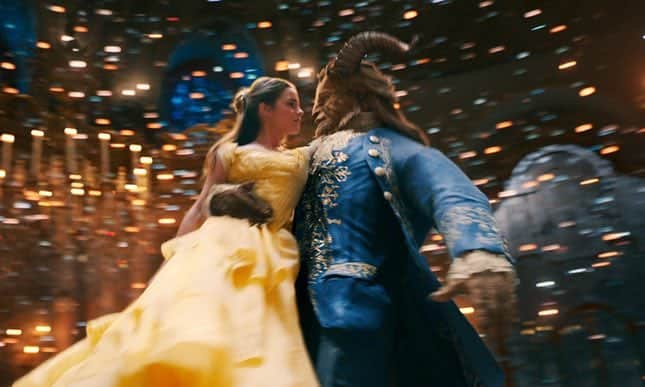 You wish to hear a tale that’s as old as time itself? How about the saga of a film studio desperate to recapture the magic? We’ve seen Sleeping Beauty from the perspective of the antagonist; had Mowgli’s adventures in the jungle painstakingly retold to us with photo-real clarity; and found ourselves faced with Tim Burton’s warped vision of Wonderland… Never mind finding out if an angelic heroine will be strong enough to break the evil spell placed on a conceited prince, the real story here is whether Bill Condon’s Beauty and the Beast will be able to lift the creative curse hanging over Disney’s successively lacklustre run of recent remakes.

Chances are you already know how the plot proceeds, but for those in need of a brief refresher: Belle (Emma Watson) is the bookish beauty stuck living with her father (Kevin Kline) in a poor, provincial French town, where the locals consider her academic thirst to be peculiar. She dreams of adventure in the “great wide somewhere”, yet spends most of her days curbing the constant advances of the arrogant local game hunter, Gaston (Luke Evans, bringing an obnoxious zeal to the screen whenever he’s on it). Destiny has a plan though, and soon Belle finds herself at the mercy of a monstrous looking prince (Dan Stevens), who imprisons her in his castle to live a life of solitude. But, with the help of the palace’s enchanted staff, Belle soon learns that there’s more to the beast than a hostile demeanour & hideous exterior.

Condon takes his cue from Kenneth Branagh’s lavishly coutured retelling of Cinderella, indulging in a sumptuous visual opulence of spellbinding splendour; the castle’s grand interiors designed with a palatial magnificence so rich, they could have come straight from the mind of Louis XIV.

It’s a film that has the air and appearance of a high-camp, high-class pantomime. The songs are among some of the studio’s finest, and Condon, drawing on previous experience and a clear love of Busby Berkeley’s elaborate chorography, handles the musical numbers particularly well – ‘Be Our Guest’ being the obvious showstopper: Ewan McGregor’s joyfully eccentric vocals the perfect accompaniment to a rapturous ballet of whirling crockery that flits, with effortless confidence, between fantasy & fanciful.

As with the cartoon classic, the love that blossoms from Belle’s growing affection for the Beast is rendered with such charm that it’s impossible to not be swept up by their romance. Though his appearance is, for the most part, hidden under layers of CG fur, the chemistry that Dan Stevens shares with Emma Watson shimmers like the light of a full moon on a crystal clear evening; their cherished ballroom waltz enraptures; their duet of ‘Something There’ enchants.

Much has been said by those involved to try and rationalise Disney’s need to revisit a story that has been told so many times before. Watson champions Belle as a feminist role model for young girls, while actor Josh Gad (playing Gaston’s bumbling sidekick, LeFou) has voiced huge pride at playing the studio’s first openly gay character. Sadly, however, efforts made by Condon and his screenwriters, Stephen Chbosky & Evan Spiliotopoulos, to offer the audience something original are more cursory than considered. The “exclusively gay moment” noted by Gad is so frustratingly fleeting that to label it as progressive seems like an overstretch, while Watson, despite her commanding headstrongness, remains bound by Belle’s inherent lack of agency; which, if anything, is more apparent here than in the animated version owing to her accomplished performance. The House of Mouse may declare that this apparently endless series of live-action cover versions has artistic merit, but no matter how entertaining Beauty and the Beast is, it’s a claim that’s starting to feel less like a song as old as rhyme, and more like a broken record.

Beauty and the Beast is in cinemas from Friday 17th March.