By Linda Marric Hope Dickson Leach’s brilliant first feature The Levelling is a fantastically accurate and highly authentic look into the flood-battered West-country regions. This beautifully acted film, not only manages to tell a touching story of despair and isolation in rural England, but also succeeds in making a valid social commentary about those who […] 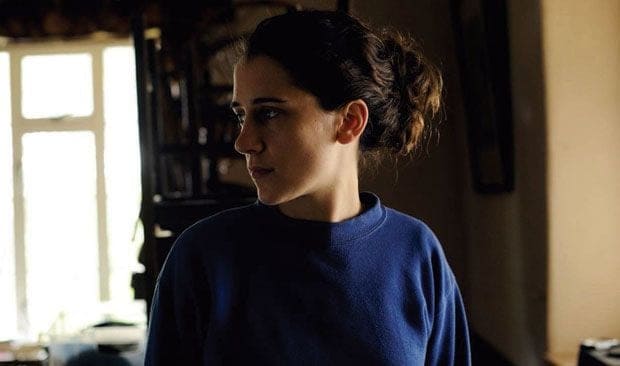 Hope Dickson Leach’s brilliant first feature The Levelling is a fantastically accurate and highly authentic look into the flood-battered West-country regions. This beautifully acted film, not only manages to tell a touching story of despair and isolation in rural England, but also succeeds in making a valid social commentary about those who lost so much in the floods a couple of years ago. Last week I had the chance to meet with both Dickinson Leach and the star of the film Ellie Kendrick (Game Of Thrones, Whisky Galore) for an interview to talk about their experiences working within the confinement of a rural setting on a real working farm, and how they both prepared for the shoot.

To HDL: Your film reminded me a lot of Kelly Richardt’s work with it being based in a rural setting and its stripped down quality, so I was actually amazed to find out that you have a connection with her.

That’s such a honour to be compared to her, Kelly was my teacher at Columbia [university where Hope studied film] so it’s great to hear you say that.

To HDL: What were your influences as a film fan when you were growing up?

My favourite films were Top Gun, E.T, True Romance, Wild At Heart. I was obsessed with Wild At Heart for a very long time. A then, I think I saw Ladybird Ladybird [Ken Loach, 1994], before Kes even, and because I had grown up in Hong Kong I didn’t really know about British cinema, so that film blew my mind. Then I started working for the Edinburgh International Film Festival, and a whole new world of arthouse cinema was opened to me. To EK: Can you tell us how you got cast in this movie?

It was kind of through the conventional route……my agent called me up and said we’ve got an audition for you and it’s for this film called The Levelling, and I thought “fantastic I’ll give it a read” and as soon as I read it, I thought, “great! bring it on! I’d love to do this”. so I had to meet and audition for it…..I remember going to the room and already having a good feeling about it, because I’d read the script and loved it, so as soon as I went into the room it was a room full of women. Obviously, people of all genders can make fantastic films, but I was so excited by the fact that this was headed-up by a crack-team of fantastic women. I think we knew as soon as we met each other that we had fun together and we’d work together.

To HDL: How easy was it for you to transition from working on shorts and TV to feature films?

I mean, it’s what I had always wanted to do…..so I think as nice as it is to make short films, the dream is always to make longer films, because those are the ones you watch and fall in love with. So I’d been trying to do it for a long time and because I write as well, I had been writing feature length scripts and so I’d really started to think in terms of stories that are that long and that complex, so I was really ready, I was gagging to do it. As soon as you get the money in, you start casting you start location-scouting, it’s just a dream, especially if you’ve spent 8 years writing pitches and desperate to get someone to do it, to actually be in the position where you’re actually making the film. I loved it.

To HDL: So how long did it take you from finishing the screenplay to actually being on set?

HDL: Because it was developed though iFeatures [BBC, BFI, Creative Skillset], so I think it was 18 months from when we started the scheme to being on set.

EK: That’s what iFeatures are very great with though, because they fast tracked it, you have to come up with it very quickly.

HDL: And you have to respond very quickly. It’s also so much nicer than going through a development that takes 5 years and they’re still not really sure. So I knew with iFeatures, it was either we get it and we make it, or it would be over very quickly.

To EK: With this film and Whiskey Galore both out in the same month, how are you finding the whole junket circuit?

It always happens that your projects end up coming out at the same time. And I’m not just talking about me, friends of mine who are also actors have the same thing often happen to them. You end up with things coming out at the same time, and they’re two very different projects. Of course you have the opportunity as an actor to hop from job to job, that you don’t get as a director. Because, of course, Hope had to be in the world of this film for a long time….so as an actor you come in for 4 weeks strut around in front of the camera and then you can hop off to another project, whilst for Hope it’s not the end of the journey. I always think it’s funny that so much emphasis is placed on the actors, because they’re often the ones who have the least to do with it. They’ve spent the least time with the film itself.

To HDL: What made you want to base this story in a rural setting?

I think in terms of examining a family who didn’t communicated and a family in crisis, I wanted to put them somewhere where they had the least obvious support mechanisms, somewhere where you could look at them and think they were abandoned, which is not really what it is like in reality. I think that was it, and then while I was developing the story of the family, I saw on the news the Somerset floods, and I saw these pictures and thought, it’s so extraordinary….and I just thought how are these people going cope, not just now with all the drama around them, but in six months time or a year later when the drama goes away? what happens next to these people? And I went down, and luckily was introduced to some of the people, and it just felt like this was a story that needed to be told….and I just learnt more and more about farming through meeting these people. To EK: Can you talk us through what research you did in preparation for the role?

Well there was very practical physical research, so we were filming on a working-farm and it was a working environment that was around us all the time so as an actor that’s a gift, you get to see first hand the things that your character is supposed to be doing. And the farm owners were excellent at incorporating our rag-tag film crew into the daily workings of the farm, and also in welcoming us into their world and even teaching me and David [David Troughton who plays Ellie’s character’s father] how to milk cows, even lending their clothes to us….. the milking overalls were real milking overalls, so it was very hands on. So that was good, and of course I did my research into the flooding. We had the good chance to talk to the community about the problems.

To HDL: Can I ask you about your future projects, do you have anything in particular that you’re working on right now?

Well I’m developing a couple of different projects, one of them is a script that I’m writing which is set in Hong Kong during the Handover in 1997, which makes it particularly interesting especially at the moment with the current world of politics, looking at the end of a nation and how that works, it’s a story about a Scottish woman and a Chinese women who become best friends…and I’ve got some other projects that I’m writing too and you know as with anything you don’t know what’s going to happen next because who knows how long it takes to fund films.

To EK: If you allow me just one question about Game of Thrones. With this being rumoured to be the very last season, how do you feel about saying goodbye to a character you played for 3/4 years now?

I started it on Season 3 and this is Season 7, it’s been a great journey, I mean I don’t know, and I’m genuinely not just saying that like “oohh I don’t know”, I really don’t know if this is the last we see of Game of Thrones, and again this isn’t me saying “oh it might come back again”, I’d be interested to see if this really is the last season, and either way we know it’s going to be an epic season regardless.

The Levelling is on general release from Friday May 12th.