By Linda Marric After the disappointment felt by most on the release of the long awaited Alien Prequel Prometheus, waiting for the next instalment proved to be a nerve-wracking affair. Fans and aficionados of the franchise will spend weeks, months or even years picking the latest instalment apart, but luckily for the casual consumer, all […] 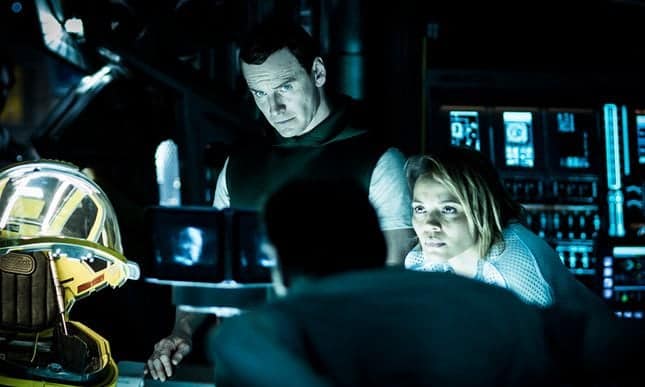 After the disappointment felt by most on the release of the long awaited Alien Prequel Prometheus, waiting for the next instalment proved to be a nerve-wracking affair. Fans and aficionados of the franchise will spend weeks, months or even years picking the latest instalment apart, but luckily for the casual consumer, all you need to know is that Alien: Covenant is a true and decisive return to form by Ridley Scott. Covenant not only makes up for the lukewarm narrative of Prometheus, but goes further into cementing its place within the Alien universe. Scott finally gives the faithful something to sink their teeth into by offering a whole host of references to the rest of the franchise, and the references are subtle and far more fulfilling than in any of the other instalments.

From a screenplay by John Logan and Dante Harper, based on the story by Jack Paglen and Michael Green, Covenant opens with a eerie sequence of Android David (Michael Fassbender)’s origin story, which one suspects is done deliberately to throw the audience off the scent of where the storyline fits within the Alien universe. Scott and the writers do a great job in constructing a thoroughly believable set of events which will later become vital in trying to fill in the gaps. Colony ship Covenant is heading for an earth-like planet with a population made up of couples and families on their way to a new life. When a sudden solar flare puts the ship in jeopardy, the ship’s only waking traveller, an android named Walter (Michael Fassbender) decides to wake the rest of the ship’s crew from hyper-sleep. After a tragedy on board one of the sleeping pods, hapless second-in-command and man of faith Oram (Billy Crudup) sees himself in a position of command which he had until now not anticipated. When they intercept an enigmatic message out on a space walk, the crew decides to veer off from their initial destination and head for a second earth-like planet to find its source.

Scott plays with a tried and tested formula to tell a brilliantly crafted story. Make no mistake, this isn’t just a sci-fi movie – Covenant is as scary if not scarier and more terrifying than the original. Fassbender is utterly brilliant as both androids; seeing him play the two parts with such brilliance and skill is a thing of beauty. Covenant also offers a great alternative to the cliche ridden “space monster” genre, which if we are honest all derive from Scott and Cameron’s original films. With a brilliantly well-judged casting and thoroughly enjoyable action and fight scenes, Alien Covenant surpasses our wildest expectations. At 122 minutes, Covenant might seem a little long, but at no point would you find yourself checking for time, which is a credit not only to the writers, but also to Ridley Scott’s brilliant directing skills. A truly magnificent return to form from all those involved.

Alien Covenant is on general release from Friday 12th May.