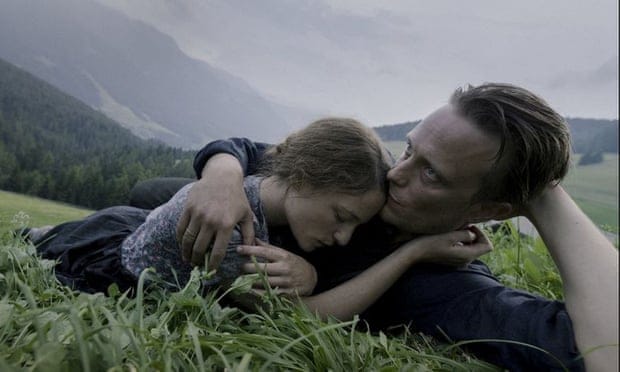 It’s no secret that Terrence Malik tends to divide audiences. Increasingly my consensus is that his work is defined by lengthy, rambling, portentous stories that often make the viewer feel bored and lectured to. The sprawling rumination on family dynamics that was ‘The Tree of Life’ was certainly one of the few films I would have walked out of, if I hadn’t been in the cinema with other people. However, others claim he’s a genius, whose reclusive demeanour and refusal to kowtow to the shortened attention spans of modern audiences is merely at odds with the current zeitgeist.

His latest offering, ‘A Hidden Life,’ stubbornly sticks to this contentious formula. Set in an Austrian village at the outbreak of WW2, it charts the moral dilemma faced by a farmer and his wife as they endure the reality of the ideological fall of their tiny community to the Nazis. Franz, the male lead, initially resists the pressure to join the German army, with his wife standing by him despite their ostracisation by other families in the community, whose sons and husbands have seemingly left for the war with a spring in their step.

The film’s most refreshing aspect is its in-depth depiction of the religious struggle Franz faces, as a devout Catholic feeling the ideology of Nazism is at odds with his beliefs and upbringing. Malik’s Christian beliefs have often been cited as a reason his films feel preachy and sanctimonious, but I found it profoundly moving seeing a director willing to take seriously an individual’s internal moral struggle and everything that inspires it, forcing the viewer to ponder what their own actions would have been in this situation – even if like all Malik’s work, it could have used some serious editing.

The ultimate fate of Franz, languishing in a German-run prison for refusing to enlist while his wife and priest plead for his fate, is genuinely moving, and thankfully avoids any of the usual pornographic portrayals of Nazi violence that we’ve become used to from films about WW2.

Yet at the same time, the lack of any major violence directed towards Franz and the other inmates often means the story lacks bite, with the viewer never quite feeling the stakes are that high.

Furthermore, all the meandering shots of the idyllic valley where his community resides often comes at the price of exploring why the minds of the villagers are so quickly turned to Nazism, when the physical presence of the Third Reich mostly feels very distant. It’s also unclear why Franz feels so potently that he shouldn’t sign up when news of the most extreme Nazi atrocities never seem to permeate the village.

Although ‘A Hidden Life’ is one of Malik’s more engaging offerings in recent years, it still feels, at just short of three hours, like self-indulgence from a film-maker no-one wants to rein in – and for that, we’ve got ‘The Irishman.’ It’s also hard to argue that, with ‘JoJo Rabbit’ hot on its heels, we need yet another film about WW2.

Still, Malik’s fans will be happy.