By Sam Inglis Films menace us in many different ways. We’ve been scared by ghosts, by aliens, by monsters, vampires, zombies, demons and supernatural murderers. I like films with all of these threats in them, but the ones that scare me, that truly get under my skin, are serial killer films. Dracula, Pennywise, The Wolfman, Damien, […] 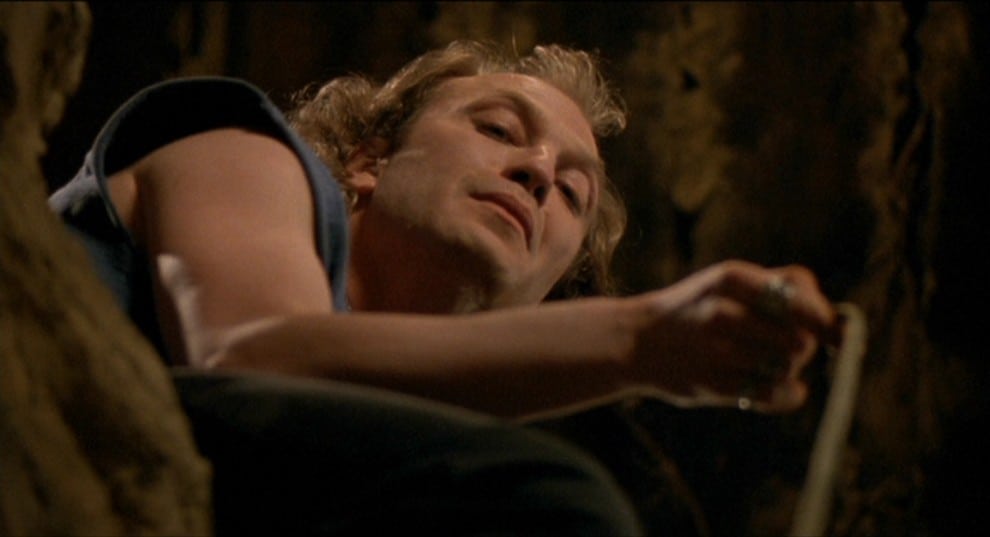 Films menace us in many different ways. We’ve been scared by ghosts, by aliens, by monsters, vampires, zombies, demons and supernatural murderers. I like films with all of these threats in them, but the ones that scare me, that truly get under my skin, are serial killer films.

Dracula, Pennywise, The Wolfman, Damien, Sadako and Freddy Kruger are all very different threats, but they all have one thing in common: you know they’re not real. When you see these threats all you need do to neutralise them is turn off the movie. Serial killers are real and, generally speaking, they look just like anyone else. That’s why they make great movie monsters, and that’s why I’m spinning off the re-release of a restored 4K version of The Silence of the Lambs to talk about some of cinema’s scariest serial killers.

Only given a token release at cinemas and then long forgotten, near lost, The Black Panther is one of Britain’s greatest and certainly its most realistic true crime film. Donald Neilson was a serial burglar who was prepared to kill when his crimes were interrupted, but the crime for which he became notorious was the kidnap and killing of 16 year old heiress Lesley Whittle. The film dramatises, as closely as possible to the established facts, the later stages of Neilson’s series of robberies and murders and the planning and execution of the Whittle kidnapping.

Donald Sumpter paints Neilson as a small and petty man, obsessed with getting his way and with a military level of order in his house (twice in a row he demands that his teenage daughter re-wash a fork he says is dirty). This obsessive nature spills over into Neilson’s planning of his crimes – each is charted on a map, with multiple camps and multiple escape routes. As awful as the scenes of Whittle’s kidnapping are it’s perhaps the moments that he’s kind to her that are most disturbing, the way he softens his voice and pulls on the same mask he tries to maintain with his daughter, purely to maintain control of his victim, which is of course also what he’s doing at home. If Zodiac is the greatest of Police Procedurals the The Black Panther has a solid claim to being the definitive version from a killer’s perspective.

There are some very grim films on this list, but The Young Poisoner’s Handbook, while still dealing in very serious subject matter, is definitely lighter in tone; a pitch black comedy based on the life and crimes of Graham Young, who was obsessed with poisons from a young age.

In 1962, at just 15, he was sent to Broadmoor after his ‘experiments’ poisoned his whole family, likely killing his stepmother, whose remains were cremated and so couldn’t be analysed. In 1971 he was released and soon began obtaining poison again, this time experimenting on his co-workers at the lab where he worked. He eventually killed two of his colleagues.

Hugh O’Connor plays Young as an obsessive man with a boundless – psychotic – curiosity about his chosen field and with a zeal for experimentation and perfecting his process. The film’s black comedy comes both from O’Connor’s voiceover and from the very British reactions to the illnesses that befall the people around him. Hugh O’Connor makes a great impression as Young – intense and unsettling, but in a way that can believably be mistaken for mere awkwardness rather than psychopathy, he’s still working, but this suggests he should have gone on to much more high profile roles, it’s a precisely measured

performance that finds the exact right tone for the film’s dark humour, while not playing down Young’s crimes. This is probably the least well known film on the list this week, and it’s well worth tracking down.

You have to be careful in saying that Henry: Portrait of a Serial Killer and the depictions of Henry and Otis are based on real people and event. It’s certainly true of the people – the characters are based on Henry Lee Lucas and Ottis Toole, but it’s less clear of the events.

Lucas was certainly a serial killer, but it’s likely that many of his claims (he confessed to something like 300 murders) were made to bolster his twisted ego, claiming in death victims he didn’t actually take.

Whatever the truth, Michael Rooker and Tom Towles are both astonishing in Henry. For me, this may well be the greatest serial killer film ever made. It certainly strikes me as the most realistic, the most pitiless and, perhaps more upsetting than anything else, the most hopeless.

Serial killers tend to get caught because their MO identifies their crimes as being connected. Henry deliberately has no MO; he kills by strangling, stabbing, shooting and any number of other methods, we never see single cop in the film, not even incidentally, nor do we get any hint that Henry and Otis are anywhere near being detected.

The most terrifying thing here is the detachment Henry and Otis have from their victims and their crimes, the way they talk about their activities as little more than something to do, a way to alleviate boredom. This detachment is the centrepoint of the film’s most controversial scene (not seen uncut in the UK until 2003), in which we first see Henry and Otis committing a brutal rape murder. Late in the scene, when their victims are dead, McNaughton’s camera pulls back to reveal that what we are seeing is a videotape and Henry and Otis are rewatching and revisiting their crime. When Otis suggests they watch it again we see perhaps cinemas most banal but most revealing insight into a serial killer’s mind.

Buffalo Bill (Ted Levine) in The Silence of the Lambs

Buffalo Bill is the latter, and more an amalgam of characteristics of real killers than based on any single individual. His MO of feigning injury to gain a potential victim’s trust is drawn from Ted Bundy (whose consulting on the Green River killer case also inspired the book as a whole), the skin suit he’s making is inspired by Ed Gein while the pit in his basement, in which he stores his victims, was part of the MO of Gary Heidnick.

When see little of Buffalo Bill in his ‘normal’ persona, though we know from when he takes his victim that he can put on an effective mask, most of what we see of him is the private side, the killer trying to enact his fantasies (the famous Goodbye Horses scene) and growing angry when those fantasies are broken by an uncooperative victim (“It puts the lotion on its skin or else it gets the hose again”). The use of “it” is particularly significant because, as is rightly deduced by the FBI for an appeal video, Bill has to dehumanise his victim in order to kill her, a detail we see in a lot of real cases. Bill may be an amalgam, but the research and Ted Levine’s terrifying performance, enhanced by that tight drawl of a voice, make him a horribly convincing one.

Was Arthur Leigh Allen a serial killer? On balance, I think probably not, but he’s many people’s favourite suspect in the Zodiac investigation and there are plenty of good reasons for that. For me,John Carroll Lynch’s performance in David Fincher’s police procedural masterpiece plays on that ambiguity throughout. We hear a lot about Allen before we finally meet him, particularly in a scene in which Detectives Toschi (Mark Ruffalo) and Armstrong (Anthony Edwards) lay out their case over the phone for the DA in order to get a warrant for Allen.

We finally meet Allen at his workplace. John Carroll Lynch has a softer and friendlier face than the real Allen did, but he embodies his personality perfectly. Lynch plays the part in a chillingly matter of fact way, with Allen never quite outright denying anything and often volunteering informatton that feels incriminating, but finding justifications to brush it away. It’s the quietness with which he plays the part that gets under your skin. Allen is creepy, but you believe that outside of the context we’re seeing him in in this scene he could pass as a totally normal person which, serial killer or not, he clearly wasn’t.

And a bonus choice that doesn’t quite fit

Chad (Aaron Eckhart) in In The Company of Men

Nobody is murdered in Neil LaBute’s first film; a savage satire on the lack of morals at the heart of corporate culture, but would it really be a surprise if they were? The premise is simple. Bored during a long secondment to an office they don’t usually work at, Chad suggests a game to his friend Howard (Matt Malloy): let’s hurt someone. The someone they settle on is Christine (Stacy Edwards), a pretty deaf woman. They decide that they will both date her, try to make her fall for each of them, and then dump her in as hurtful a way as possible.

Like I said, Chad’s not a serial killer, but he’s clearly a sociopath. Emotions are meaningless to him except as levers that he can pull to provoke reactions in others, either to make himself money or to inflict pain on them. It’s clear that Chad relishes causing pain and in a strange way it’s the lack of violence that hits hardest. Violence is a release we often see depicted, in fiction and on the news. Chad’s emotional brutality is much more common, but it’s something we’re less willing to acknowledge, and seeing it so starkly depicted is truly disturbing. I’ve always felt that this character comes across as being one particularly bad day away from becoming any of the characters I’ve listed above.