Bill Hicks was a hugely controversial comedian who died aged 32 in 1994. He was described as the most dangerous comedian in the world, and his love of drink, drugs and smoking was legendary. However, he also tackled serious subjects like religion, politics and personal dilemmas. You wonder what he would make of the state […] 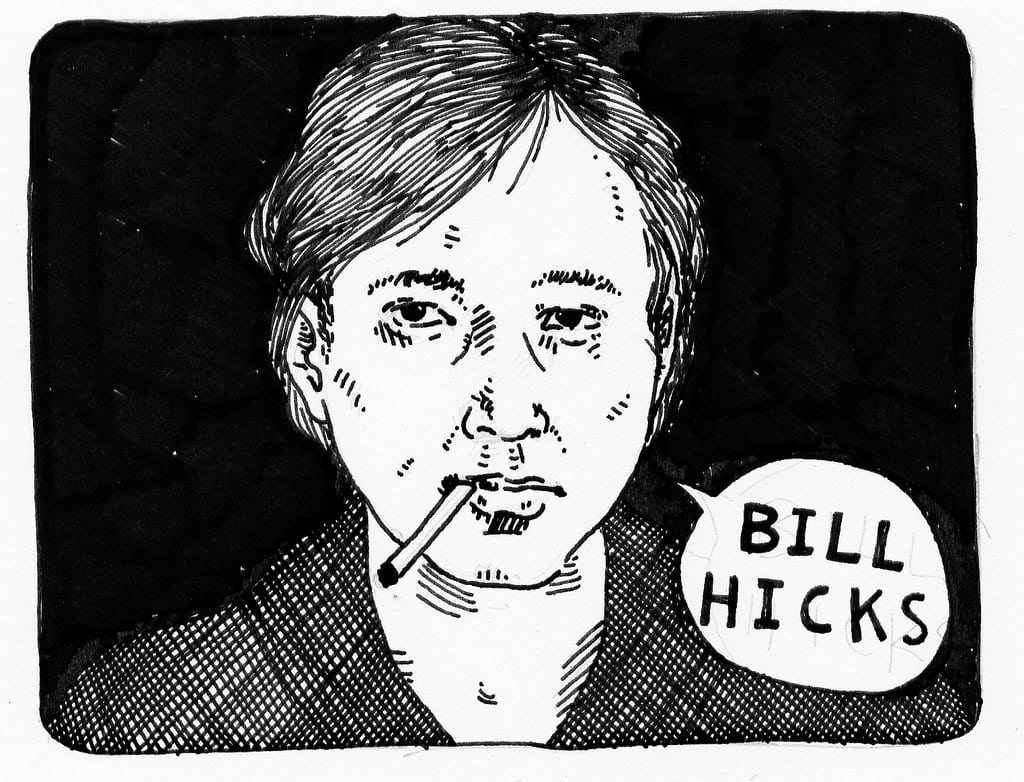 Bill Hicks was a hugely controversial comedian who died aged 32 in 1994. He was described as the most dangerous comedian in the world, and his love of drink, drugs and smoking was legendary.

However, he also tackled serious subjects like religion, politics and personal dilemmas. You wonder what he would make of the state of the world today. I can’t imagine he would be very amused

For your enjoyment here are the best Bill Hicks quotes/jokes.

1.I was in a cab in New York. The cab had a sign, “Please do not smoke, Christ is our unseen guest.” This guy was reaching. I figure, if he could overcome being nailed to a cross, I don’t think a Marlboro Light’s gonna faze him that much.

2. The Evolution Joke, “Folks, it’s time to evolve. That’s why we’re troubled. You know why our institutions are failing us, the church, the state, everything’s failing? It’s because, um – they’re no longer relevant. We’re supposed to keep evolving. Evolution did not end with us growing opposable thumbs. You do know that, right?”

4. On crosses, “A lot of Christians wear crosses around their necks. Do you think when Jesus comes back he ever wants to see a fuckin’ cross? It’s kind of like going up to Jackie Onassis with a rifle pendant on.”

5. On Tv “I can’t watch TV longer than five minutes without praying for nuclear holocaust. Really. On my hands and knees, wishing it upon every one of you. That’s how much I love TV. Think it’s great. I watched “The Love Connection.” That’s gotta be the most depressing show I’ve ever seen in my life. Adult human beings on national television, groveling for dates. Have some self-respect: stay home and jerk off, man. Guys, buy a Hustler, toss off a load, go about your fucking day, all right? Have some dignity.”

6. I need my sleep. I need about eight hours a day, and about ten at night.

8. The Pot Joke, “They lie about marijuana. Tell you pot-smoking makes you unmotivated. Lie! When you’re high, you can do everything you normally do just as well – you just realize that it’s not worth the fucking effort. There is a difference.”

9. On Jay Leno, “Selling Doritos on TV? What a fuckin’ whore. And not even when he needed the money either, you know? If you’re a young actor, I’ll look the other way, but the guy makes $3 million a year, he decides to hock Doritos to make more money. You don’t got enough money you fucking whore? You’ve got to sell snacks to bovine America now? It’s Satan fucking him in the ass on national TV man . . . fuck . . .”

10. The Equality Joke, “I believe that there is an equality to all humanity: We all suck.”

11. You ever notice that everyone who believes in creationism looks really unevolved? Eyes real close together, big furry hands and feet. “I believe God created me in one day.” Yeah, looks like he rushed it.

12.Isn’t humanity neat?’ bullshit. We’re a virus with shoes, okay? That’s all we are.

13.I was over in Australia during Easter, which was really interesting. You know, they celebrate Easter the exact same way we do, commemorating the death and resurrection of Jesus by telling our children that a giant bunny rabbit … left chocolate eggs in the night.

14. I’ve been on what I call my UFO Tour, which means, like UFOs, I too have been appearing in small southern towns in front of a handful of hillbillies lately. I’ve been doubting my own existence.

15. “I can speak for every guy in this room here tonight. Guys, if you could blow yourselves, ladies, you’d be in this room alone right now. Watching an empty stage.”

17. “It’s always funny until someone gets hurt. Then it’s just hilarious.”

18.The Weather Joke, “Today a young man on acid realized that all matter is merely energy condensed to a slow vibration, that we are all one consciousness experiencing itself subjectively, there is no such thing as death, life is only a dream, and we are the imagination of ourselves. Here’s Tom with the Weather!”

19.On Drugs, “If you don’t think drugs have done good things for us, then take all of your records, tapes and CDs and burn them. Cause you know what? The musicians that made all that great music that’s enhanced your lives throughout the years? Real fucking high on drugs. The Beatles were so fuckin’ high they let Ringo sing a few songs.”

20. On reading, “I was in Nashville, Tennesee last year. After the show I went to a Waffle House. I’m not proud of it, I was hungry. And I’m alone, I’m eating and I’m reading a book, right? Waitress walks over to me: ‘Hey, whatcha readin’ for?’ Isn’t that the weirdest fuckin’ question you’ve ever heard? Not what am I reading, but what am I reading FOR? Well, godammit, ya stumped me! Why do I read? Well . . . hmmm . . . I dunno . . . I guess I read for a lot of reasons and the main one is so I don’t end up being a fuckin’ waffle waitress.”