I will call Phil Nichol tomorrow at noon. I was meant to call Phil Nichol today at noon, but I got stuck in a meeting about which shade of green is the best (subjective, no?) and we have to reschedule. Which is fine – he tells me, when we do speak at the following noon […]

by EJ Stedman
in Entertainment 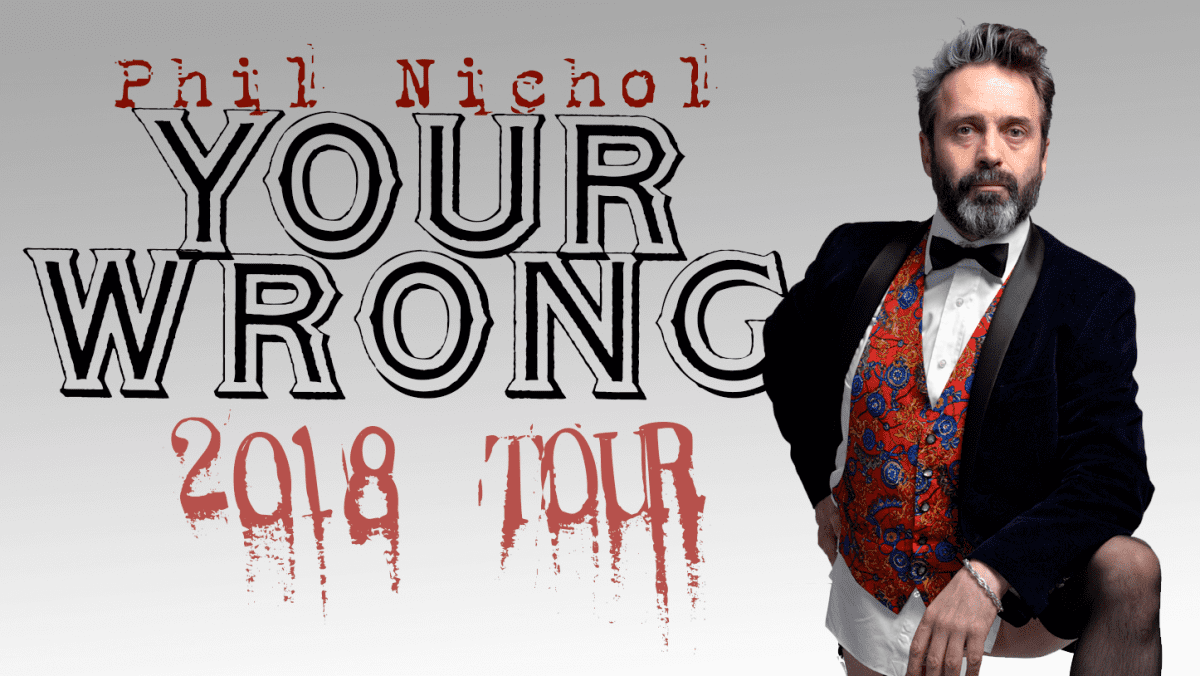 I will call Phil Nichol tomorrow at noon. I was meant to call Phil Nichol today at noon, but I got stuck in a meeting about which shade of green is the best (subjective, no?) and we have to reschedule. Which is fine – he tells me, when we do speak at the following noon – because it gave him the opportunity to go backstage at a play he was in last year. He’s got that, “Everything happens for a reason” vibe to him and if not for religious reasons – he’s ex-devout-born-again-Christian – then in a more fatalistic, make the best of what you’ve got kind of way.

Nichol is a Canadian comedian who has lived in London for the best part of the last 22 years. His latest show “YOUR WRONG!” – yes, it’s spelt like that – has been on tour since the 2017 Edinburgh Fringe and is making its way to the Soho Theatre from 27-1st December. We got knee deep into what reality is, why it’s okay to be wrong, and where to watch comedy in London.

What’s the show about?

Broadly it’s about how I’m wrong about things, and how sometimes we’re all wrong. It’s like an onion peeling back, because there are all sorts of layers to being wrong. I’ve done the right thing and that turned out to be wrong, I’ve made wrong decisions deliberately they turned out really well. Really it’s about certainty and how you can never actually be certain. The beautiful thing about the magic of reality is that nothing is certain.

I guess reality is just light reflecting into our brains

Exactly – I mean I was born into a devout born-again Christian family. I ran away from home at 17 and suddenly discovered rock and roll music and popular culture, and the show is the story of me discovering my rational thinking. The story revolves around my new rational, humanist beliefs. I never tell people what to think – I just express how wrong you can be, and how wrong I was. It’s not a TED Talk; I don’t try and come up with an answer. I couldn’t ever come up with an answer – the reality is we’re just not in control in our lives. When I read conspiracy theories about these massive plots I just have to laugh – whoever they are, they must be pretty smart to be controlling all this.

The minute you plan to do one thing, something else happens. It’s more likely we’re being controlled by aliens. I certainly feel like that sometimes.

Do you feel like the aliens are helping you out, or whether you’ve befallen a lot of luck in the show business industry?

I feel lucky in general in life, I’ve already been born into the top 2% of people in the world. Even if you were born in a council estate in Rugby you’re still doing better than most of the people on the Earth. It’s all perspective. It’s a personal philosophy of mine – you can call it “everything happens for a reason”, but really unless you don’t want to be where you are now, you couldn’t go back and change anything – so I wouldn’t go back and be more or less lucky the second time around. You can see it as hippy stuff, or you can see it from a scientific perspective. Basically you have to be careful with the time machine.

Have a gin and tonic and drink your way through your problems!

It’s the British way! Which places are your favourite to perform in in London?

I do love the Soho Theatre – it’s an alternative hub of comedy and theatre and it’s a great place to perform. I come from a stand-up comedy background so playing the Comedy Store has been something I’ve done for many years. It’s the home of live stand-up comedy and depending on what you like, those venues have really different styles. Downstairs at the King’s Head is a great place to watch comedy. It’s relaxed, it’s under a pub in Crouch End, so let’s give it a shout out too. I also run a new material night called the Delivery Room in the Tap Room Bar on Upper Street every Tuesday. We’ve had Omid Djalili, Reg Hunter, Shappi Khorsandi with their new material. It’s actually getting quite difficult for comedy in London – there’s so much of it. With the advent of things like Live at the Apollo you have a lot of young people saying, “Oh I want to be a stand-up comedian!” and it’s become very competitive.

Yeah! That’s the one. That was really great!

Unless you need a wee, and then it’s the most embarrassing thing you could possibly do [ed: the toilet is at the side of the stage]

I remember performing on that stage and making fun of people going to the toilet. You can’t just ignore them because they’re walking right in front of you. Comedy is about being alive in the room – if someone walks past you, you have to say “Hi!”.