The Jungle’s an urgent political immersive monumental piece of theatre set in an Afghan restaurant deep inside the Calais refugee camp, which was bulldozed to the ground by the French authorities in 2016. It’s a hypnotic play. Part documentary, part fiction, part activist, it gives voice to the stories of the refugees and to the […] 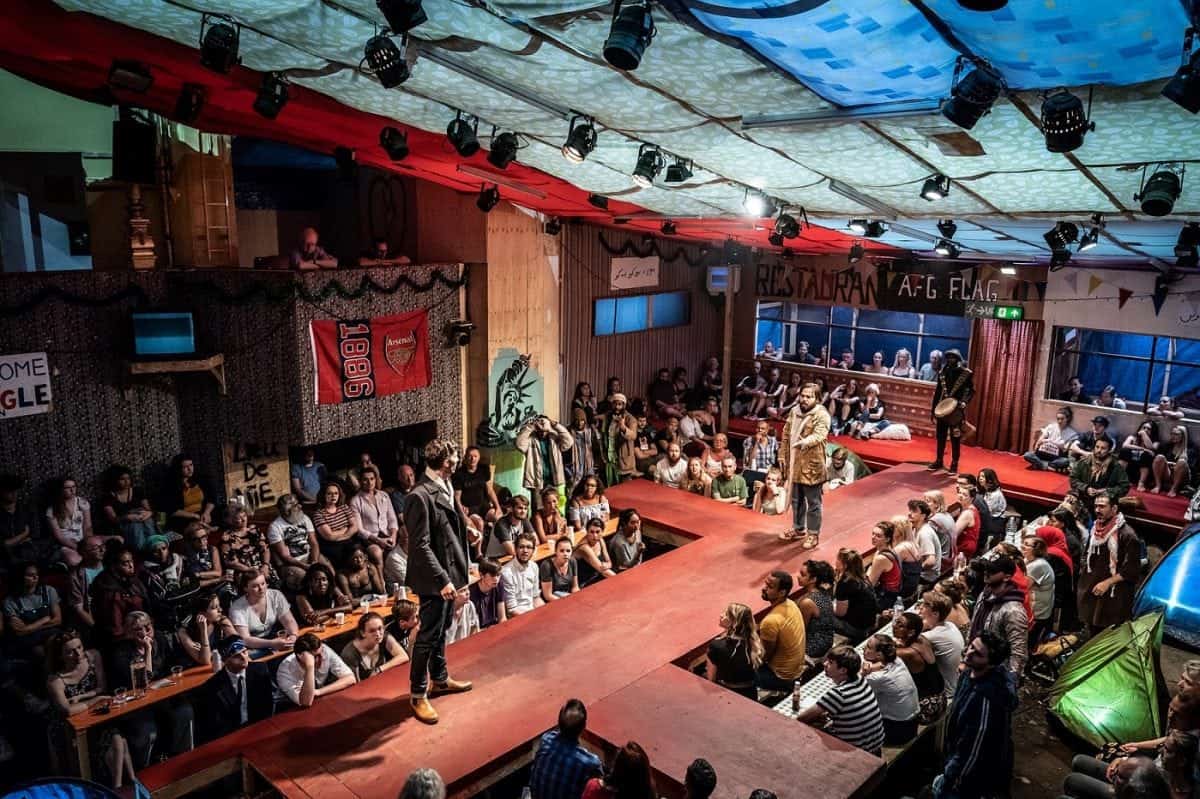 The Jungle’s an urgent political immersive monumental piece of theatre set in an Afghan restaurant deep inside the Calais refugee camp, which was bulldozed to the ground by the French authorities in 2016.

It’s a hypnotic play. Part documentary, part fiction, part activist, it gives voice to the stories of the refugees and to the reflections of the playwrights Joe Robertson and Joe Murphy, who themselves the cracks in the pavement where cultural shifts happen, the “theatre of hope” to provide a safe and creative space for its citizens.

The decision to set most of the audience’s seats around tables in restaurateur/refugee Salar’s eatery (the cracks in the pavement where cultural shifts happen) in Miriam Buether’s wraparound staging, brings theatregoers so close to the actors they cannot separate themselves from the conflicts between refugees and aid workers, the at times aggressive community meetings where they plot to thwart the authority’s violent campaigns, their hagglings with people smugglers and cultural trials living side by side, stuffed up against each other like sardines.

Not getting any easier on repeated viewings, perhaps the hardest moment in the play is when the body of six-year-old Alan Kurdi lying face down on a beach near the Turkish resort of Bodrum, is displayed unannounced on screens dotted around the auditorium. Nobody moves-instead there’s a sharp audible intake of breath and an arrested moment of collective pain and compassion. And perhaps anger.

Simple political points are made thereafter. A lot of them are aimed at Theresa May, the then reform promising Home Secretary who was already signalling the UK’s exit from the EU with her cavalier attitude towards refugees and refusal to sign up to any key EU resettlement or relocation plan-but this only serves to reiterate the point that politics is actually quite simple when it comes deciding whether a country should give refuge to men, women and children fleeing torture and/or certain death.

As Safi, the quiet, spiritual and intellectual leader of the camp, takes Little Amal (Lara Alpay) the only unaccompanied child in the play by the shoulders and quietly asks “How would you feel if this was your child Theresa May?” one realises theatre can’t get any more direct, personal or political. No.10 is but a stone’s throw away. Some MPs really believe that art can’t incite activism or change, but if only Theresa May would come and see this-maybe she might be persuaded to change her mind and her policies a little.

Murphy and Robertson give us a clear overview of The Jungle’s genesis and eventual demise, offer intriguing thoughts on how the temporary becomes very quickly the accepted permanent, how cities evolve and what they mean to people and explore what we humans, for all our civility and intellectualism, will allow to happen to others as we stand by watching, seemingly indifferent. As one character puts it, the camp is right by a “main motorway, in full view of the motorists”.

It’s a simple and brutally honest fact. The play asks us to consider the momentousness of this whole continuing human catastrophe and the world’s outrageously mostly hostile response to the plight of refugees, so that we should understand that you and I are allowing people to live in undeniably awful conditions and die before hope has had time to prove itself.

Yet this is by no means a play which sells itself on moral righteousness. It is a festive celebration of hope, music, food and football. It’s as entertaining as any West End show. Murphy and Robertson are also clever-along with an extremely committed and dedicated cast directed by Stephen Daldry and Justin Martin-they concoct a medley of characters who are just as flawed and as dysfunctional as you and I. Each UK aid worker, from Dominic Rowan’s passionate yet blustery but well-meaning Derek from Islington to Rachel Redford’s determined and down to earth student teacher Beth, Alex Lawther’s precocious Sam (who perhaps goes on one of the bigger emotional journeys) Trevor Fox’s permanently drunk carpenter from Newcastle (who comments that everyone is a refugee) to Jo McInnes’ Paula-successfully dissects the stereotype of the good samaritan do-gooder volunteer and finds it wanting and in need of a healthy makeover. The night though belongs to the refugees-some of whom are on stage-and their stories. John Pfumofena turns in a heated and desperate performance as Okot and his enemy turned friend Norullah, in a hurry to get to the UK, is played engagingly by Mohammad Amiri. Ben Turner as Salar and Ammar Haj Ahmad as Safi give complex unexpected portraits of men whose moral and ethical beliefs are challenged and tested at every turn. The dedication of the whole of this cast is to be applauded-the impact would be far less if one sensed that not everyone was as authentically committed.

The Jungle is also unique because this show is not in an eclectic indie theatre downtown or in a warehouse on the edge of an industrial estate as you might expect but in the heart of the commercial West End and palatial Westminster. The tarpaulin like simple flat roof of the restaurant pushes up angrily against the Franco-Venetian style fittings of the Playhouse Theatre,the cracks in the pavement where cultural shifts happen .

No one should underestimate the importance of this precarious venture and what it signals-which is that British Theatre has to, must, undergo a gear change and respond to “the cracks in the pavement where cultural shifts happen”. This play is a call out and a provocation to our theatre makers, not just to the citizens of the UK and its lawmakers. What this might mean for West End commercial theatre in the future, no one can tell, but The Jungle’s arrival begs the question-where next? Surely The Jungle has to travel the country and be seen north, south, east and west?

There are other battlegrounds to conquer too.

The physical camp in Calais may be gone, now grown over by patches of rapeseed but the children especially are still there, going missing when The Jungle was erased. What’s left is the haunting legacy of how our leaders and the media used the Paris terrorist attacks to put further pressure on The Jungle. What’s left is the haunting legacy of how countries treat children who are refugees, not just adults. What’s left is shame over how this government has treated the Windrush Generation and separated thousands of refugee families. This legacy of neglect, duty and indifference has extended its ghastly hand across the Atlantic to Trump’s zero-tolerance policy towards migrant children in the US and gives permission for other countries to commit further crimes against humanity. What we are starting to accept from our leaders would have been unthinkable maybe even just a decade ago. Seeing this play one can’t help thinking that the whole of humanity, not just the UK or the EU, is at a cross roads. And how a civilisation treats its own children is a reflection of itself and its inner life and spiritual health. This play is a very real warning about what could happen if we don’t look after those coming after us. Are we going to heed it?