Rory Mullarkey’s boundless satirical investigation into the nature of storytelling and role play is a reflection of the chaotic times we live in and a measure of the changing ways in which we use narrative and personal myth-making to navigate the modern world. Mullarkey’s writing has an ironic bite through its “what if” game like […] 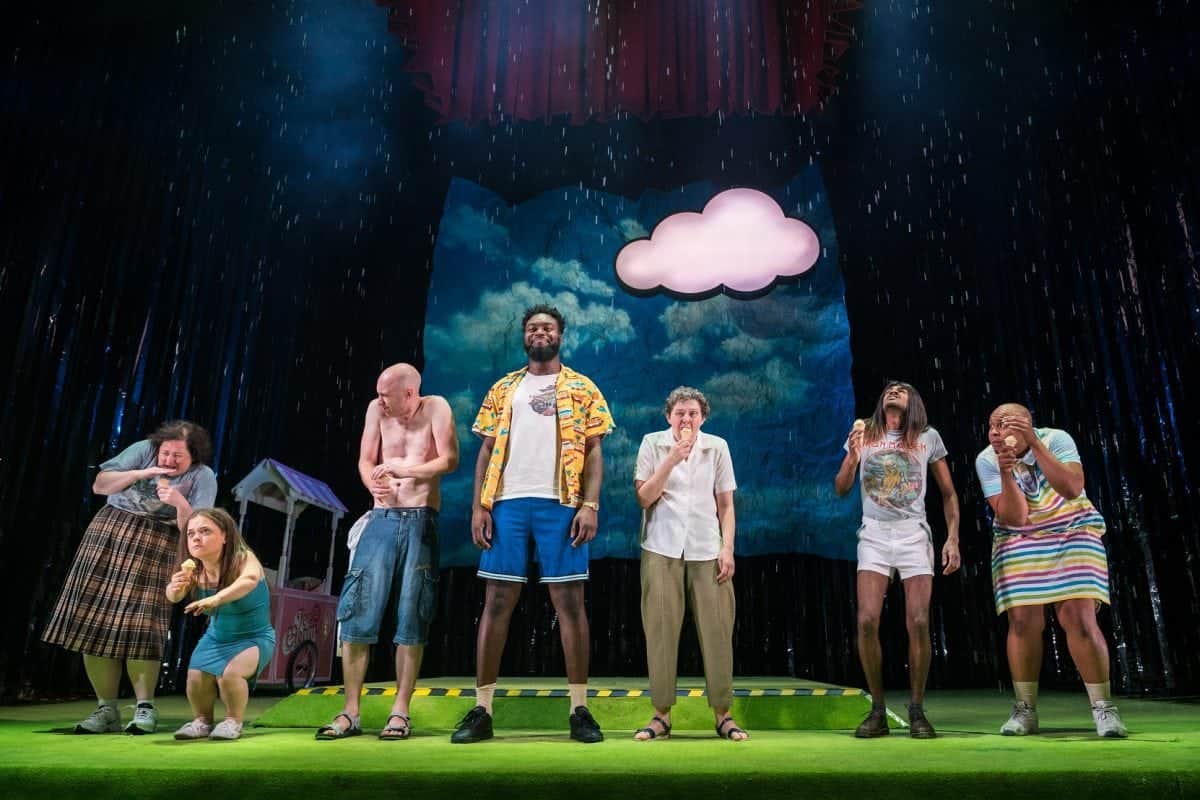 Rory Mullarkey’s boundless satirical investigation into the nature of storytelling and role play is a reflection of the chaotic times we live in and a measure of the changing ways in which we use narrative and personal myth-making to navigate the modern world.

Mullarkey’s writing has an ironic bite through its “what if” game like scenario, equally met by director Sam Pritchard’s inventive and playful directing. Sasha Milavic Davies’ movement direction also takes it to another level entirely.

Repetition and surprise events which no longer seem surprising are the order of the day. “I’m alright” is laconically muttered rhetorically by characters several times as tragedy upon tragedy mutates into slapstick farce. We begin to think that words lose meaning, lose their beauty. People role play, construct power narratives with little truth behind them and parade themselves both individually and in a collective as if to say,“look at me, look at us” (for no particular reason) And we do.

The writing is both brilliant and a constant send-up of itself. There’s something of Caryl Churchill’s Escaped Alone about Abraham Popoola’s jobless and moneyless “Person” the narrator of this vast, game like messy parable as he introduces us to a small town square in a small town with only one department store somewhere in the United Kingdom. The evocation does not diminish with a live brass band (from Fulham) or the introduction into the Person’s fellow ragtag, boisterous citizens exhibiting themselves in several parading tableaus.

Bit by bit, they lose their homogeneousness to reveal sometimes terrifyingly spiteful individuals who never-the-less have the audience splitting their sides (Francesca Mills in particular). It’s like Roy Andersson meets David Lynch meets the Canterbury Tales meets the at first hard to watch but then hypnotic Arrested Development like avant-garde drama series on Netflix.

But just when you think you’ve got the hang of the whole thing, Mullarkey, Pritchard and crew blow it up (there’s a lot of explosions). Tragedy in the form of a kind of terrorist plot strikes just as Person meets Daughter (Sophia Di Martino) who, whilst not exactly the love of his life, will become someone he can love. After this we get a multitude of events and happenings in the form of parading refugees “from just down the road” trailing after the Mayor as if he was a pied piper (it would be even funnier if it weren’t so true) tank crashing dictators and repetitive battle scenes as town and country turns in on itself.

There’s even a skit from a female Prime Minister (a very funny Helena Lymberry) who can only snap out of her indifferent confusion over the town’s tragedy when she has the chance to sing ecstatically about a sandwich. It all sounds a lot of fun and Mullarkey + co are certainly good at making mischief, but it’s also an at times despairing portrait of a bleak Britain on the brink of Brexit (it is not mentioned) struggling to effectively oppose the rise of right-wing groups and the mentality that anyone can be anyone, especially if they have the money. And such terror happens that humanity appears to lapse from the relatively moral dog eat dog shop assistants who role play in order to try and assert authority or the illusion of it over each other, to groups of warlord worshipping vagabonds who blindly follow orders without questions in order to survive. Only the short scene with the lampshade, iron board clutching refugees offers any hope of civility.

At the heart of this play is a long battle scene where characters repeatedly shoot at each other calling “victory” before dying and being replaced with yet more unidentified persons. We’re suddenly in a horrifically violent and robotic video game. We get it, but like a video game, it goes on ceaselessly until one gets over the repetition and becomes hooked. Audience culpability and complicity (with SM dominating so much of our lives it’s a big theme) is called into question-we could choose to look away, look at our neighbour or the ceiling and resist. But we don’t-we blindly watch. Person and Daughter are the only two who maintain a diplomatic distance to the whole proceedings until again, tragedy strikes.

On the face of it, the play seems like an absurdist romp with a talented cast and a sharp, if on the nose, critique of modern day society.

But just under the surface, there’s something at work which seems to be a reflection on language and how other playwrights have tackled similar themes and social ills. It’s impossible not to think of Caryl Churchill’s later experimental work. Paul Bentall’s Former Mayor dressed in a head kerchief by Costume Designer Anne Marie Woods is Sam Beckett’s Willie from Happy Days down to a tee. There are also echoes of Sarah Kane, Alistair McDowall, even Chekhov.

Halfway through comes a scene that is the best. A beautiful monologue embraced lovingly by Siobhan McSweeney which has you gripped. It is a roll call of words hammered out against the bombs. The word is mightier than the bomb, even if some of our politicians seem lost for them.

The show has many false endings in tune with its “what if and what next” qualities. Occasionally it dips a little but one is always pulled back-like my plus one who could not take his eyes off Sophia Di Martino ’s sweeping brush delicately gathering all the rubbish. I asked him why later and he said he didn’t know, but that he felt compelled. This sums it up.

The show ends as it starts-with a surprise. Chloe Lamford’s design gets a bit Twin Peaky. Anna Watson’s lighting and Pete Malkin’s sound combine to remind us we could be in a computer game. Or Person’s head. Who knows?

It’s a dizzy, energetic frenzy of a play. There’s not one meaning to take away but many. Just right for the pluralist, multiple identity society we now live in where collective meaning and truth can be hard to find.

Until Sat 11th at the Royal Court