Stories about grief always feel unbearably pertinent to those who have lost. And those who have lost often feel an unbearable urge to document their grief. Those who are left behind can find themselves in a catch 22 of sadness. My own story is for another time, but as I sit in the audience of […] 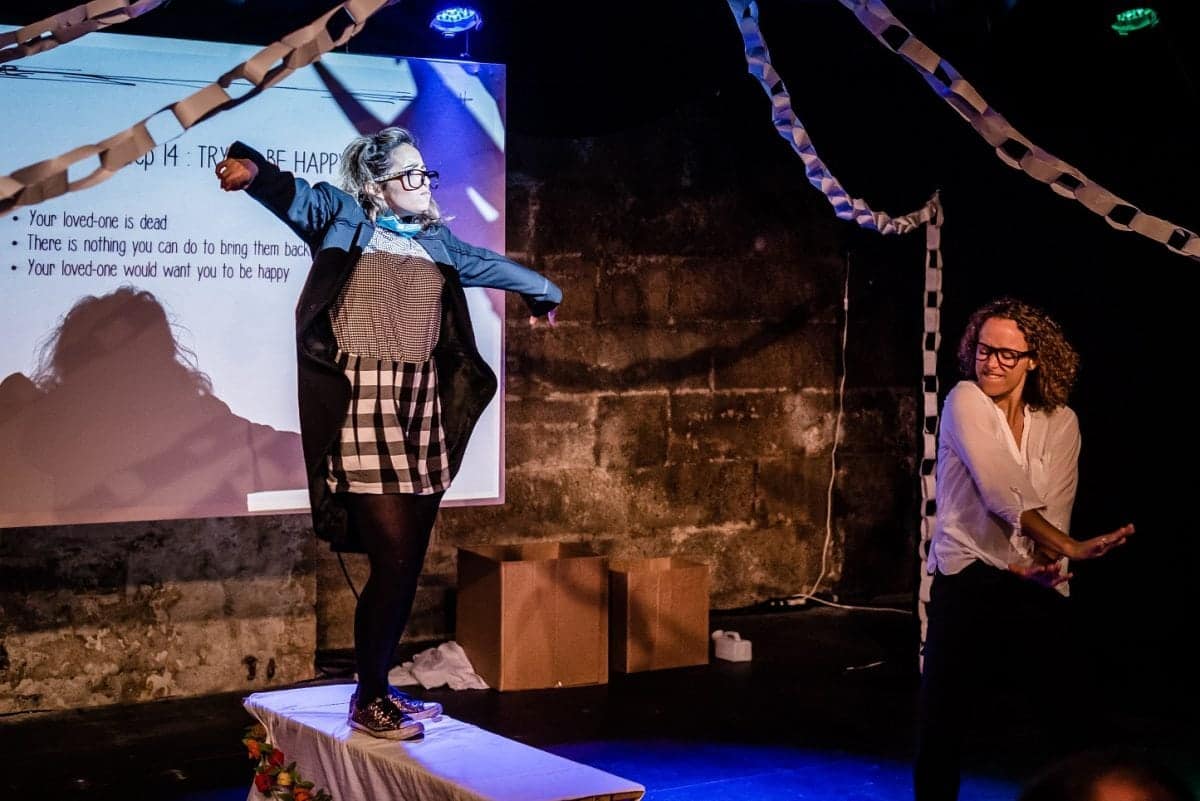 My own story is for another time, but as I sit in the audience of My World Has Exploded A Little Bit at the Ovalhouse, I completely understand why this play was written. Created and performed by Bella Heesom, with Eva Alexander in tow as her musical sidekick (cape et al), My World Exploded is Heesom’s story of her own clash with mourning.

Don’t worry guys, it’s not all doom and gloom! Heesom has helpfully compiled a 17-step guide to managing grief presented as a lecture, by the end of which she promises the audience will be able to conquer death. Armed with a PowerPoint presentation, a box of props, and using herself as a case study, Heesom drags us down the path of bereavement management with such helpful advice as, “Adopt a motto”, “Get out of bed” and, “Howl”. If Heesom is keeping us on the sensible, straight and narrow, Alexander is doing anything but. Even from behind her piano she manages to disrupt the lecture with surreal asides and inappropriately jaunty ditties. When Heesom explains the difficulty of conquering death, Alexander launches into a rendition of “You’re not dead, I’m not dead, they’re not dead” on repeat. This may have been an attempt to derail the logical bereavement advice, but really that’s the kind of motto I can get on board with. We’re only ten minutes in when I realise I’m probably not cut out for this. The audience is asked to turn to the person next to us and tell them, to their face, that they’re going to die. But I can’t do it. Fast forward twenty minutes and I’m making a valiant effort to weep as covertly as possible, because I’m sitting in the middle of the front row and I didn’t bring any tissues. Rookie error.

Heesom and Alexander deftly walk the tightrope between humour and sadness in a show that will pluck firmly at the heartstrings of anyone, bereaved or otherwise.  Fortunately there’s enough of both to make the show a happy experience as well as a cathartic one. Just remember to bring a fistful of tissues. And maybe sit at the back.