Old certainties die and new ones rise as sure as the sun. Stories with their truths embellished are told to maintain a sense of control, even as the sheep farming family in Simon Longman’s sparse piece realises that their fate might be out of their hands. As two sisters, Becky and Anna, eek out a […] 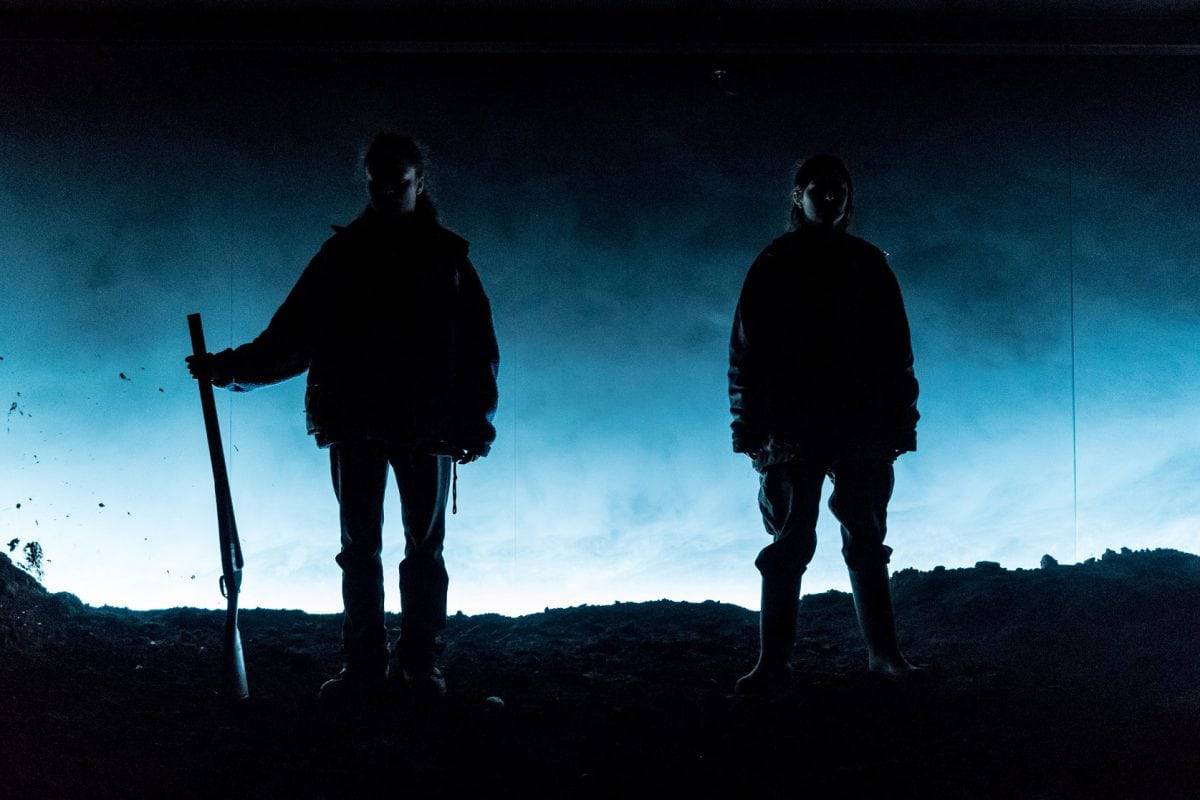 Old certainties die and new ones rise as sure as the sun. Stories with their truths embellished are told to maintain a sense of control, even as the sheep farming family in Simon Longman’s sparse piece realises that their fate might be out of their hands. As two sisters, Becky and Anna, eek out a living hustling ewes on hills that seem far away at the top of all England, a stranger, Guy, as gentle as the sisters are rough and a wandering migrant, himself a scrapper, joins them in their search for meaning. When Ben, the sisters’ brother returns after a three year absence memories are sparked, trauma is relived, the play blasting ambiguous truths left, right and centre with as much electrifying shock as Lee Curran’s startling light changes.

Gradually Ria Zmitrowicz’s Becky is shorn at like a sheep to reveal the little girl with an iron will that she really is. Rochenda Sandall’s Anna flowers into a woman-surprising on Chloe Lamford’s blasted heath of a stage, which looks both like mountains towering in the distance and mounds of dark earth and miniature hills that the sisters seem to be born out of close up. Director Vicky Featherstone has the sisters with their feet dug manfully into the ground cowboy like in the play’s prologue.

Over the course of the 100 minutes, as their livelihoods collapse around them, their bodies seem to disintegrate, become less disconnected from the earth, more prostrate-may be in awe, may be in despair, before they ride up again on the crest of a new wind. Alec Secareanu as Guy, the migrant from an unknown country, could not be more different. As violence and killing confront him almost immediately from his first point of contact with the sisters, his body is hunched over like a gnarled and bedraggled tree (Featherstone works to create beautiful physical images with the cast throughout the piece).

But then he grows and owns the earth, walks tall on it. What is heaven for him is hell for the sisters. Alex Austin’s Ben is moody and frustrated in answer to his sisters’ continued external cheerful determination to battle on being sheep farmers even though they are slipping like a landslide further and further into unimaginable poverty, isolation and heartache. But what really cements this hapless tribe of lost, struggling souls together and gives drive to the themes preoccupying Longman is Alan Williams’ Mick-a sturdy, down to earth, losing his mind story telling granddad. Longman’s repetitive use of wordplay through the stories Mick tells conveys the family’s struggle for survival and control when faced with continuing tragedies, each one worse than the one before it.

It’s impressive that Longman does not try to give solutions or answers to the family’s predicaments. He paints a picture of extreme despair embodied by a very rural and forgotten family. Social structures that are there to provide safety nets prove to be full of holes. It’s also a picture of how precarious modern farming and shepherding is. If you can’t afford a vet how do you deal with sick animals upon whom you are financially dependent?

If your only skills are being able to read what the weather will do or knowing the exact moment a ewe will lamb, how can you enter a modern job market? If you have to fruit pick for a living, how will you deal with “foreigners” who are taking the only job you can do as a redundant farmer? If all the farms around you have withered and died and all the pubs have closed (happening more and more in the countryside) how do you socialise and give and receive support?

This play is about much more than these real, modern practical concerns though. There’s almost too much going on for Longman to handle- and us-but not quite. Longman manages to fuse his questions about practical living with spiritual concerns and themes. Everything is “put down” in this play. At one point, the sisters even lie on the ground as if they too expect to be “put down” like an animal. Longman’s repetition of words reinforces his preoccupation with the idea that all things are inherited and will repeat themselves-the family struggles with the idea of inheritance. The central question seems to be-how much should and can you control your own destiny?

As in real life, there are no answers, just this beautifully fine production with some glorious lighting from Curran and barren frightened soundscapes from Matthew Herbert and Peter Rice. Overall the design and the timbre of the piece, including Lucy Walshaw’s detailed costume, has you wanting to run from and run towards this terrifyingly cold creviced landscape at the same time. And isn’t that our lives?

At the Royal Court until 10th March