Commonly seen as a theatre of the absurd play, Exit the King (this is a new version by Patrick Marber) is one of four by Eugène Ionesco where the main protagonist Berenger is written as a kind of Every Person. Though Ionesco is a towering presence in the history of modern theatre, often grouped by […] 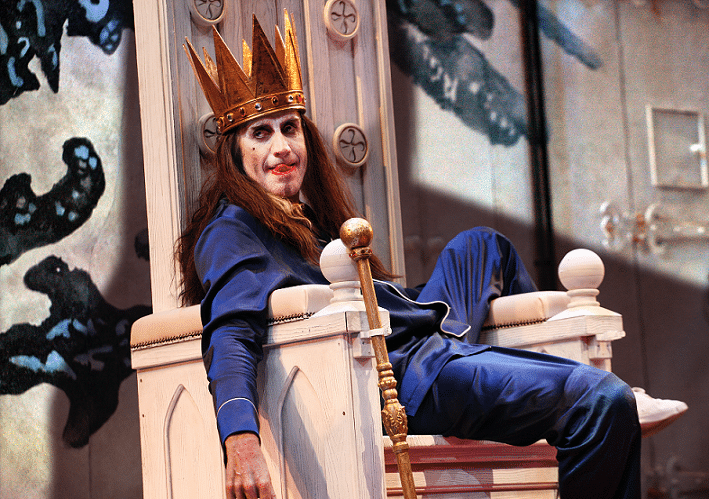 Commonly seen as a theatre of the absurd play, Exit the King (this is a new version by Patrick Marber) is one of four by Eugène Ionesco where the main protagonist Berenger is written as a kind of Every Person. Though Ionesco is a towering presence in the history of modern theatre, often grouped by critic and scholar Martin Esslin with writers like Sam Beckett and Jean Genet, this is the first time his work has ever been performed at the National Theatre. No wonder-once championed early on by critics for his unusual style he was almost immediately rejected by the British critic Kenneth Tynan in a startling debate about the role of theatre in our society which became known as The London Controversy in 1958. So is now the time for an Ionesco reappraisal? He believed that art was independent of everything, especially politics, the existentialism in his work can sometimes reduce audiences to the same level of paralysis as experienced by his characters (perhaps particularly in this play). There’s also a school of thought which believes that Ionesco negates the need for critics to make a value judgement on the relevance of a production as he himself takes a neutral stance and his works can also encourage audiences to do the same. Not for him the social role of theatre (a trend of domestic theatre at the moment) but a mode of theatre that is far more irrational where any form of logic or ideology can collapse like sand. So what’s to be made of Exit the King now when an Ionesco play has been traditionally seen as full of empty-headed banalities with a reductive personal vision which serves no use?

Well, all of Ionesco’s solipsistic and existentialist attitudes are ripe to pick over in this new version.  Berenger is a King in some unnamed land in a time not given (although he has been alive for 400 years) and is about to die. Of his two Queens, Marguerite, the older and less favoured and commonly seen as the wisest, wishes that he may be told the truth about his impending doom. The younger Queen, Marie, resists this philosophy, preferring that he may live out his last hours ignorant but enjoying life to the full. Meanwhile, the Doctor and Juliette the maid run around like headless chickens whilst the Guard is presented like a wind up mechanical toy or statue on Anthony Ward’s astronomical clock like stage. The concept behind the design stays true to Ionesco’s obsession of an external collapsing reality where time is running out which is in tune with the King’s own demise (for Ionesco form mirrors content to such an extent that there can be nothing left outside of it). Once the King is told of his fate, the countdown well and truly begins-the two Queens and the maid whizz around the stage as if marking the seconds, never mind the minutes-this play plays out in real time, another of Ionesco’s jokes and of course, not only must the King die but the Queen too and everyone with her every night.

Before we meet the King we meet those closest to him-Derek Griffiths’ Guard complaining about the lack of heat is first. Traditionally this role has been criticised for being a wooden cliche, but as time goes on, Marber, who also directs, unmasks a more contradictory character, who, in the guise of a town crier, ironically comments on the action. Indira Varma’s Queen Marguerite is unlikeable at first-pulling rank on Debra Gillet’s Baldrick like Juliette for calling the Throne Room the lounge. Nothing is done to dispel these feelings as she engages in petty jostling for attention from the King with Amy Morgan’s Queen Marie or when she experiences joy in undermining the King when he belatedly chooses to show compassion towards his subjects. Yet at the end, she must step up to assume her role as the Divinity of Death to guide the King to his final resting place and hold back on her more tongue lashing verbosity. Still, Varma gives us a woman who has cause to hurry her King to his death-she wants his Kingdom, whether to save it or rule over it with the same force of tyranny we do not know-Ionesco may not have liked politics and wished to erase it from his plays-but it surfaces here in hints at personal ambition. Morgan’s Queen Marie seems the cliche party girl-even her dress says it-but she espouses a constant humanity most of the others lack. Adrian Scarborough’s Doctor is a conundrum.  Wearing a pointed hat as if a witch, like Queen Marguerite he oscillates between obliging obsequiousness and a brazen disregard for the King’s plight and appears interested only his own power to guide the King through the five stages of grief  (interestingly this play premiered seven years before the famous Kubler-Ross model on grief was published in 1969). He also is not exempt from accusations of tyranny and the fact that perhaps his prognosis may not be trusted, enhances the ability to have a debate not over death as fact but over its significance and nature. Science wants to get on with it, human nature wants to defy it and draw it out to gather every last drop of experience.

Debra Gillet’s Juliette shows more humanity and yet is one of the more perverse characters-her humanity may be a mask that she is required to show as the all smiling, obeying servant only there to look after the needs of others, enabling us to see a gentler side to Rhys Ifans’ mad-like, anxiety-ridden yet jocular King. Ifans’ King who accepts and then rejects his sentence in a back and forth for the 90 minutes is all grimaces, contortions yet full of antics and tomfoolery. Even his entrance is a little make believe-like a child playing at it-so convinced is he in his self-made authority that he can pretend to be a King. But as the play goes on, his is a search for the real truths of human nature which for him, exist beyond and despite the reality of his kingdom suffering and collapsing around him. The suffering of others does not matter because it is part of his own demise. It’s this kind of solipsism which Tynan and others would come to rail so against, not able to see where it can go and what message of hope it can give. But, apart from the general despair and then acceptance of death which is a central theme in this production, there are also other things to take away. Ionesco wanted to write in such a way which supported his “commitment to anti-commitment”. He wanted to avoid combining art and politics, wary of any propagandist opportunities it might afford the Right or the Left to impose their various ideologies. So created out of context is this play, almost in the no man’s land of human experience and the contradictory nature of the imagination, it can be hard to take anything substantial away. Yet Marber and co have succeeded.  The play is acted under the shadow of the Eagle painted on the back wall- symbolic of the importance of honesty and an adherence to truthful principles. Below it is the Lion, meaning strength and leadership and courage. The play is about a clash of both spiritual values, how they can be misinterpreted, abused and as we are seeing with our world leaders today, manipulated to hijack the moral principles of others. The King here tries to deny the fact of death and invent his own truth, confusing others in the sometimes dizzy depths of his imagination and childishness. He goes against the wishes of others and tries to undermine death itself and everyone just about, apart from Queen Marguerite, goes along with it in the end like a common herd of Rhinos. Who says the anti-political Ionesco isn’t political or that he can’t be relevant because he is now. Bring on more because he seems just right for our times and a provocative breath of fresh air.

At the National Theatre until 6th October 2018
Pic: Rhys Ifans as the King in Exit the King. Image by Simon Annand