There is a term in banking circles called the “magic roundabout”, which is when a taxi drives you home from work at 7am, waits for you while you shower and change and then takes you back to the office. It’s every intern’s nightmare. In a job where 100 hour weeks are the norm, working shifts […] 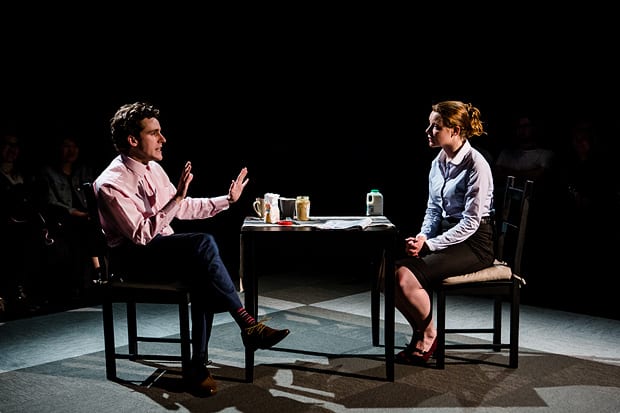 There is a term in banking circles called the “magic roundabout”, which is when a taxi drives you home from work at 7am, waits for you while you shower and change and then takes you back to the office.

It’s every intern’s nightmare. In a job where 100 hour weeks are the norm, working shifts back-to-back is a punishing undertaking. But it is also deemed necessary. As star pupils from top universities vie for full-time positions at the city’s investment banks, capitalising on a once-in-a-lifetime opportunity to turn a ten-week internship into a full-time position can seem life-defining.

Throw in to the mix fiercely competitive co-workers, family pressure, an insatiable personal desire to succeed and the bounty that awaits if you do and you get the veritable hotpot of pressure that forms the crux of Run, a stagetext captioned performance running until April 9th at The New Diorama Theatre.

In November 2013, Moritz Erhardt suffered a fatal epileptic seizure after reportedly working 72 hours straight at an intern job at Merrill Lynch. His death became a talking point for the nation as investment banks such as ML, HSBC, Morgan Stanley et al faced the heat over their rigorous and often ruthless internship programmes. According to reports at the time interns confessed to getting “four hours’ sleep about 70 per cent of the time”, and many were unsurprised that Erhardt had worked for three days without sleep.

Run looks to point the spotlight on the glamour and grind of the Square Mile with an immersive account of four interns. It touches on the circular, habitual, recurrent nature of the work-play-eat-sleep lifestyles, but also poignantly brings to life the mentally taxing nature of it all.

Make no mistake, this is a brilliant drama.

You identify with each character, sympathise with their plight and ultimately ride their emotions when they start to spiral; which is a fitting verb. They portray the twenty-something aspirational worker with brutal accuracy. Straight out of university, with the weight of their parent’s aspirations on their shoulders, they shoulder the intersection between ambition and youth, where paycheque after paycheque buffers the rigmarole that is the quest for success.