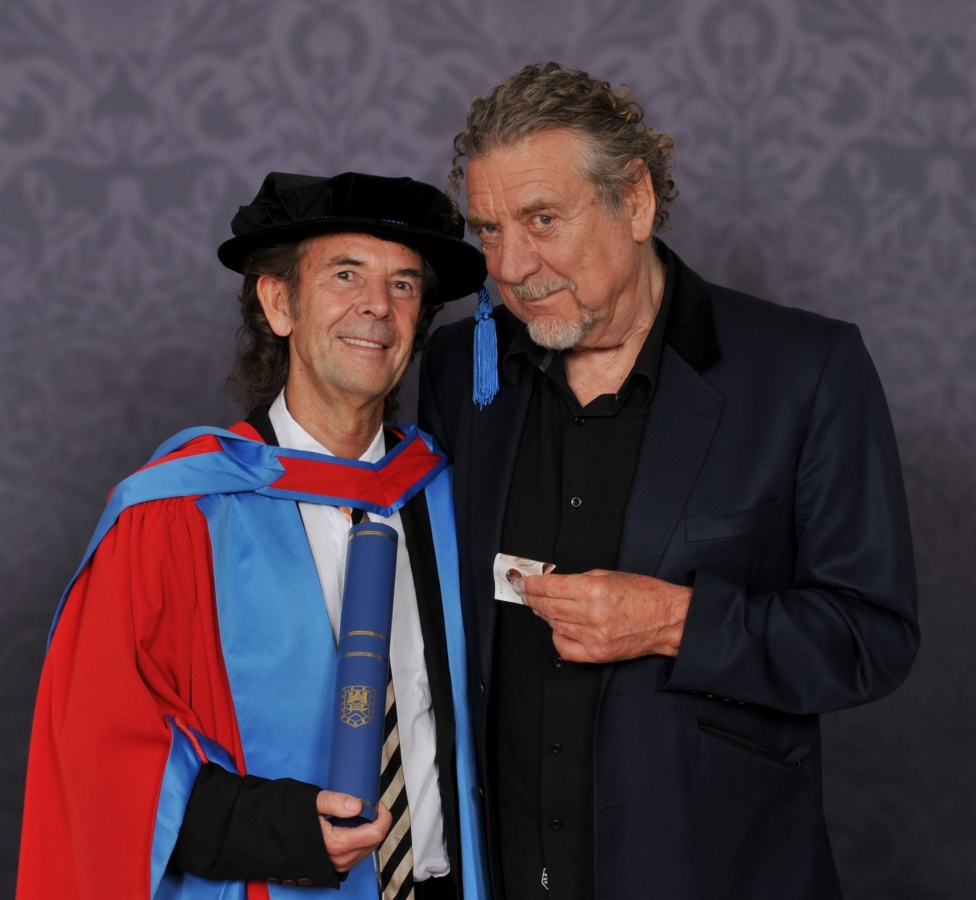 Led Zeppelin star Robert Plant attended a graduation ceremony for a music agent – who gave him £8 he was owed for playing a gig more than 40 years ago.

Multi-millionaire Plant, 70, was due the cash after he played a concert with his act ‘Band of Joy’ in the 1970s.

But he was never paid by Rod MacSween – who had booked him while he was a student social secretary.

The duo went on to be huge stars in their respective fields – with Rod later representing
Aerosmith, Black Sabbath, Guns n’ Roses, Ozzy Osbourne, Pearl Jam and The Who.

His eight quid debt to rocker Plant was finally settled when they both appeared together on stage at the University of Exeter.

Mr Plant was helping his fellow legendary music industry figure, who played a key role in his career, celebrate being awarded an honorary degree.

Mr MacSween joked he had still not paid Mr Plant £8 for the concert he played there in the 1970s, and offered him a £10 note, which he came on stage to collect.

Mr Plant joked this wasn’t enough, and told his friend it had been “great sharing my adventures with you”.

Mr MacSween studied chemistry and statistics at the University of Exeter, where he had a first taste of working with bands such as The Who after being elected as Students’ Guild social secretary in 1969.

During that time he booked artists who were in their early musical careers like Pink Floyd and Robert Plant’s ‘Band of Joy’.

After graduating he worked as an agent at major music booking agencies before founding ITB in 1976.

In 2015 MacSween was the recipient of the prestigious VIP Classic Rock Award.

Professor Smith met Mr MacSween when he was social secretary at Southampton University between 1973 and 1974, and described how he was one of the “most admired and professional” music agents he worked with.

He said: “From the beginning of his career Rod developed a reputation as a shrewd and unflappable negotiator who showed huge loyalty to his clients, with whom he has built strong and lasting friendships.

“Rod’s career has been a story of exponential success, with very few bumps in the road, testimony to his outstanding talents as businessman and leader of global company.”

Telling students he hoped Mr MacSween’s career would inspire them, Professor Smith said: “It is absolutely obvious to me that Rod’s success as a businessman and entrepreneur is not simply down to his unique skills and talents. He is at the top of his field because he is also passionate about music.

“And because throughout his career he has taken time to build and cultivate authentic relationships with clients based on mutual respect and trust.”

In his speech Mr MacSween explained how his role as student social secretary had provided “crucial and memorable experiences” and said he wanted to express his “heartfelt gratitude” for the honorary degree.

“As a student the idea of returning years later to take my place on this platform in the Great Hall would never have entered my mind,” he said.

“My work as an international music agent has brought me in contact with celebrated musicians and legendary bands, many of who I was in contact with early in my career. Nourished by fierce loyalty and mutual trust these relationships have endured through the decades and I am deeply proud to represent some of the greatest musicians and artists in the world.

“I am lucky. My work remains my passion and continues to energise and enthuse me. It is my driving force. I love the music and I love working with the artists I represent, they have become like family.”