By Will Bateman (WillBateman6611) 22.5.2015, Village Underground, London Leon Bridges takes to the stage with effortless cool, dressed 50s smart with a shirt and bow tie, guitar in hand, launching into his set with one of his lesser-known songs, the swinging and jiving “What Can I Do?” His on-stage-banter is short but appropriately slick. Three […] 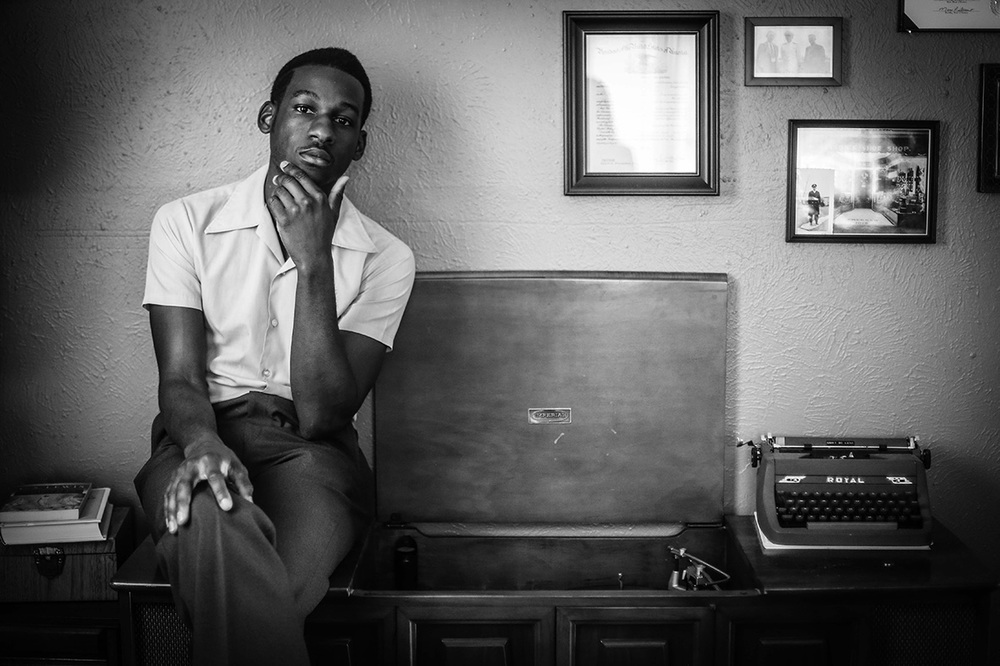 Leon Bridges takes to the stage with effortless cool, dressed 50s smart with a shirt and bow tie, guitar in hand, launching into his set with one of his lesser-known songs, the swinging and jiving “What Can I Do?” His on-stage-banter is short but appropriately slick. Three songs in he pauses to alter his capo. Beginning again he’s stopped by a band member who re-fixes it for him- “Do you still love me?” Bridges asks. Yet the question is a foregone conclusion, given the earlier announcement of further shows at the Shepherd’s Bush Empire, making this smoky, dimly lit Village Underground show something of a rare treat. The venue is a perfect fit for the moody, soul-den atmosphere Bridges creates, but it won’t be long before he outgrows these intimate stages.

“Lisa Sawyer” provides a beacon of familiarity; a slow, swaying and soulful tribute to his mother back in Texas, along with lead album single, The Temptations-reminiscent “Coming Home”. If you have been following Bridges’ online presence closely you may have come across his cover of “Chain Gang” by Sam Cooke, an ideal track for Bridges’ smooth, silky, voice and a fitting nod to one of his own personal icons. Its absence in the short 50 minute set is disappointing, but with inevitable comparisons on the horizon, it’s understandable why Bridges may seek to distance himself from overshadowing peers, especially with the genres’ dwindling presence in today’s mainstream.

The lesser-know tunes from his upcoming album “Coming Home” (released 23rd June, he reminds his audience between songs) still have no problem maintaining the high tempo movement of the crowd. Case in point, the deceptively bluesy “Twistin’ and Groovin’”, which tells the story of how his grandparents met, does exactly what it says on the tin. He manages to effectively showcase his versatility with dabbles into R&B, switching up the fast rhythm with ease to his church-gospel side on “I Don’t Remember”. And if you needed a testament to Bridges rapid rise and growing fan base (in addition to James Bay’s presence in the crowd) he also introduces Jessie Ware onstage for the encore of “The River”, closing the show on a sombre note.

In a time of immediate gratification, crowded music marketplaces across multiple mediums, and endless questioning whether or not “guitar” (rock) music is dead, there is a concerning lack of personalities of Bridges’ classic soul/R&B genre in the mainstream. You can stick a Sam Cooke or Otis Redding LP on, and maybe you have a half decent soul night at your local, but the likes of Eli “Paperboy” Reed, Gregory Porter, and Leon Bridges are essential spokespeople who need to take the spotlight now and then to get in front of audiences willing to take the time. As Leon Bridges reasoned in a recent interview, “I just felt like I had to carry on the torch.”