A beating heart flutters against the centuries of Ghent history in Lam Gods, a show working with the people of the Belgium City, most of whom are non-actors. It is a heart formed by a group of people coming together in a world premiere with Milo Rau at the helm, a Swiss director known for […] 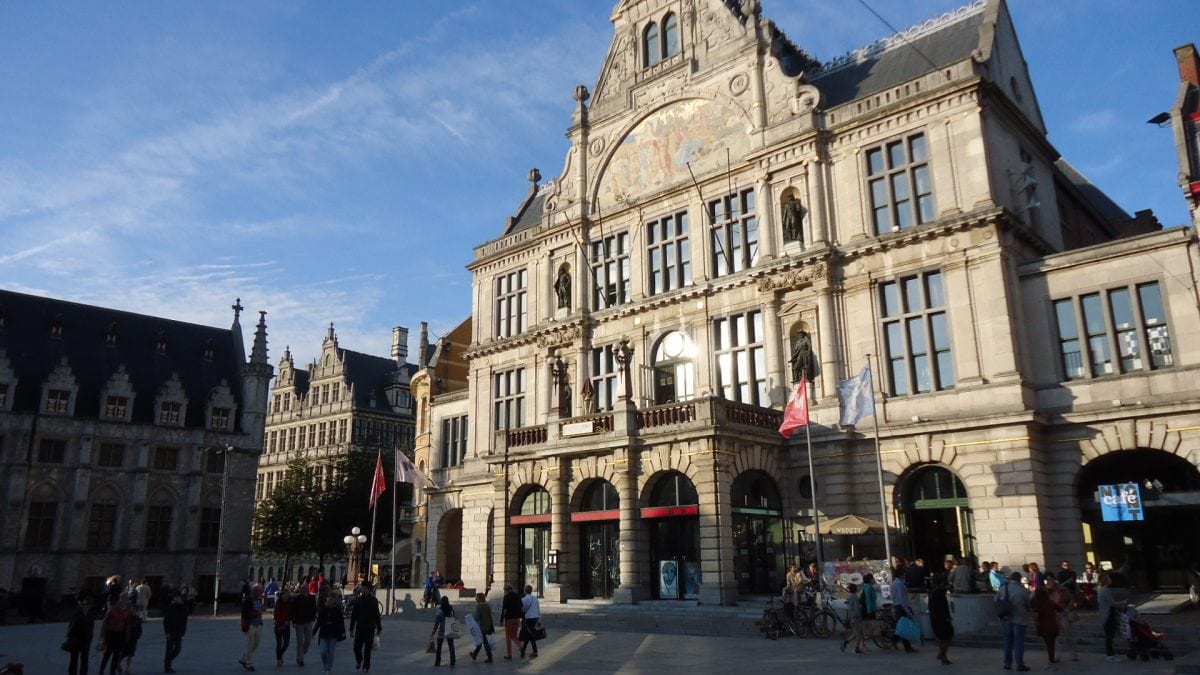 A beating heart flutters against the centuries of Ghent history in Lam Gods, a show working with the people of the Belgium City, most of whom are non-actors. It is a heart formed by a group of people coming together in a world premiere with Milo Rau at the helm, a Swiss director known for putting world violence centre stage. This dynamic work incorporates the lives of modern-day Belgiums into the depictions of city dwellers as biblical and religious figures painted centuries ago in Ghent’s most famous painting, The Adoration of the Lamb by the van Eyck brothers in the 15th Century.

The juxtaposition, where today’s citizens are embodied in the medieval altarpiece through a modern-day video installation breaks down the boundaries and barriers between centuries, people and animals. It asks what is a city theatre for? What does it mean? What does an authentic representation of immigration and refugees over the centuries look like? What are and why do we maintain boundaries between humans and animals? Shouldn’t animals too have a voice?

True to his recently penned manifesto, Rau wants to move away from traditional theatrical norms. On the tote bags given to the press at the show’s premiere, there’s a quote in English-“Create your own classics.” Rau writes in an essay “The city theatre of the future not only reflects but creates new ways of living, of thinking togetherness.” To show he means business and that a play working with non-actors can enter mainstream theatre, Rau is staging Lam Gods from 29th September to 20 October and then will tour it to Amsterdam and Stuttgart. Here in the UK “community” shows as they would be called, would be capped at a couple of days performances and/or shown in our smaller studios. Rau is presenting a formidable provocation and a challenge, even harking back to Athenian theatre where non-actors were able to talk about issues or stories which concern them most.

The show has already entertained controversy before its first night-there was a political storm in Belgium’s parliament, when, in order to remain true to the symbolical figures within the painting, NT Gent asked former jihadists to attend casting calls. The theatre did not intentionally set out to “provoke” but a debate was opened up about what and who should and could go on our stages and who should decide.

The people should it seems. This includes journalists and Ghent’s Mayor in a display of extraordinary support and engagement with hugely charged political speeches before the show’s opening. Rau is being clear-he is intent on collaborating with all facets of society to make work, including journalists and politicians.

This desire for collaboration and inclusion is what brought about Lam Gods. Hundreds of locals were auditioned for the parts of Adam and Eve, John the Baptist, martyrs and angels. The non-actors convey their personal stories and in an almost collective choir-there is a literal one consisting of a small group of children singing folk songs-share them one by one. Adam and Eve, man and wife in real life, undress as they reveal their reasons for wanting to accept these roles. They simulate sex in a love scene as their children, onstage for the first time, look on. This act has also caused controversy-camera crews from across Europe have descended on the theatre and as Rau has an open door policy, they have not been turned away. Put in front of an audience though, this scene seems to elicit a collective harmony and a sense of the universal in which both performers and audience seem to share.

The show moves to other stories. A shepherd, his dog and his sheep. NT Ghent’s cleaner. One story comes after the next. Supported by a mosaic of video installations which form a moving contemporary re-imagination of the original work, each story compels and transports us. It’s an eclectic group of people with disparate backgrounds- from the new father who becomes John the Baptist to Fatima, whose son joined IS and was killed. Performance after performance Fatima will talk about him, over and over she will fight her tears. And filmed live onstage the audience is given a choice of where to look-at the video image of Fatima surrounded by darkness – a sort of mise en abyme- or at her on the stage where she is supported by the people of Ghent. As well as adhering to von Eycks’ idea of immortalising their neighbours and colleagues, Rau seems to be asking questions about the symbolic use of video and the power relations it contrives. What is the social exchange between video subject and audience or audience and performer onstage and how are they different and why? How do we perceive someone differently if we see them depicted in isolation instead of choosing to see them connected to a broader picture and context? Fatima though does not ask for pity. She does not shirk from questioning her deceased son’s principles or reasoning. When Fatima is asked to represent the Virgin Mary, the mother of Jesus, it is a moving moment where the social positioning allows for catharsis. Fatima has a lot of problems with Jesus in relation to her son, becoming the Virgin Mary allows her to create for herself an ironical distance of which she is totally aware.

As directed by Rau, anything can happen in a show which examines what’s permissible onstage as this relates to what is permitted for societies to discuss openly and honestly. There are two things that can’t be shown live-the sacrifice of a sacrificial lamb (the theatre would be closed down admits press officer Tom de Clercq) and an IS fighter who has not already been tried and has served their sentence. In some ways, these restrictions promote the theatrical concerns of the play-how to document, how to make real, how to confront the truth. As the onstage shepherd sheers a sheep, the video of one being butchered is presented simultaneously above our heads. Why is it this allowed to be shown on video (although it is still traumatic) but not onstage? The result remains the same. Why can’t we allow proper discourse with a Jihadist? The use of video causes us to look at our own hypocrisies and what we are willing to oppress in the name of fear. Still when the Jihadist speaks you can hear a pin drop-Belgium has more nationals fighting for jihadist forces as a proportion of its population than any other country in Western Europe.

We can’t forget that this is theatre and that we are watching a curated piece and that we are being taken through it by the play’s only two professional actors, Frank Focketer and Chris Thys who behave like shamans. Brechtian like subheadings notifies us when the play is beginning and when it is ending and there is a lot of laughter at the play’s comical self-reflexive nature. Andie Dushime and Nima Jebelli sit like pilots shifting us from the immediateness of the present to the beginnings of time giving an authorial viewpoint. There is something incredibly transcendental in bringing together these voices all connecting and discovering meaning through a 15th Century painting. Lam Gods is rewriting how theatres should work with non-actors, ie its audiences- and changing how the public identifies with them. It is taking power away from the few and reallocating it to the many. A few scenes within the play happen unexpectedly – the birth of a baby five days before the first night which was filmed and incorporated into the piece. Children turn up without warning to be with their parents onstage. It is genuinely a theatre of spontaneity which reinvents itself as reality changes.

With Brexit looming, it’s up to theatres in the UK to reach out to their partners in other countries and find ways of engaging in a cross-exchange of ideas before it is too late-otherwise how we interact with our audiences and communities and include them and therefore affect positive social change may suffer. NT Gent are leading the way and by having conversations with other theatres and other industries across countries in the EU-will UK counterparts follow suit?