(NOTE: I am going to try and keep the Spoilers to a minimum, however as I am an imperfect man whose life is a sham verging on post-apocalyptic horror, Spoilers will occur. As someone should post in every polling booth, Consider yourself warned!) When the Marvel-Netflix production of Jessica Jones premiered its first season back […] 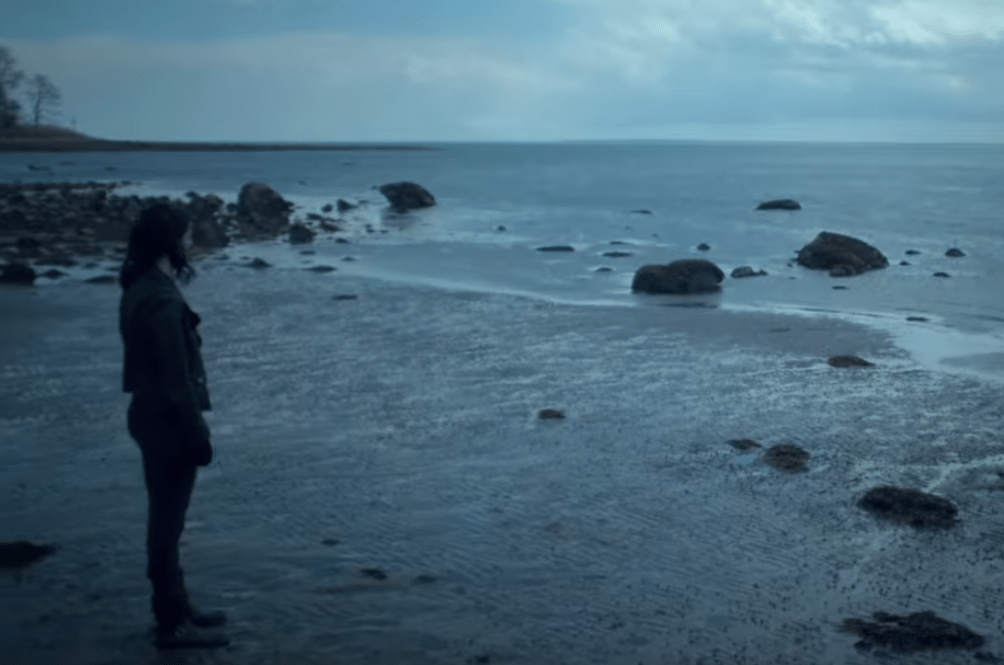 (NOTE: I am going to try and keep the Spoilers to a minimum, however as I am an imperfect man whose life is a sham verging on post-apocalyptic horror, Spoilers will occur. As someone should post in every polling booth, Consider yourself warned!)

When the Marvel-Netflix production of Jessica Jones premiered its first season back in 2015 it’s fair to say that it was the one television show that truly merited the use of the word original in the phrase ‘original series.’ Granted, there had been series before it with women cast as private investigators, with superpowers, even (albeit rarely) series featuring women with PTSD, yet never all of the above in one package. I’ll put it to you this way: Murder She Wrote’s Jessica Fletcher was never raped by the quaint old country doctor whose neck she then snapped like a wishbone in the last scene. Or did I miss that episode?

Added to all that, Jessica Jones featured some absolutely bell perfect performances in Krysten Ritter as the orphaned and alcoholic title character, Carrie-Anne Moss as the cold yet complex attorney Jeri Hogarth, Rachael Preston as Jessica’s adoptive sister, the ex-child star Patsy/Trish Walker, and David Tennant as an absolutely magnificent villain playing the mind controlling Kilgrave. If ever a Doctor Who alumnus wanted to bury his previous life in the TARDIS, Tennant dropped the entire Himalayas on top of his. Jessica Jones was easily my favourite series that year.

Upon having binge-watched the second series that premiered on Netflix March 9, the thing I had to keep reminding myself of was that the show was written in and began filming in 2016. Why is that significant, you ask? It is because Jessica Jones appears to be a response to #MeToo, #NeverAgain and all the other, shall we say, post-Weinstein movements that collectively have created a strongly unified and effective feminist force the likes of which there has not been since the late 1960s to early 1970s and peak Betty Freidan, Gloria Steinem, and Glenda Jackson showing the world just what playing a Queen should really be about in Elizabeth R. It’s not too far a stretch (well it is, but let’s go there anyway) to imagine that when confronted by some Spanish emissary who states he refuses to take no for an answer, Jackson’s Elizabeth I might respond with Jessica’s reply, ‘How rapey of you.’ In short, Jessica Jones is not a reaction or a cashing in on the new feminism, rather it was and is one of the gravitational forces that caused the tide in the first place.

But you know, this series is a sequel and as anyone who ever saw any movie with 2 in the title knows, sequels can be rather dodgy affairs. They tend to either repeat the same original moments become tropes that made them successful the first time out, thus making the series seem repetitive; or they ignore those tropes and thus disappoint the audience. It’s the difference between a standard job – accountant, lawyer, mortician or electrician – and an artistic career. If you’re good at the former, keep on doing what you do; if the latter, do the same but do it differently. And yes, that’s why very successful writers, directors and actors make lots and lots of money.

How does showrunner and producer Melissa Rosenberg choose to maneuver along this perilous path? Well, she chose to in two ways actually, both of which will be familiar to dedicated viewers of television and readers of comic books. One, there’s the good old Origin Story of how in hell did Jessica get super-strength in the first place. The problem with origin stories is that we know their outcomes, a problem that has – just to choose one at random – plagued Arrow for its five years of flashbacks. Just how much danger can Oliver Queen really be in when he’s being shot at by drug dealers in Hong Kong when we know perfectly well he ends up as Mayor of Star City five years’ later? What justifies this choice for Jessica is that, as we’ve said, she is a PTSD survivor. The very act of giving her super-strength without her informed consent is just as haunting to her as Kilgrave’s mind and body rape. We’ll come back to this one in a paragraph or two. 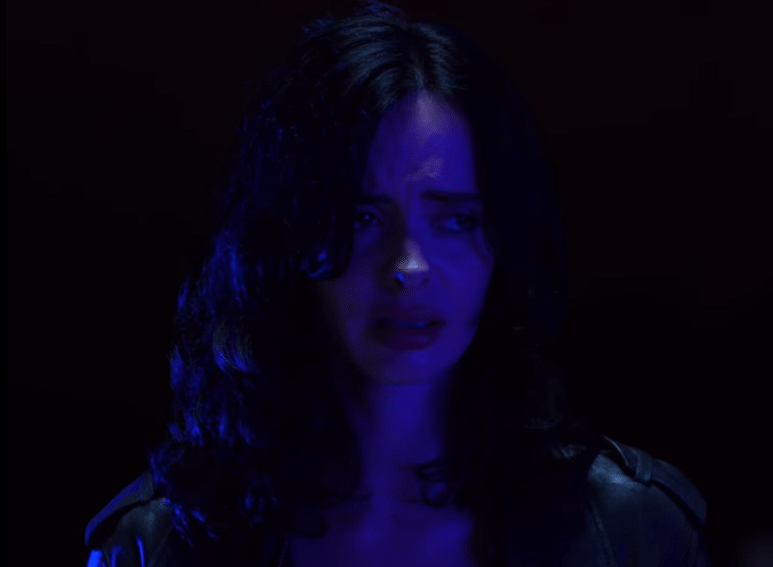 Rosenberg’s second strategy is again a familiar one, build up the supporting cast. Thus this series of Jessica Jones is as much Three Women as anything Chekhov ever wrote. I’d have to sit with a stopwatch and notepad to get these measurements exact, but my sense is that in terms of scene-by-scene story focus, the 13 episodes of this series break down as 40% Jessica, 25% Trish, 25% Jeri, and 10% for Jessica’s assistant Malcolm and other odds and ends.

Of the two major supporting cast stories, Carrie-Anne Moss’ Jeri Hogarth gets much the better deal, largely because it exists almost completely independent of Jessica. I said in a note to a fellow writer while I was in mid-binge, ‘Jeri’s story passes my Novel Test. If I read this story as a novel will I be satisfied as to its flow, logic and character development? I vote yes.’ Jeri has been diagnosed with ALS and, as Samuel Johnson remarked upon the guillotine, a death sentence concentrates the mind wonderfully. How Jeri is manipulated by the possibility of a miracle cure that stems from Jessica’s origin story, and particularly how Jeri enacts revenge for being conned, well this is all wonderful stuff with Moss playing the cold yet hurt acting game to a level beyond even Robin Wright in House of Cards.

As to the Trish Walker sub-plot, well, to me it didn’t quite all work out. Not to get totally spoiler-y, but for some damn reason or another Trish suddenly decides she needs to be a super-powered human like her sister and best friend Jessica. Here’s a Pro Tip: When a character ‘suddenly decides’ things, that’s usually not a good idea. This desire felt tacked on in the interest of comic book fan service because the original Trish became a superhero (albeit a pretty minor one) called Hellcat. All well and good, except if there are one hundred good reasons to want a superpower, wanting to be like Jessica Jones is the hundred and first. Jessica is alone, haunted, pisses people off virtually every time she opens her mouth, drinks bourbon straight from the bottle from dawn til dawn, is seemingly incapable of trust, and wears the same pair of jeans every goddam day. Role model! Rachael Preston does her level best with the material, but it somehow all slips away, much like Trish’s boyfriend Griffin who is a huge part of the series’ first five episodes then vanishes. Bye Griffin! 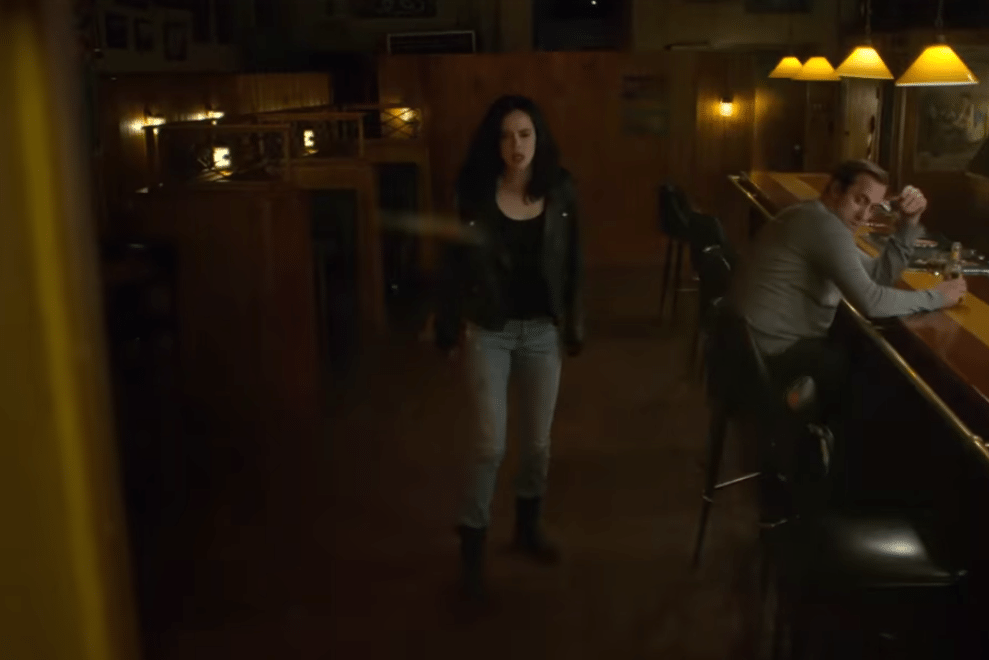 Krysten Ritter is once again magnificent as Jessica. If she missed an acting note anywhere in this series, I certainly didn’t spot it, even though one of the toughest jbs an actor has is to make the unlikable, likable. I still think that the best insight I have ever voiced about television is one of my very first: Characters you love watching on TV, you would absolutely hate in real life. Would you really want Cosmo Kramer as your neighbour? One of the best things Jessica Jones does is to keep reminding us that its central character is a case study and not a role model. But Christ, she does get you with the smouldering one-liners though.

And that is what I think I missed the most this series and it came to the forefront in the one episode where Tennant as Kilgrave re-appears as a haunting presence in Jessica’s imagination. Ritter just is not given an acting partner she can riff off of. She needs an equal. When Jessica finally does meet (and these Netflix series do take their sweet and lovely time in coming to a point) the doctor who tinkered with her, he’s, well he’s really rather nice. The dramatic tension is as weak as trying to punch a rope.
There are other themes and tropes present in Jessica Jones, particularly that of mothers and daughters, but in fairness to you readers I really can’t discuss them without giving the whole game away. Do watch the series, for the acting, most of the writing, and to see what great women’s parts are like when they aren’t all about meeting an appropriate boy. I look forward to series three.