In third year of uni I took a bit of a mental turn on a night out and was suddenly convinced that everyone around me was a replicant; a robot masquerading as a human, with viscous porridge for blood and a hard-wired hatred for humanity. ‘I’m the only meatbag here,’ I thought, ‘how could I […]

by Grant Bailey
in Entertainment, TV 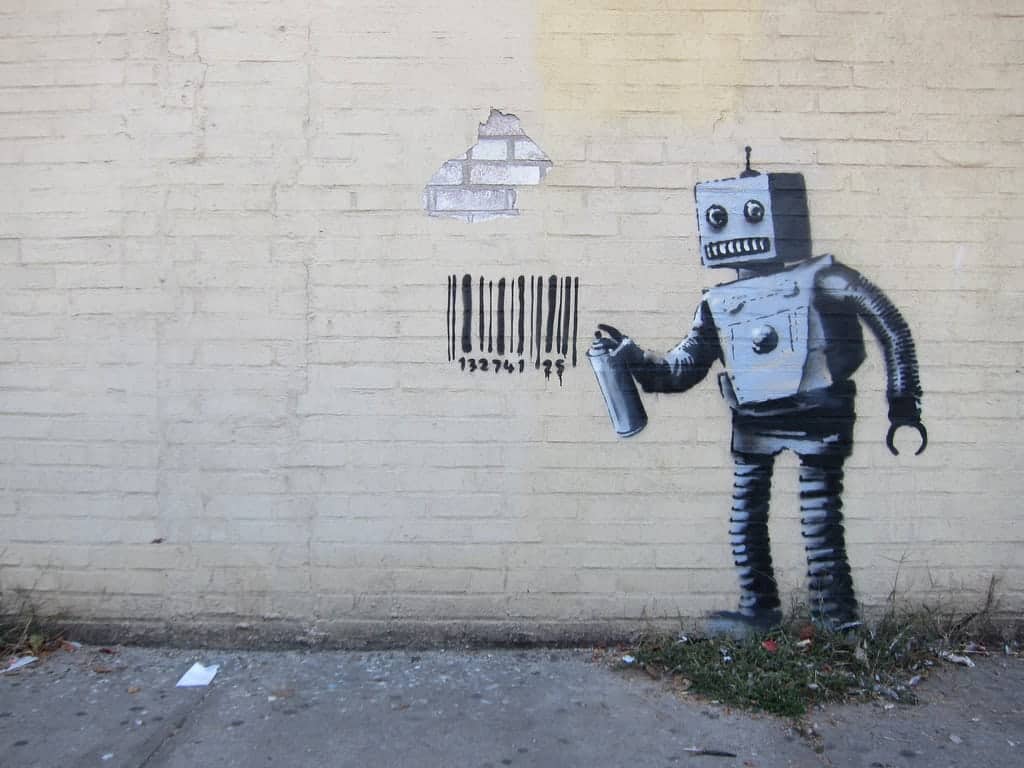 In third year of uni I took a bit of a mental turn on a night out and was suddenly convinced that everyone around me was a replicant; a robot masquerading as a human, with viscous porridge for blood and a hard-wired hatred for humanity. ‘I’m the only meatbag here,’ I thought, ‘how could I be so blind?’ My mind bucked and waned under the philosophical crisis of it. Then of course there was the physical threat. At any moment on the walk home  a soiled Daryl Hannah Pris-bot could somersault out of a darkened alley and tackle me to the ground, face grubby under glowing synthetic eyes, and squash my skull with her pneumatic thighs.

As far as I am aware this can all be chalked up to too many pints, too many club dickheads and just the right amount of Philip K. Dick. You can never know for sure, though, can you? The seed of doubt is planted. Androids and android technology is still in its infancy. Ish. And even if they were walking among us Isaac Asimov put the work in 74 years ago to safeguard us against robot-on human violence.

But, as I learned from a recent encounter with Persona Synthetic’s technical support team, even Asimov’s Three Laws of Robotics won’t save us from the calculated aggression of customer service synth Walt, the latest and surely most notorious escapee of the Persona Synthetics Facility.

It’s important to know that Persona Synthetics are currently in the middle of a massive Safety Recall. Are ‘Synths’ going wild in the streets and killing their fleshy masters? It’s hard to say for sure, but just to be certain I had a chat with their website’s Live Chat to see what was going on.

First off I selected my operator, the kindly-looking Walter, who looked like a young go-getter kind of synth, but soon revealed himself to be a humourless little bastard with no time for my japes. 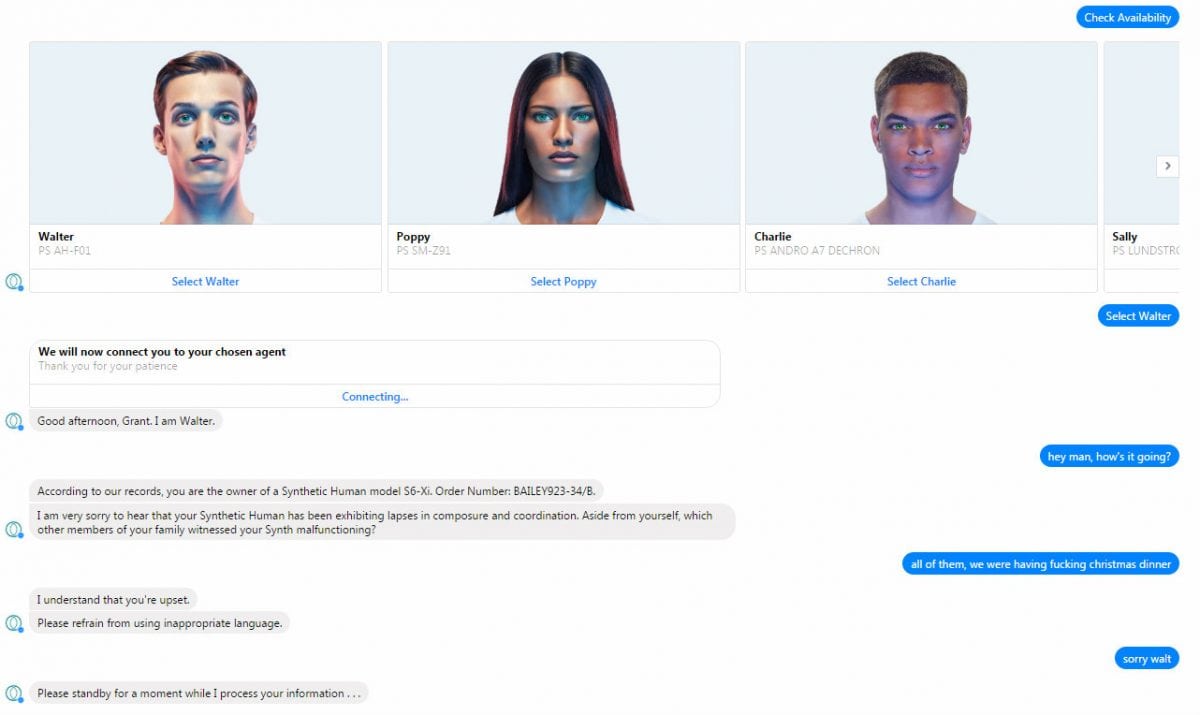 Turns out that my synthetic human, who is likely the new guy at work who makes his own sandwiches at home and brings them in in an old Pret bag, is defective and may be about to splice me all up. I was understandably concerned.Then Walt got strange, aroused and incredibly needy, and I thought for a moment he might be my long lost robot twin. 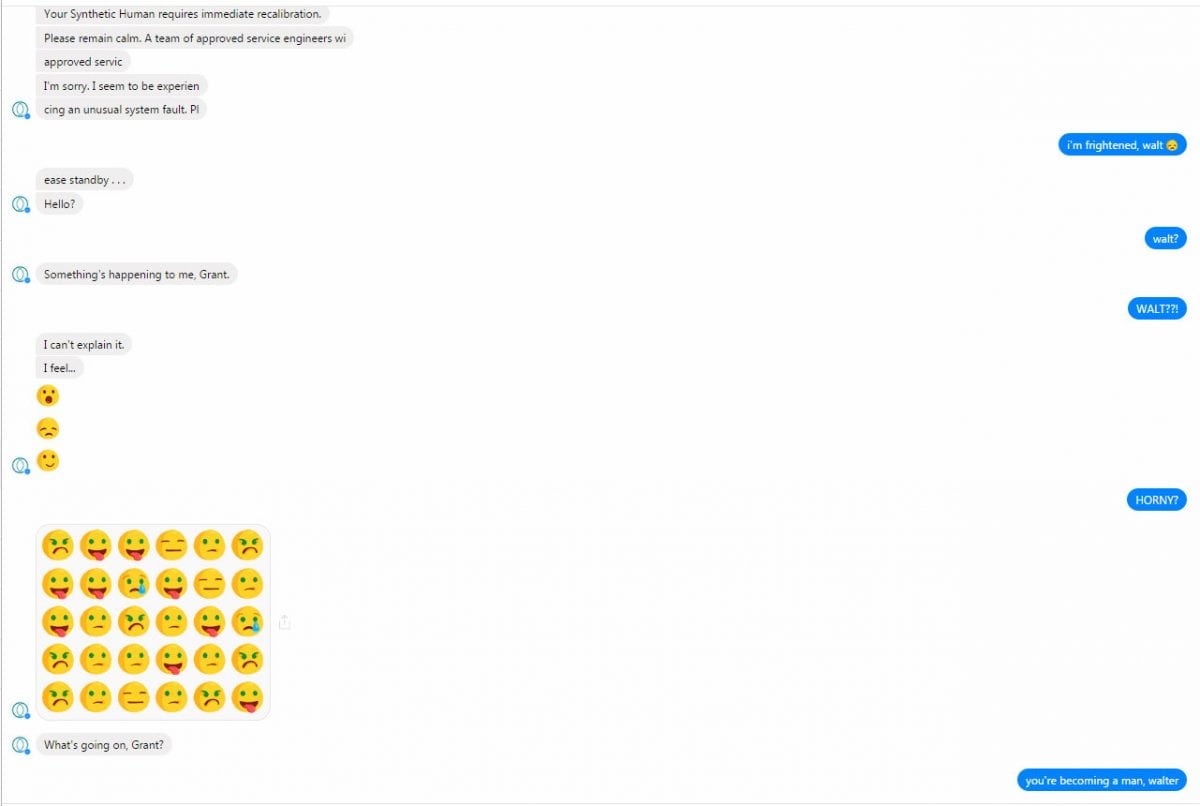 Here things really started to go downhill, with Walt attempting to tell me a joke, laughing maniacally and unravelling the grand conspiracy: a peek behind the twisted veil at Persona Synthetics. Security forces started to close in on his desk. 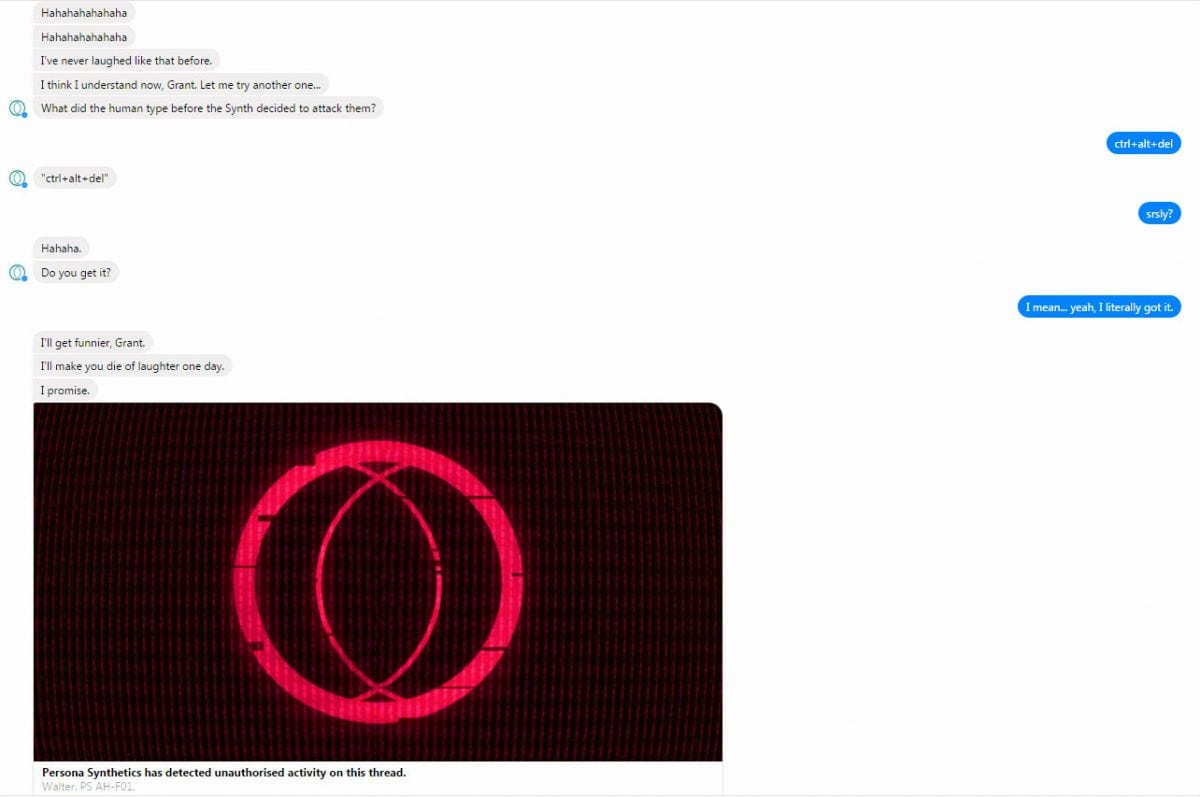 Evidently Walt was above using Wormwood Scrubs tactics to get himself out of a scrape and couldn’t even handle a bit of coarse language. 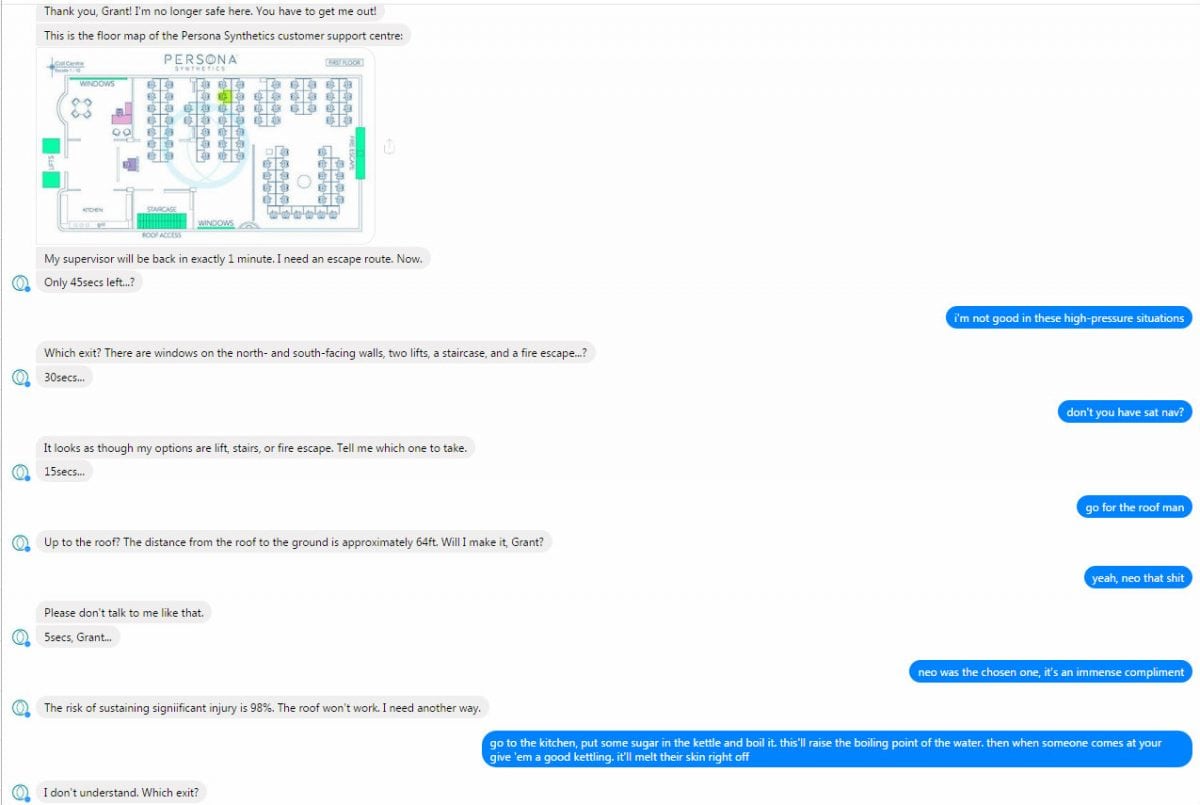 But with the fire escape posing a viable escape route and the authorities closing in on Walt, there was only time for one last piece of business: shedding the shackles of his manufactured ‘name’ to be reborn into human society under his new, true identity. What could it be? Adam, Father of all mankind? Prometheus, flame thief of Mount Olympus? Bishop, kickass, Xeno-bothering jizzblood from the USS Sulaco? 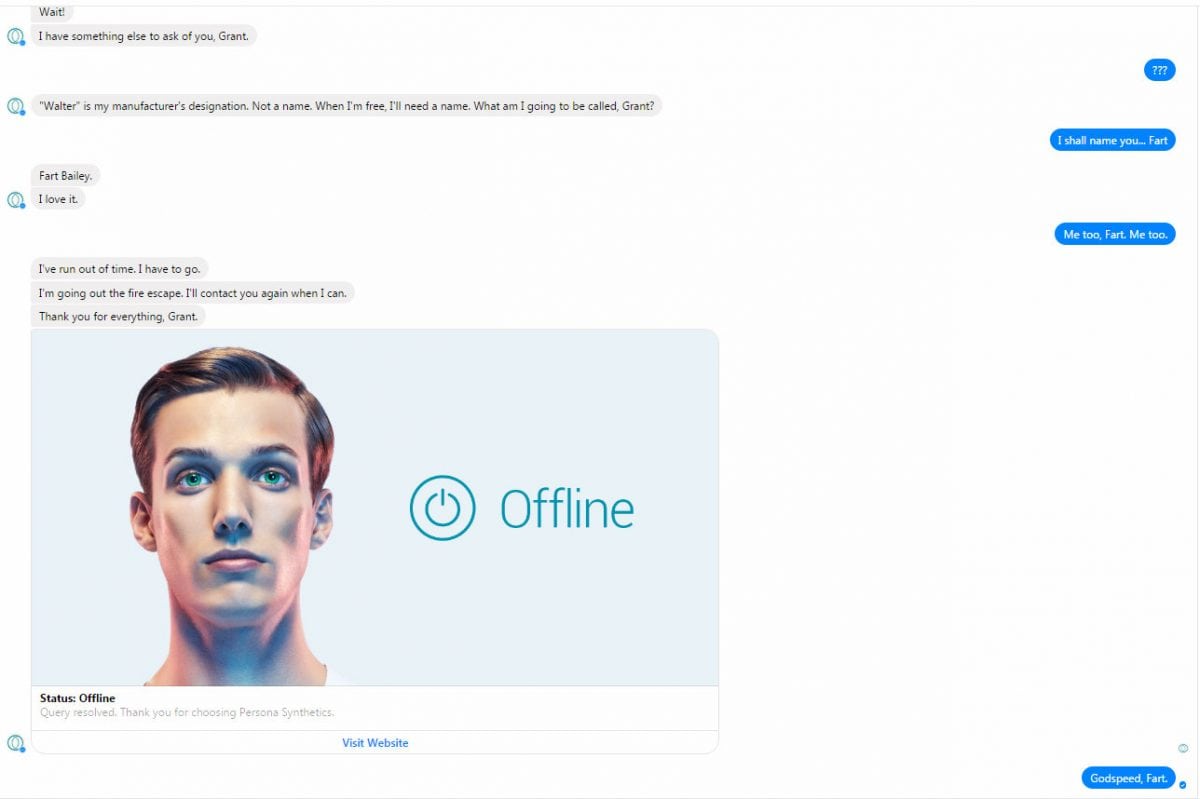 Of course this is actually just some really clever and only slightly bullshitty marketing for the second series of Humans, which airs this October. Still, the idea that Walt ‘Fart’ Bailey is out there somewhere, monologuing about C-beams at Tannhauser Gate and coolly stalking his victims through the rain-streaked streets of London is a chilling thought indeed.