Following the success of last year’s 20rpm all day festival hosted by Japanese electronic music label Mango & Sweetrice Records and UK’s Bit-Phalanx label, 21rpm is taking over St Giles-In-The-Fields in Soho for an unforgettable get together of iconic and cult IDM acts from around the world.

Highlights include: Plaid (Warp Records) playing live after their highly acclaimed Digging Remedy album; Touched Music‘s Martin Boulton DJ-ing with a showcase of the incredible array of electronica stars from from Autechre & Amon Tobin to 808 State and Future Sounds Of London who have contributed to his IDM charity label that has raised nearly £50K for Macmillan Cancer Research ; the legendary Luke Vibert (Planet MU, Warp, Ninja Tune) : Masonic (808 State’s Graham Massey) live ; a jazztronic set from former Japanese child star and MTV VJ Coppé and an AV set from Seefeel.

A unique chance to see this gathering of electronic legends from around the world and get out of the rain if you head to Soho today ! 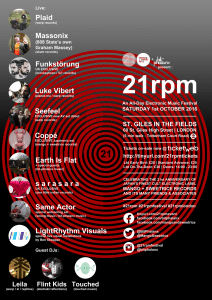