The skaters of the West Bank Jayyous Skatepark have been practicing tricks for a truly international production of A Skate Play – skatepark-based theatre first produced in Brooklyn, New York, five years ago.  This week the Jayyous Skatepark – built last year by international volunteers, skatepark experts from the UK’s Skate Pal project, and locals from Skateqilya in the […] 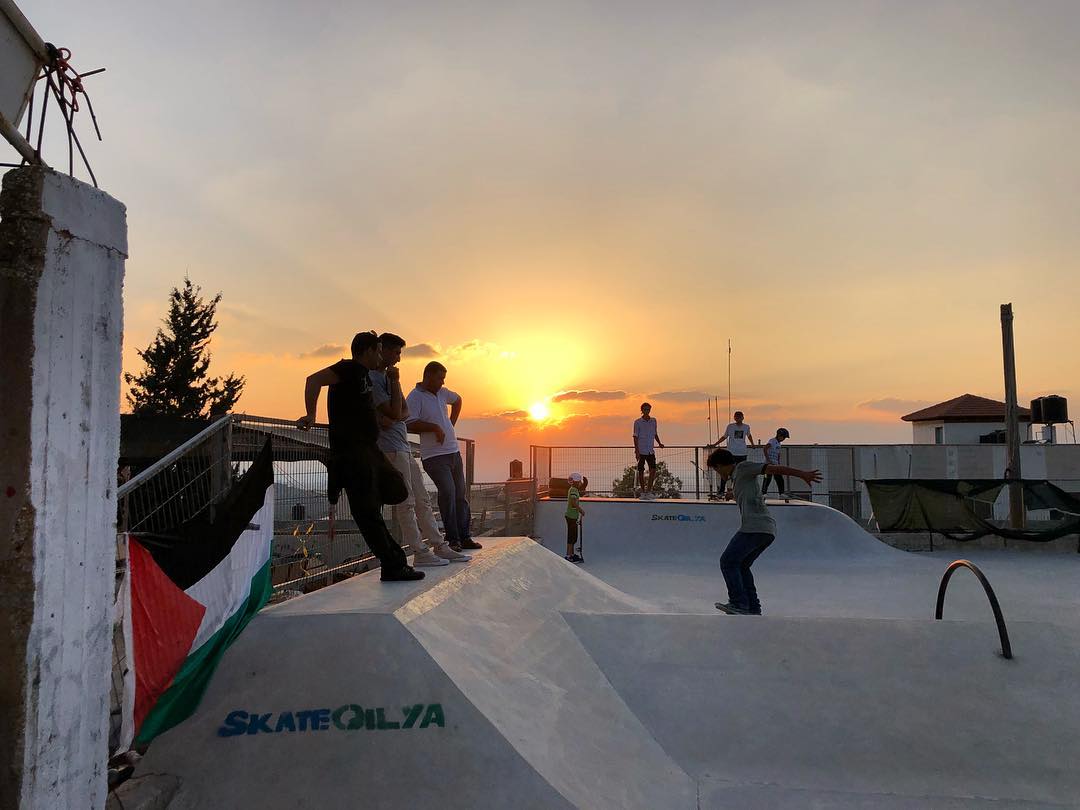 The skaters of the West Bank Jayyous Skatepark have been practicing tricks for a truly international production of A Skate Play – skatepark-based theatre first produced in Brooklyn, New York, five years ago.

This week the Jayyous Skatepark – built last year by international volunteers, skatepark experts from the UK’s Skate Pal project, and locals from Skateqilya in the small village near the Palestinian city of Qalqilya – is set to host free outdoor performances of A Skate Play Monday – Friday.

The performance, translated and adapted for Palestinian audiences by the Freedom Theatre of Jenin will be filmed to be shared with skaters around the world. The producers hope to continue to travel around the world with A Skate Play hitting other places with new and growing skateboarding scenes.

The play will feature two of Palestine’s up and coming skaters Abdullah Milhem and Omar Hattab as well as international skaters Lisa Jacob from Paris and Kas Wauters from Belgium.

The rest of the cast is made from local Palestinian actors, as well as younger skaters.

The small village of Jayyous has been under Israeli occupation since 1967, and in recent years has become increasingly affected by the Israeli-built barrier wall that now cuts off the ancient farming village from around 75% of the farm land it relies on, leaving half of the once-prosperous Jayyous villagers now dependent on foreign food aid.

The joint production with Eyes Up Here Productions from the US, Skateqilya and The Freedom Theatre of Jenin, Palestine is written and co-directed by Noelle Ghoussaini (above) (USA) and co-directed by Faisal Abu Alhayjaa (Jenin, Palestine). And produced by Nilou Safinya (left) and Esther Chang (right) who worked on the original Brooklyn production.

A Skate Play is inspired by the Richard Bach novella Jonathan Livingston Seagull, a fable about a seagull learning about life, flight, community, transformation and freedom.

Lebanese American Noelle Ghoussaini, who originally adapted the novella to an outdoor theatre production about skaters, had been working with The Freedom Theatre of Jenin – a cultural institution in the refugee camp of Jenin that has won international acclaim with recent productions, leading to collaborations with theatre directors from all over the world – when she started working on translating the production to Palestine.

Ghoussani’s original production replaced seagulls with the skating community – a community of outsiders, often eyed with suspicion, but an inclusive one, brought together by learning new tricks.

“Noelle read Jonathan Livingston Seagull aged 15 and had the idea of the birds being skaters and we wanted to do something free and for the public and for the youth,” says co-producer Esther Chang. “There were lots of parallels with skateboarding. Skaters are always trying to land a new trick and never stop trying, plus they are often regarded as a nuisance.”

The London Economic spoke to producer Esther Chang as she prepared for next week’s production in Jayyous, and we asked how the borders, walls and checkpoints that surround the village had affected the production.

“Every day there is something here to remind you of the occupation,” says Esther. “Every day is a struggle here in that we’re working with actors and they have their lives. One day two people got stuck in Ramallah as they closed the road. All the time people are being killed. A few days ago eight kids were killed in Gaza.

“From the skate park we can often see teargas. We will be skateboarding with the kids and some go running towards it others stay away.”

The Freedom Theatre of Jenin translated the original production of A Skate Story into Arabic and added their own idiom and cultural references to it.

“It’s hard not to see the parallels between the occupation and how the idea of freedom is explored in the story,” says Esther.

“Jonathan Livingston Seagull is about transcending societal norms and boundaries, overcoming obstacles. The main character practices and practices and perfects flying and comes back to his community to help them perfect their flying too. So there are lots of relevant ideas of community and going back to where you came from.”

The production has been funded through donations from friends, family and benefactors.

Esther and Eyes Up Here Productions want to take the play to other skate parks around the world, to places with skateboard scenes taking off. 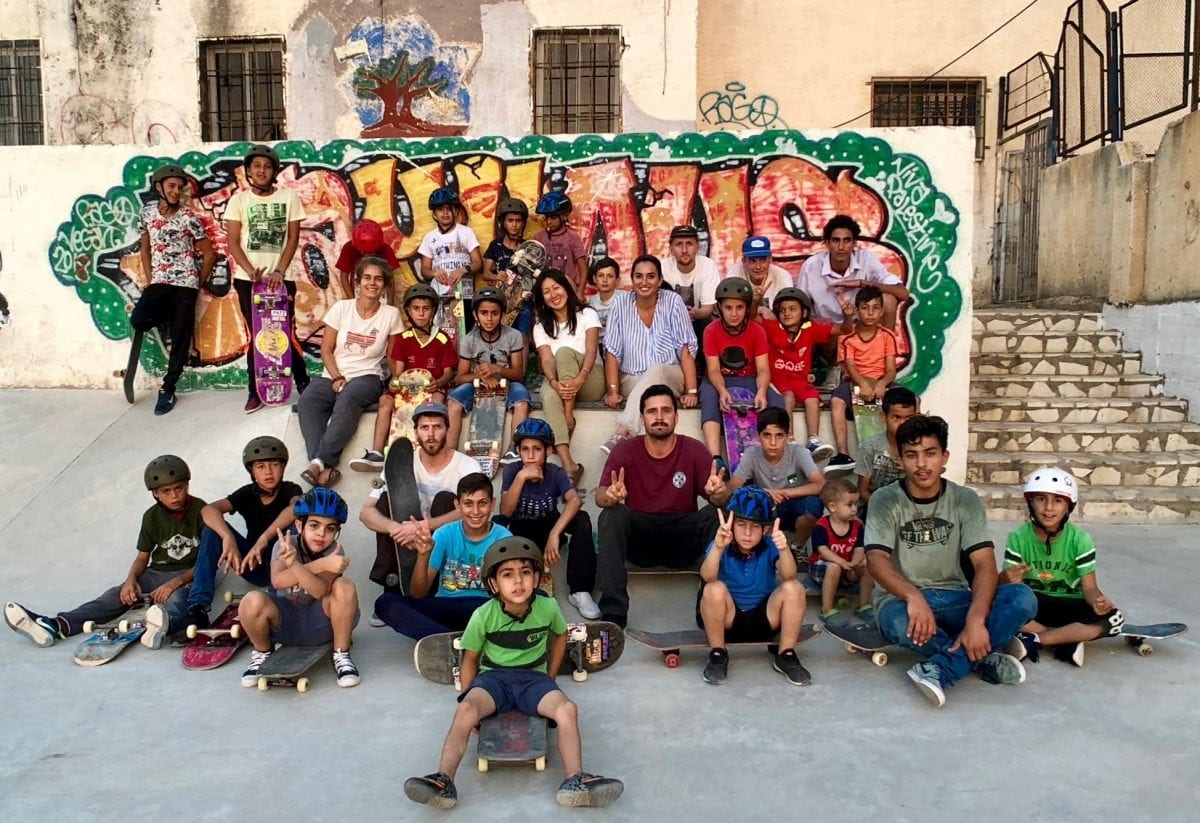 “For us skateboarding is more than just a sport,” says Esther, “Skateboarding transcends borders bringing people together from all over the world. It’s inherently egalitarian and skate parks are unlike other public spaces, they are somewhere people go who have one thing in common.”

“For us the main thing is engaging with youths to use their creativity and mind to go beyond borders.”

To find out more about A Skate Play: facebook.com/askateplay