A tall narrow bookcase dominates Iona McLeish’s set design on director Mehmet Ergen’s stage. It’s never ending length, reaching to the stars, and with a cherry tree exploding up and ripping through its belly, is a metaphor for Mme Ranevsky’s pipe dream that somehow her family estate will be saved and that life will continue […] 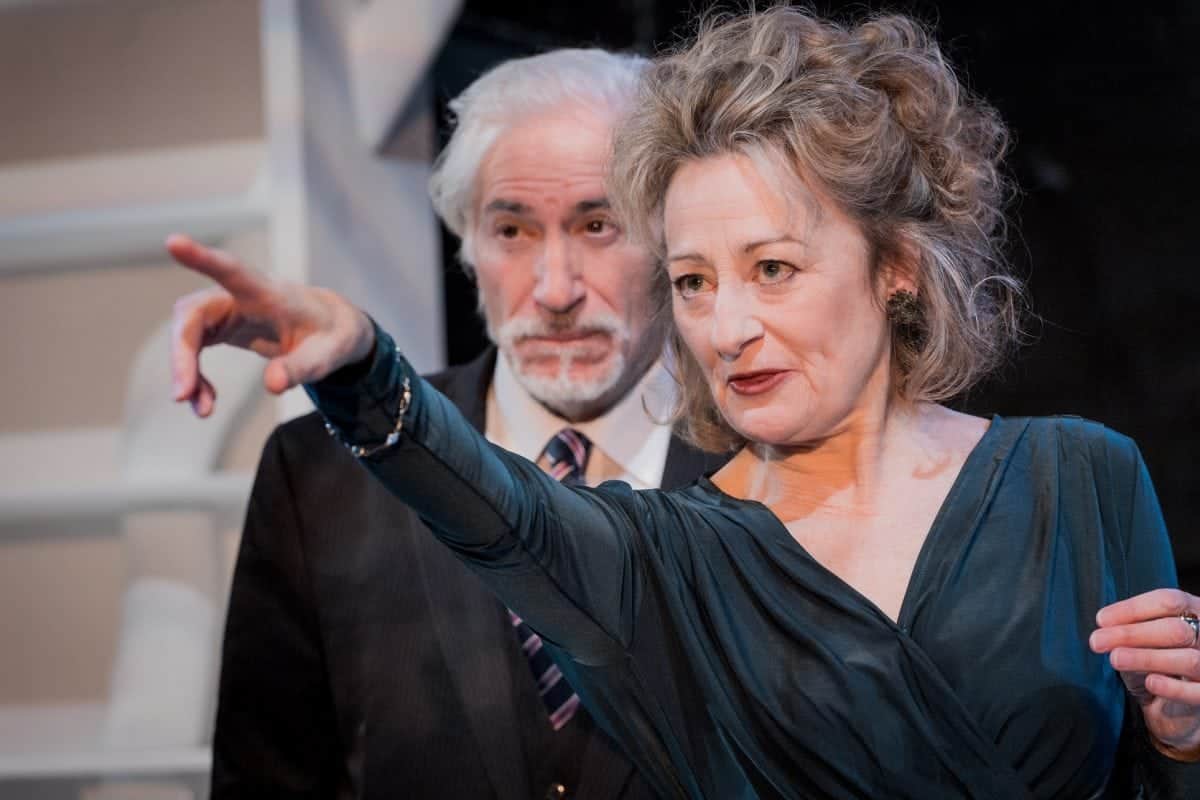 A tall narrow bookcase dominates Iona McLeish’s set design on director Mehmet Ergen’s stage. It’s never ending length, reaching to the stars, and with a cherry tree exploding up and ripping through its belly, is a metaphor for Mme Ranevsky’s pipe dream that somehow her family estate will be saved and that life will continue for her and her entourage as much as it has done in spite of the social, political and economic turmoil that will soon hit Russia.

Stubbornly oblivious and by turns Ranevsky and her brother Gayev recite celebratory monologues to it, the real only bit of sentimentalism present in the whole production. And apart from the chairs there is no other sign that these two are children of a landowner and the estate once supported the now emancipated serfs and that the family lived in resplendent grandeur. Ergen, perhaps in keeping with Trevor Griffith’s new version (from a translation by Helen Rappaport) is stripping things away, keeping everything minimal. The floor like a metal modern version of the polished surface in impressionist painter Gustave Caillebotte’s The Floor Scrapers, is an ice rink. The feeling is all cold, the boughs of the tree growing through the bookcase are like icicles, they look sharp enough to cut one’s flesh.

I am not sure what this does for the emotional temperature of the production. Ergen seems to be asking us to look at it from a slightly new perspective where the humour is very much highlighted- particularly by a wonderful Simon Scardifield as Epikhodov- so that a sense of nostalgia held by Ranevsky et al. and the measure of their loss of the estate, both in terms of the past and of the future- is slightly suppressed.

This means that key understandings- i.e. Lopakhin’s sentimental love for Ranevsky seem obscured. In fact, it seems that right from the onset Lopakhin does not really feel anything, perhaps he suspect’s that Ranevsky’s fondness is born out of her superior station over him, and out of the pity that this draws forth, rather than real agape. Yet, Jude Akuwudike’s Lopakhin is so focused on being a businessman that emotions don’t seem to register with him.

Despite Akuwudike’s wonderfully charged outburst when he bids for and buys Ranevsky’s estate, the estate that kept his father and grandfather serfs (it is an outburst I have never experienced from a Lopakhin before) there is no room for emotional complexity. This Lopakhin is ruthless and complacent with it, when he finally sets out to propose to Varya, we know all along that he will not. Yet, Jade William’s Varya is all caught out, her character is the one that develops the most in this production, at the beginning she is all prickles and closed like a cone in bad weather, by its end, she is hurting. Stoical, but hurting.

Symbolic of an ensemble well cast and balanced (yet at the expense of individuality?) Sian Thomas’ Mme Ranevsky seems to have neither sexual allure for those who hang around her family or command over her relations. This feels like a relief in some ways. And there’s a glorious moment when she shares a long look with her Parisian manservant Yasha that is more a sizing up than anything sexual.

We realise that in some ways, in moments of clarity, Ranevsky is all too well-aware of her plight and of the changes that are to come simply by acknowledging Yasha’s status in relation to herself and his obvious quest for social mobility even as Chekhov’s plot drives her to put her head in the sand like an ostrich. Ergen gets the connection or disconnection in Chekhov’s work between what we see and/or choose to believe and what we know.

Ryan Wickert’s Yasha too is a surprising and somewhat pleasing interpretation. His cruelty towards fellow servant Dunyasha is not crude or intentional, we see instead, although we may not like him very much, a young man very much of his times, socially aware of his opportunities and determined to make the best of them. Barış Celiloğlu’s Charlotte is also surprising. Gone are the sexual innuendos or any ideas that she is sexually repressed (so oft taught in schools) instead here we are asked to see her as a refugee, with nowhere to go once the house is sold.

There is less distinction in the relationship between the old servant Firs (Robin Hooper) and Jack Klaff’s Gayev. Firs’ painful dog like servility towards his master and mistress does not quite illicit the indignation that it should when Gayev in particular brushes him away in irritation or leaves him to kneel on a cold floor for too long. I kept wondering why this is.  Is it because Ergen wishes to entice from them and in us a world weariness (something we all must be feeling right now) and even complacency that the family has about their fate?

Certainly there is this sense with Abhin Galeya’s Trofimov who seems neither in awe of Ranevsky nor in contempt. And in his speeches the world weariness, reciting the global concerns that are still relevant now, creeps in to him and us. There is no fire in his belly, only acquiescence. One thing we do get though is that it is no less dangerous being a student in some parts of the world as it was then.

Nick Voyia’s Stranger jazzes things up, we see that he thinks (though he is wrong) that his time is near as he subjects Ranevsky et al. to his vagrant self righteous anger and violence. Although different, this is how we feel about Lopakhin and Jim Bywater’s Pischick, whose appreciation of the value of money means he is more able to recognise opportunity, unlike Ranevsky, who lends him money she has not got.

There’s a sense that the show belongs to the misfits. Lily Wood’s northern (what else?) maid servant Dunyasha and Pernille Broch’s Anya are caught by their social en-trappings and by their sex and by their status. At least Ranevsky feels something, but what does Anya feel, if anything? From the onset she is so detached. And poor Dunyasha feels too much and believes in social mobility, though she is inhibited by her sex and can only amount to “aping” her betters, rather than, like Yasha, challenging them.

Sometimes the adaptation feels as if it wants to make meanings too quickly, short hands like “idiot”  for insulting people do not feel exact enough to be relevant.

Leaving the production I had a lot of questions about the ambiguous and almost complacent tone. But, as I believe that a critic’s job is to ask questions and- perhaps- attempt to answer them- may be this production does its job.