Shocking video footage has emerged today of BBC producer Fergus Beeley’s road rage rant – and he has already been likened to TV’s misanthropic Basil Fawlty. John Cleese’s fictional character, who is the star of TV comedy Fawlty Towers, is renowned for his spiteful and abusive treatment of guests. But even his rants couldn’t beat the rage […] 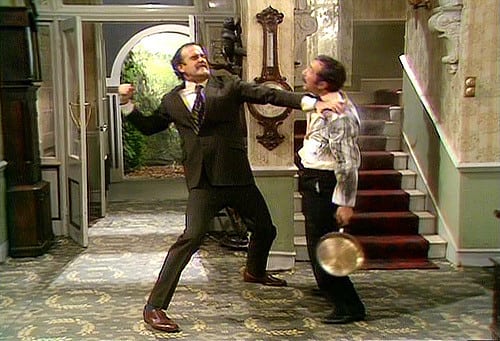 John Cleese’s fictional character, who is the star of TV comedy Fawlty Towers, is renowned for his spiteful and abusive treatment of guests.

But even his rants couldn’t beat the rage displayed by the producer behind many of David Attenborough‘s BBC shows.

Beeley flew into a “raving state” after his car was forced to pull over at the side of the motorway.

He was heard calling the family “w***ers” and “sl*ts” and telling them to “get back in the car before you die”.

To commemorate what will surely become the best viral video of 2017, we’ve compiled a list of the five times Beeley out-ranted Fawlty. Enjoy!

Whose fault is it?

A room with a view