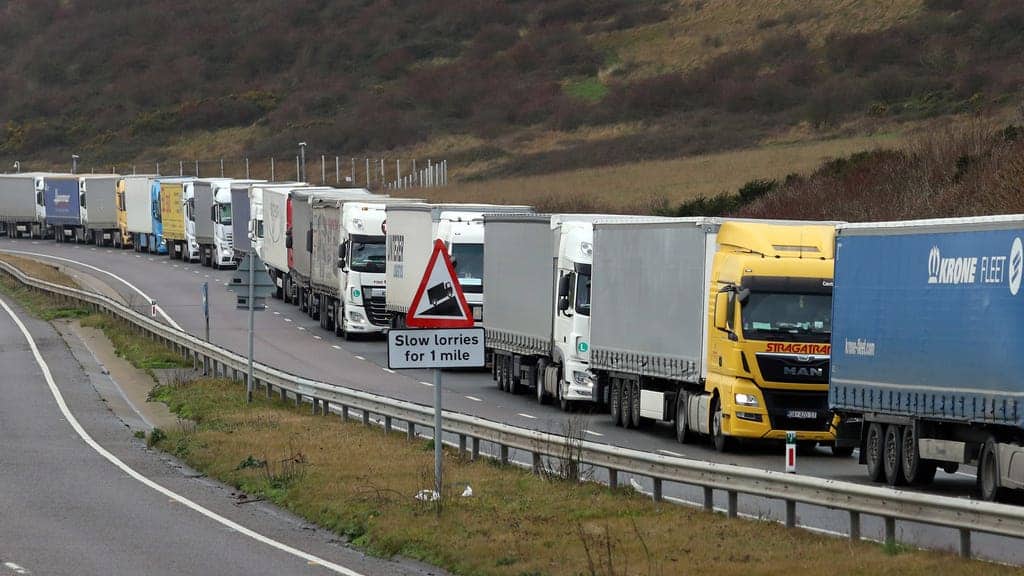 Three out of five manufacturing firms are suffering “significant” disruption because of border delays since the start of the year, new research suggests.

Make UK called on the Government to find an urgent solution to the problem, which it said has been caused by complex paperwork.

A survey of almost 200 firms by the manufacturing organisation found that three out of five were being hit by supply chain disruption, either importing or exporting to and from the EU.

Companies were also struggling to prove the UK origin of their goods in order to qualify for zero tariff access, said the report.

Put a hold on importing and exporting from the EU

Make UK said customs paperwork urgently needs to be simplified on both sides of the border, so it can be completed and checked quickly before haulage journeys begin.

Its report said: “The increase in paperwork and red tape at the borders has led to substantial delays for trucks, with many left stranded across the continent because of incorrect paperwork.

“Many businesses have already taken the hard decision to put a hold on importing and exporting from the EU in a hope that things improve, but this is having a serious commercial impact on companies already struggling to survive the current Covid crisis.”

Stephen Phipson, chief executive of Make UK, said: “Government needs to move quickly to get around the table with the EU to sort out ongoing delays at the border and rules of origin issues which are making business unworkable on both sides of the Channel.

“We are encouraged by recent constructive contact with Government to tackle these issues and that they looking to boost the number of customs agents.

“But finding a way to simplify customs declarations would mitigate against delays while an agreement on cumulation between the UK and the EU would mean that parts imported from regions outside the EU and the UK – like Japan and Turkey – can be counted towards local content.

“The deal as it stands also fails to provide for mutual recognition of professional qualifications which will pose a very significant problem for many industries as movement of key personnel to carry out work in the EU will be much more restricted.

“If a company wants to send a service engineer to repair a piece of equipment delivered from a UK company as part of the maintenance contract, they may not be able to carry out the service, as his/her UK qualifications won’t be recognised.

“There is also complex paperwork to be filled in to allow business travel.”

A Government spokesman said: “Thanks to the hard work put in by traders and hauliers to get ready for change, disruption at the border has been minimal, with goods flowing efficiently and no queues in UK ports.

“We are aware that some exporters are facing specific challenges. That’s why we have invested millions in the customs intermediary sector, set up export helplines and are offering businesses support via our network of 300 international trade advisers.

“For importers, we took the pragmatic decision to introduce new controls in three stages, allowing traders and hauliers time to adjust to new processes and prevent disruption to supply chains.”